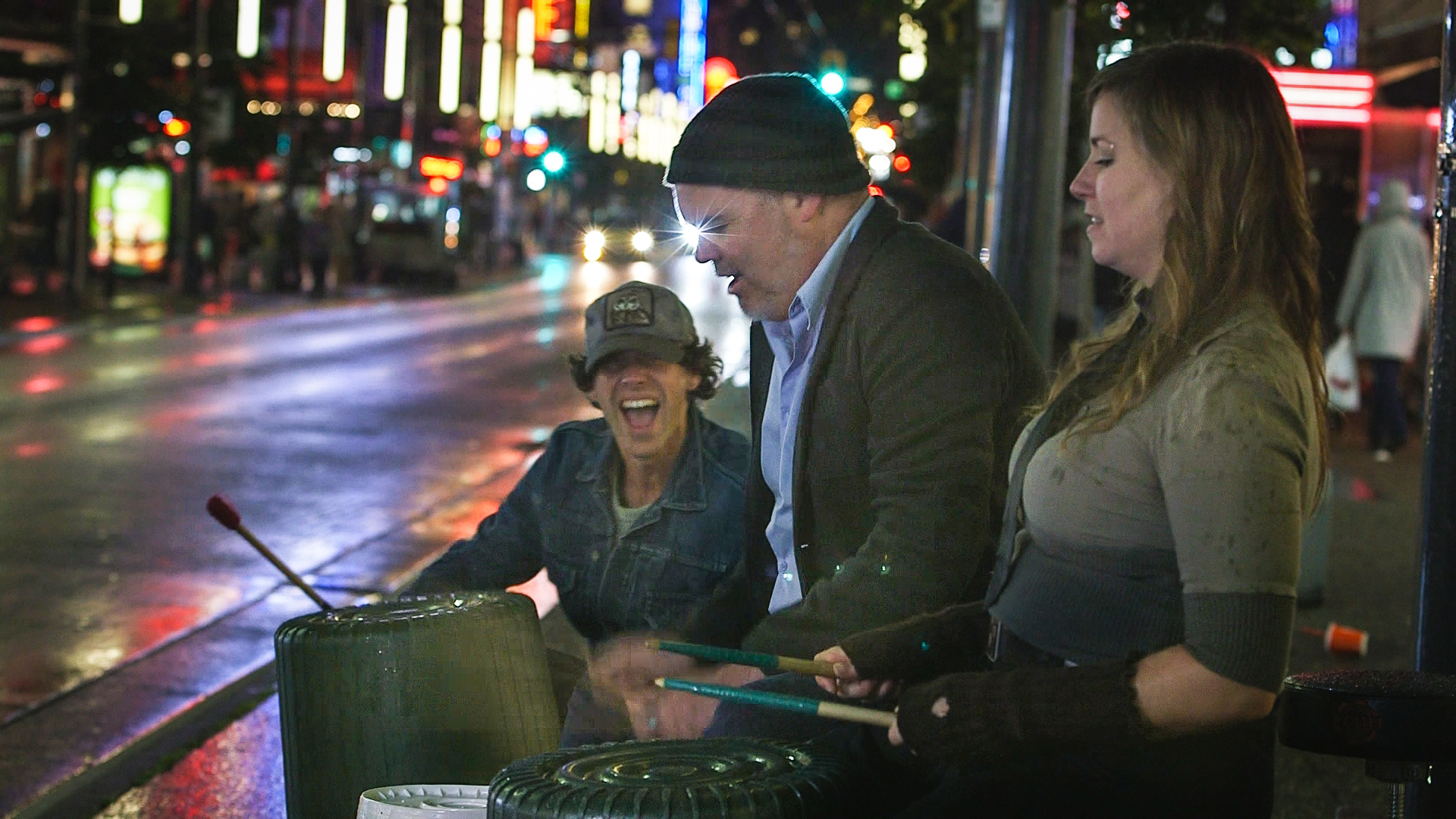 Vancouver is one of the most beautiful cities in Canada, however it’s nearly impossible for people to buy property due to the high housing prices. Charles Wilkinson’s documentary Vancouver: No Fixed Address examines the many reasons why buying property in Vancouver is so difficult. Whether it is offshore buyers moving in or lack of regulations or high mortgage rates causing people to live in their vans, Wilkinson addresses the key issues hearing from everyday Vancouverites to specific experts in their fields who are keenly aware of some of the challenges. The film beautifully captures why people love this city with sweeping shots of the ocean views set against the majestic backdrop of the mountains.

Vancouver: No Fixed Address is playing at the 2017 HotDocs film festival and I had the pleasure of discussing this complex and frustrating issue of housing with Charles Wilkinson.

Why did you decide to discuss the housing/real estate crisis in Vancouver now?

Charles Wilkinson: For the last half a decade, I have done a series of films that are sort of about the environment. Vancouver is my environment this is where I live. The news cycle for the past three or four years has been that the city is under attack and at a certain point you start to wonder is there any truth to it. It suddenly became very clear to me that this is an environmental story.

What did you discuss with your DOP (Director of Photography), for capturing the beautiful landscape of Vancouver?

CW: Actually my partner, wife and one of the producer’s Tina Schliesser and I shot everything. We were the DOP and we talked about it all the time. Most of my career has been in dramatic filmmaking: TV movies and episodes. Aristotle had this expression he said, “Every story ever written is about the sympathetic hero on a vital quest against insurmountable obstacles.”  I believe that is true so I always look for the sympathetic hero in this case Vancouver is our sympathetic hero. You have to show why Vancouver illicites deep feelings of love, affection and loyalty in the people who live here. One of the reasons is the natural spectacular beauty of the place, so that was really important to build that factor into the story.

There were some great crane shots overlooking the landscape of Vancouver, why did you decide to put those in?

CW: To gain some kind of perspective. It’s really hard when you stay on the ground to sometimes see where you are. And one of the really unique things about Vancouver is it’s impossible to get lost because all you have to do is look up and see the mountains and you know where you are. I felt it was really important to create that context. Also you see such cool stuff above the city. For example there’s the downtown core, surrounded by acres and acres of single family dwellings, that’s not really typical. The part of being so distinctive about Vancouver [are] these single family dwellings.

CW: It is a really complex discussion and whenever people talk about this issue somebody will try to make a [different] point. If you are talking about city economic of today somebody will jump in with a comment about race and suddenly the discussion just goes sideways and you don’t get anywhere. My partner and I and, my executive producer Kevin Eastwood, and the guys at Knowledge Network tried to do is keep the discussion on the rails, so if you want to talk about race let’s talk about that, if you want to talk about the economics let’s talk about that, and hopefully we’ll possess a little bit more clear understanding of what’s going on.

You sourced many different subjects in the film, how did you connect these subjects to your film and how did you initially research the film?

CW: We kept our ears to the ground. You can’t go to a coffee shop, you can’t go to a bowling alley without the person next to you [saying], “Oh over-asking…bids.” It’s just everywhere. When you hear someone having a conversation it sounds like they may be well informed, [I’ll] start talking and say, “Well, what’s your experience?” Some people just fell into our laps and other people we had to work really hard to get.

It became obvious that we needed to talk to somebody who knew about the corruption and the money laundering. That’s not something [we] know anything about. We needed to find people who know the way that government regulation or lack thereof has contributed to this. We develop a wider and wider network of [people] who are super well informed. For example, we have a really dear friend who’s a retired Supreme Court Justice and she put us [in touch] with someone who explained how money laundering works and they explained how government processing works. At times I felt like J.J Gittes, from the movie, Chinatown. You think you know what’s going on, but you don’t know what’s going on.

Did you personally face any sort of challenges in making a “talking heads style” documentary?

CW: When I went to film school we just scorned talking head [documentaries]. It was seen as such a lame old fashioned way of telling a story, but over time I’ve come to the understanding that it can be a really conversational way of understanding what’s going on. It’s a interesting way to get to the heart of your characters. People will release and they’ll start to open up and it’s not just information that they’re giving. You really see their heart and I feel very strongly about that. When I interview someone for example the mayor of Vancouver, first of all you have to respect his office. In very very polite at the beginning of the interview I said, “I appreciate that you have your talking points and I appreciate that you have a message you want to give out, but I want to be honest with you, probably most of the stuff won’t make it into the film and I just want to hear what you as a human being feel about this.” People have commented on Gregory’s performance, if you want to call it that in the film and they say, “Gee it seems like really cares about homelessness.” You can actually see that [this] grades on him and something that’s he’s passionate about. You often don’t get that from people. That when somebody does let their guard down [it can] be an electrifying moment.

During the film there were a lot of shots in between interviews where you had musicians playing in public spaces in Vancouver, why did you include that perspective in the film?

CW: Vancouver is an incredibly musical place. I think it’s partly because our climate is warmer than most other cities in Canada. You don’t notice it if you live here but there’s a busker on every streetcorner. I sympathize deeply with anyone who’s in the arts in a place like Vancouver. I has become increasingly difficult to exist as an artist in this city. Some of the musicians in our movie have been evicted from their homes because of rent increases. Rent doubling. There’s irony to that, that’s pretty disturbing. Like, Sam Cooperson at the end of the movie that 30 to 40 % of people here tell pollsters don’t feel that this province is their home anymore. That they just can’t make it here. It’s impossible to come up with any kind of solution until you understand the problem.

Was there a perspective you wanted to include in the film, but you had to edit out due to time or the overall tone of the film?

CW: There were a number of things that we lost. The one I felt most deep regret about was the money laundering and corruption part of the story. We had some of the most amazing information. We show the movie as we’re working on it, with a group of people who have helped us for all of our shows. The opinion the the money laundering was divided in half. Half of the people went I don’t get it and once I do get it I don’t care. The other half of the people said, it’s so incredibly important I don’t care about anything else in the movie I just want to know more about this. The money laundering and organized crime is here in Vancouver [is] unbelievable. Obviously it’s a huge part of the real estate story, because a lot of the money that’s buying homes is not tracked at all. It’s just a different movie.

There were some great moments with your subject who used to be a cinema manager who now is semi homeless living in his car, such as when you interview him while he’s looking in the sideview mirror. How did you collaborate with him on the film?

CW: Maurice is a very easy guy to talk to [and] he seemed to understand our process. I would say, “Okay Maurice, I wonder if you could just explain what you’re doing here?” He’d take a breath, he’d settle down, he’d say, “Yes I do live in my van, because I’m on a pension so what else am I going to do?!” He’s such a wonderful storyteller. So when someone’s comfortable like that in front of the camera, it sets me free to just take a step back and see where’s the best vantage point which to hear this story. What I saw was a man who lives in his van, so I tried very hard to express that. People really like Maurice, he’s a really likeable guy. People actually cheer in the end when he gets on the plane and goes to Mexico because everybody was feeling so sorry for him and then suddenly says, “Hey I’m out of here.”

A fashion design the the film describes Vancouver as a place to “hang out,” which was a foreign concept to her friends in New York or Toronto, did you have any footage that captured that sensibility in Vancouver?

CW: There was this sequence that we had in the movie until the very end and then when we were condensed it was just really hurting the narrative. Last year, we went down to the 4/20 event in English bay. There were like 100, 000 people there. It’s like a circus atmosphere there’s all these wonderful sort of vaudeville performers on stage doing these weird circus acts. Swallowing swords and breathing fire, I mean it’s sexy, it’s moving, but then at the moment of 420 we got this crazy countdown and you see these people running through the crowd throwing out joints. They’re counting down, 3, 2, 1 and at the moment of zero you have a 100, 000 people spark up between 1 and 3 joints each all at once. It looked like the crowd had been hit by napalm. I’ve never seen anything like it in my life. When we had it in the show people would laugh and laugh and laugh. They [say then], “Oh that really makes Vancouver look horrible. The guys in Toronto are going to hate this they’re going to think we’re all idiots.” [Calmer] people would say, “Oh that really feeds into a narrative that is really negative about Vancouver and it overstates the work life balance we are trying to achieve.” I really agreed with that point so we lost the scene, but it’s one of my [biggest] regrets, because it’s such a wonderful piece of exposition about how certain segments of Vancouver live.