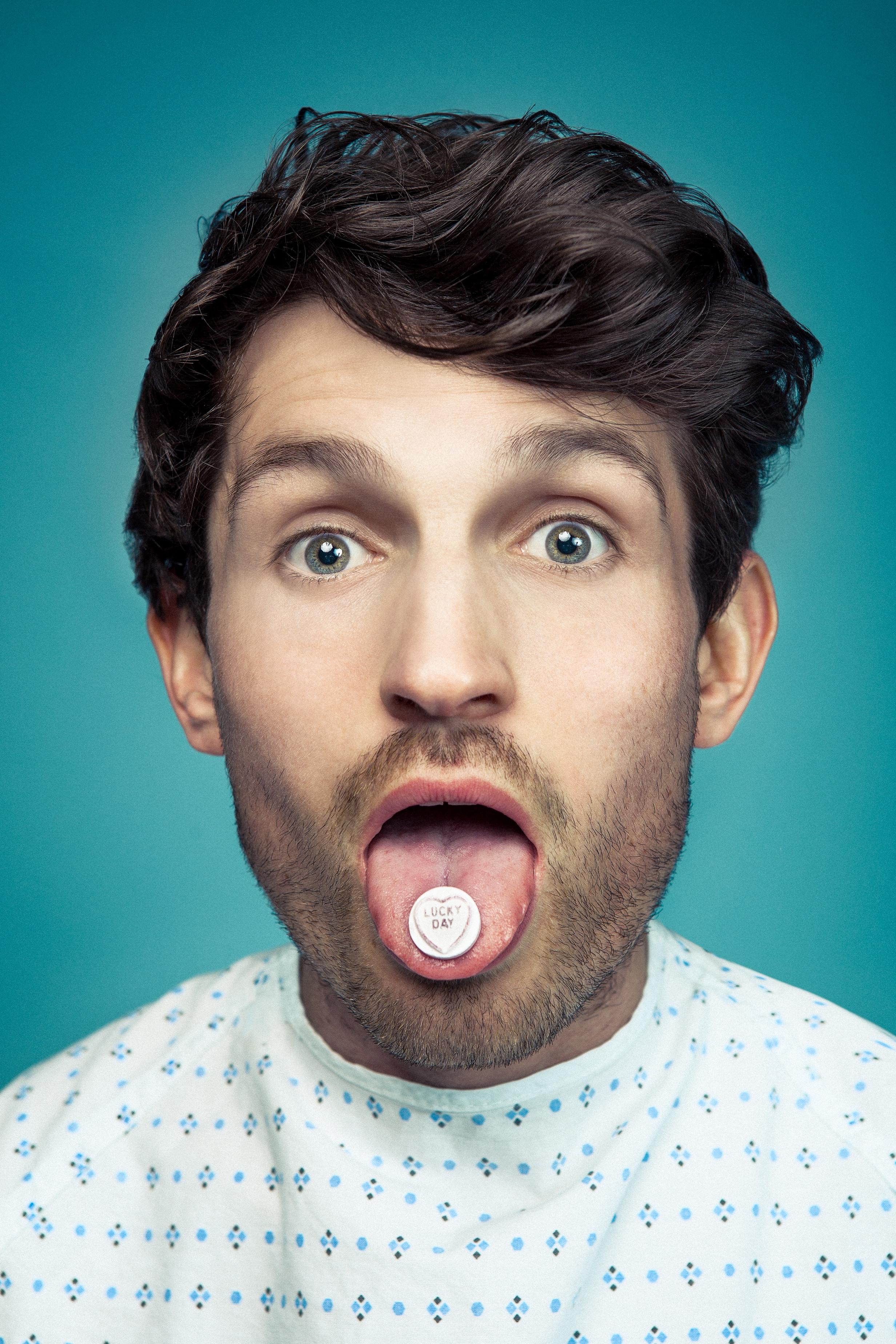 Toby Peach graduated from East 15 Acting School in 2010 and since then has sought to make his place in the theatre world. He qualifies himself as a theatre-maker, director, actor and facilitator who loves coffee, music and running. In 2015, he debuted his self-penned solo show The Eulogy of Toby Peach at the Edinburgh Fringe Festival. The Eulogy of Toby Peach tells the sad but heart warming story of Toby’s battle with cancer at a young age. The play was a wild success and Toby has since been touring the UK telling his story to as many people as possible. As a MyTheatre Award nominee for Best Original Work, we thought we’d ask Toby a few questions about himself, the show and his love for theatre.

Do you remember your first experience with theatre?
As a Christmas treat, when I was 11/12, we went up to London on Boxing Day, as parking was free then, and went off to see my first show on the West End. I remember being sat in the big theatre and being absolutely entranced by the roller skating madness of Starlight Express. Later I realised we only went to see it because my Dad is a train fanatic! We bought the soundtrack as we left but, sadly, I never learnt how to roller skate.

What made you want to turn your story into a play?
I wrote a short story about my experience of cancer for Battersea Arts Centre’s storytelling project, London Stories, about a year before I started The Eulogy. This was the first time I had talked about what had happened and it was the first time I realised I knew nothing about that time. I knew nothing about the disease, nothing about the treatments and had instead chosen to run away from this major moment in my life. It was then that I went away and starting research, reading the autobiography of cancer (a dark read for the commute home), speaking to my old chemo team and doing what I had been told never to do; I googled cancer. All of this lead to the realisation that I wanted to try and make this difficult subject matter a little bit more accessible. As if it is going to be 1 in 2 of us that will experience cancer directly, then we should know what we potentially may face and, importantly, know what we have and must continue to strive to do to give patients an element of hope.

Which is more difficult to put on stage- the truth or the lie?
I think in this instance it was definitely the truth- the process of making the show was a very exposing experience and I delved into moments that I had perhaps tried to move away from, to protect myself. These moments were so important to talk about though as a lot of them were parts that I had lied to myself about. I felt I needed to go to those places with the subject matter as it is part of so many lives and so many people lose their lives to cancer, that I felt that fictionalising it would do a disservice to not only my own history, but also those affected by it.

What are some of the biggest challenges of a solo performance?
I’d never done one before, and had never planned to, and I didn’t realise the energy that is needed to keep the show driving along. Managing the performance, in a way, by knowing when you can take a breather and when you need to put your foot down has been a huge learning curve. With The Eulogy as there are quite a few moments when we use tech you also need to have trust in that person behind the desk up in the tech box. I’m fortunate to have found a tech team who are extremely supportive and who I can trust to have my back and allow me to get on with the storytelling.

How did you approach differentiating the many different characters you played?
We made an important decision during the devising process that we weren’t going to try to hide the similarities between Toby and The Host, but to ensure their intentions were clearly different. Cancer, being just you trying to kill yourself, allowed us to do this. We have developed the characters so that we have moments where we care for this young man but then immediately can hate the host- it has been fun to play and as the piece has developed I have enjoyed playing the differentiation. Though, declaring before each show that ‘Toby, tonight I’m going to kill you’ to the mirror, to reach that intention for The Host, is, I’d be the first to admit, slightly dark.

Why is there such a huge amount of colour in the show?
Colour became pivotal to showcasing the stark reality of the hospital vs the Roald Dahl-esque world of the Cancer Club. The colour allowed us to dive away from what people so often think of when we discuss Cancer, that bland nature of the hospital ward, and it felt important to me to find ways to make this world accessible to an audience. I loved trying to find ways to make the audience love the world of the Cancer Club, and the host, when they know they don’t really want to.

Is humour as important in your life as it is in the play?
Humour was a way to cope with what was a very strange situation to be in and we would always tried to make light of the situation we were in, perhaps to keep the other feelings from rising up. Fortunately for me that gave me plenty of material for the show! It is also the way to, again, make it accessible to an audience as no one would have come to see me ramble on about the world of cancer and the science of cancer without those moments that make you laugh. When I was making the show I was fortunate to work with Dave Jackson, who is a brilliant comedy writer, who helped me carve out the comical moments and make sure the punch line landed.

What inspired the title of the play?
The definition of a Eulogy is a ‘Celebration of Life’ and that was what I’d wanted to do. I wanted celebrate the reason why I was able to read my own and that someone else did not have to do it for me, yet. Actually the title has been a cause of difficulty in the making process as in earlier versions I did play around with it being my actually funeral and the premise that I may have died. This was an idea we, thankfully, moved away from!

Did you have a favourite moment in the production?
The end (!) because it is the time when I put together the answer to the question I pose at the start, and I have been posing in making this show, how am I still here? It also is the hardest part as the one of those reasons is our NHS and, since I started performing the show, it has faced more and more cuts and privatization, leaving it in the state it is in now. It is the line that honestly breaks my heart everytime.

What were you hoping audiences would take away from the show?
An understanding of what cancer is and what a cancer patient may go through, but also, most importantly, a sense of hope. The shocking fact is that it is now 1 in 2 of us that will have cancer and, sadly, everyone in the audience will have some link to it in the future. I hope the show offers support to those who will face those challenges and those who will be there with them, but, importantly, that it also delivers that element of hope. Only thanks to our progression in fighting cancer was I given a chance of living and as we continue to research, support and discover I hope more lives will be saved. Lastly it also, hopefully, highlights the role of the NHS and the pivotal role it plays in saving lives in our country and how we must defend it.

What are you doing now/ what’s your next project?
We are currently touring The Eulogy across the UK, and have reached over 2000 people, so far. We’ve had a tremendous response from charities that want to bring the show to their supporter groups and we recently had a tremendous evening at The Criterion Theatre for our West-End debut for Bloodwise, to over 350 people. I’m also looking at other ways to tell the story to reach different audiences, as, though my passion for telling the story in its theatrical form hasn’t finished, I want to ensure I’m reaching audience beyond those who choose to come to a theatre. Excitingly, we are looking at ways to develop a graphic novel version of the show that can be made available to young patients who are trying to understand a diagnosis or those who wish to understand the world of Cancer a bit more.

Through the many conversations I have had after the show with young patients I also have become increasingly fascinated with the other side to Cancer, and telling a ‘moving forward’ story. There are over 100,000 young people (in their 20s and 30s) living with or beyond Cancer and, Suleika Jaouad best describes it in the NYT Times ‘in some ways the hardest part of my cancer experience began once the cancer was gone’. I am hoping to develop some work that focuses on that step, one that perhaps doesn’t focus on Cancer, but on how we live.

Do you have anything you’d like to add?
If anyone would like to come and see the show we’d love to see you. Head to www.tobypeach.co.uk/eulogy for all the information on the tour and the show.