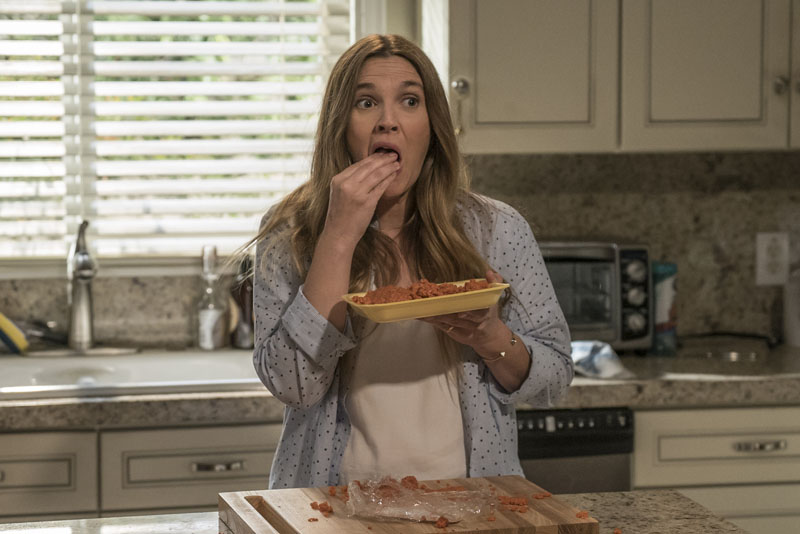 Netflix needs to slow down. They appear to be operating under a “the more the merrier” business plan and at a certain point that level of saturation cannot possibly support itself without more quality control. I’m not saying they need to stick their head into every project to the extent that, say, NBC does but a little FX-style curatorial action wouldn’t be the worst thing in the world. Case in point: a zombie comedy starring “average dad” Timothy Olyphant with Drew Barrymore giving the worst performance of her career as a suburban realtor turned zombie-who-doesn’t-follow-any-conventional-zombie-mythology-rules-so-she-can-still-look-hot? Why do we need this thing?

The pilot is 75% vomit jokes and/or actual vomit, 5% a thin little allegory about consent featuring a very lost Nathan Fillion, 10% Range Rover product placement, 10% Olyphant looking confused while shopping. Though I suppose we shouldn’t be that surprised when Netflix’s patented creator free reign is granted to the likes of Victor Fresco (aka the luminary behind such reductive gems as Sean Saves the World and Man Up).

Sure, sometimes a “let’s give it a shot!” attitude can result in a groundbreaking multicultural female-led ensemble gem that breaks genre rules and tell some of the most heart-shattering and boldly unapologetic stories ever on television (Netflix’s second original show Orange is the New Black will always be my favourite) but it feels to me like the open doors at Netflix are just making creators lazy more than anything. So now we have a suburban zombie sitcom starring Drew Barrymore. Woot.