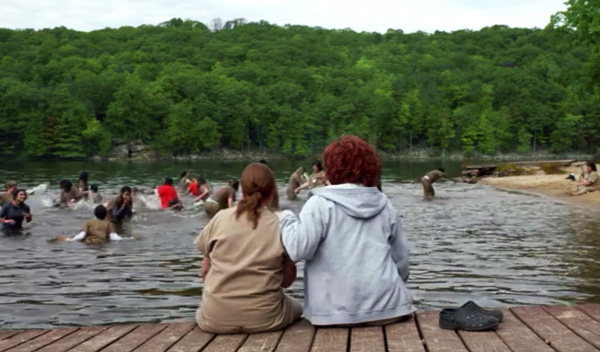 Season Wrap Up: Orange is the New Black

OK. I just finished season three of Orange Is The New Black (“Don’t Make Me Come Back There” and “Trust No Bitch.”) and I have so many feelings. Will Stella come back? How could they do that to Sophia?

So, first of all, Daya finally went into labor in “Don’t Make Me Come Back There.” It feels like we’ve been waiting forever for Daya to finally have that baby. And we got to see more of Daya and Aleida’s dysfunctional relationship. Aleida tried to be a good mom and send Daya to camp when she was a kid, but she got insanely jealous when Daya actually liked it.

In the present, Daya was pissed at her mom for basically trying to sell her baby, so Aleida called Pornstache’s mom and said the baby died. Then Daya got to keep her baby. But in a sad twist of fate, Cesar was arrested and the baby was taken away.

As far as the other storylines, let’s start with some good news: Morello got married! It was pretty adorable.

Okay. Now onto the bad news. Alex had been freaking out that someone was after her throughout the season. And it turns out she was right. In the last episode one of the new guards revealed he was hired to kill her. And we don’t know if she survives! I have a feeling she will though. What would OITNB be without her?

They wrapped up Pennsatucky’s storyline by having Pennsatucky fake a seizure to get her out of driving duty, only for someone else to take her place, which is going to be absolutely terrible.

Soso, meanwhile, had a really tough season. She ended up trying to kill herself, but Poussey found her and saved her. By the end of the season Soso had finally found her group.

The two most intense storylines were with Sophia and Stella, though. Following Sophia’s confrontation with Mendoza, a group of women attacked Sophia. She was then taken to solitary confinement for “her own protection,” but in reality it was to make sure she didn’t tell anyone what happened. It was absolutely heartbreaking.

Caputo was going to help Sophia, and the other guards with their unionizing, but Figueroa, who Caputo’s sleeping with now, advised him to take a promotion.

Stella, meanwhile, was freaking out that she was getting out soon so she stole Piper’s panty money out of desperation. And Piper hit her back hard. She planted all of this contraband and had Stella taken away to max. I was furious and Piper had been starting to get on my nerves this season already. Sure, Stella shouldn’t have stolen, obviously, but that’s just cold. So will Stella be back? And will she get revenge?

Season three ended in the best way, though. With Caputo ditching the other employees, they decided to stop working. Meanwhile, the guys fixing the fence left a hole so all the inmates ran outside and went swimming. Cindy even got to finish converting to Judaism. It turns out she became really serious about it and gave an amazing, emotional speech about what it means to be Jewish, which I loved.

However, while they were out swimming, the inmates didn’t notice the new bunk beds being put in or all of the new inmates who were arriving. It was the perfect setup for season four.