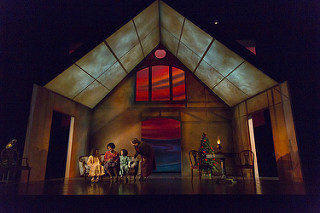 As the curtain went up on A Doll’s House, I was instantly pleased and very impressed by James Noone’s set design. The Huntington Theatre Company so often errs on the side of banal hyperrealism in its sets. While the gorgeous visuals and almost painfully precise attention to detail of those designs are obviously the result of great talent and a fair amount of funding, too often they offer nothing in the way of interpretation of the play being staged.

Noone’s rendition of Nora and Torvald Helmer’s home is spacious and elegant, with large windows and doors that a giant could easily peek into. But after you’ve been in this home for a while, you notice that the décor is more barren than minimalist, that the walls have just the faintest tinge of greenish mold—hinting rot or decay—and that the light that filters through the windows is muddied and ominous (lighting design by Dan Kotlowitz). The Munch-inspired painted backdrops are bold and terrifying in their bright colors and violent swirls of paint.

The bold set design was an auspicious indication that we were not in for a stale restaging of Henrik Ibsen’s classic play. The text was adapted by Bryony Lavery, one of the few female translators of the play, and directed by Melia Bensussen. Overall, the production is piercing, poignant, and shrewdly staged.

We are in the Helmer household for three days, from Christmas Eve to Boxing Day. Nora (Andrea Syglowski) buzzes to and fro in the midst of holiday preparations; as she recounts to a surprise visitor, her old friend Kristine Linde (Marinda Anderson), she is thrilled about her husband Torvald’s (Sekou Laidlow) promotion at his bank. She confesses to an old debt that has kept her on edge for years, an illegally borrowed sum she used to save her husband’s life. Little does she know that soon-to-be-fired Krogstad (Nael Nacer), an employee at Torvald’s bank, will stoop to blackmailing her to avoid losing his position. She leaves her little children (Kinsaed Damaine James and Zoë Adams Martin) in the care of nanny Anne-Marie (Adrianne Krstansky) as she struggles to come up with a plan, whatever it will take to save the couple’s reputation.

Much of the production’s zest comes from excellent supporting performances. Anderson and Nacer’s scenes are as dramatically tense as those of the protagonists, and Jeremy Webb as Dr. Rank, a practically live-in friend of the Helmers, offers much needed humor and humanity to the story.

But most of the weight of the play is carried by Syglowski, and not just because Nora is given so much stage time. Syglowski’s Nora is hard to pin down. She flutters with loud nervous laughter one minute and sinks into pensive silence the next; we can see the childish and impetuous child Torvald thinks he is married too, and we can also see the intelligent woman who has skillfully hidden a secret for so long. It’s an excellent performance, and I would happily have sat through more Nora-focused scenes than even the play provides.

Unfortunately, Laidlow’s Torvald does not keep up. Torvald is a character easy to vilify, and tempering his condescension and narcissism enough to show he is a typical product of society is no easy task. But Laidlow’s performance was so mannered and static that Torvald’s emotional arc did not register. The entire resolution of the play hinges on Torvald’s reaction to Nora’s secret, but Laidlow’s performance did not have the strength or compassion required to make that last scene believable. He raised his voice, swung his arms around, and looked appropriately distressed, but the end of the play would have suffered greatly if Syglowski had not been talented enough to make Nora’s final resolution believable.

Reviving a classic always carries the risk of too much convention or too much unjustified modernization. This production hits a sweet spot: the language is updated enough to give it immediacy, and its staging is traditional enough for us to perceive that societal pressures, in the 19th century as now, have the potential to ruin people’s lives. We may ultimately support or condemn Nora’s final decision, but we can’t help but empathize as we watch the small figures onstage strive to take control of their own destiny.

Huntington Theatre Company’s production of A Doll’s House is playing now through February 5th at the BU Theatre on Huntington Avenue.