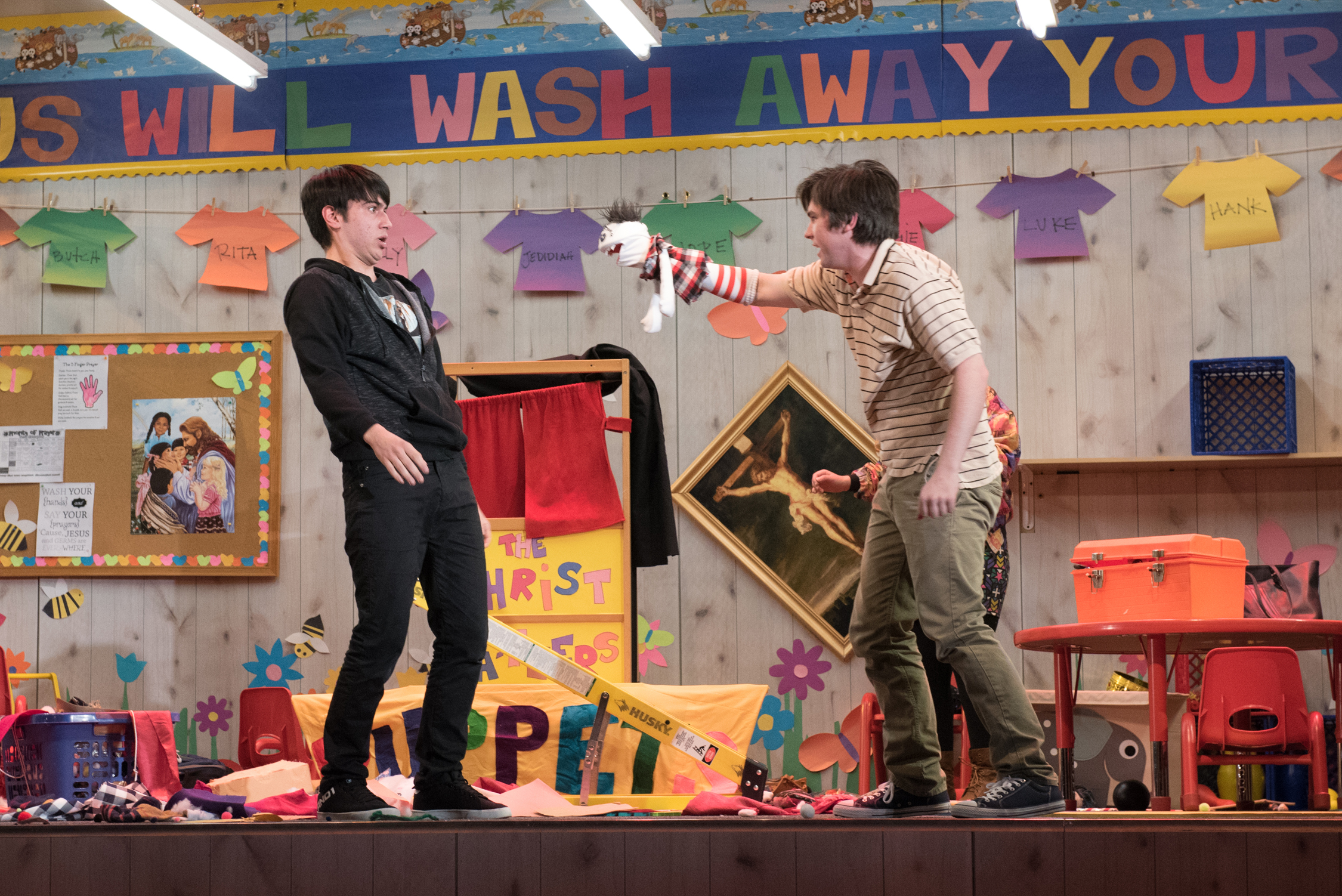 SpeakEasy greeted 2017 by bringing the hot Broadway hit Hand to God to the BCA. Robert Haskin’s play about a young Christian boy and his possessed, twisted sock puppet buddy Tyrone is amusing, dark, and staged to great effect by director David R. Gammons.

Jason (Eliott Purcell), wants to please his harried and bereaved mother, Margery (Marianna Bassham) by performing in her puppet ministry’s Sunday service play. The only problem is that his puppet, Tyrone, has taken on a life of his own. Claiming to be the devil, Tyrone is potty-mouthed and violent, and he’s particularly good at embarrassing Jason in front of his crush Jessica (Josephine Elwood), sassing pastor Greg (Lewis D. Wheeler), and assaulting brash bad boy Timothy (Dario Ladani Sanchez). Chaos ensues as these tightly repressed congregants act on their hidden desires, swelling Tyrone’s dark influence.

SpeakEasy’s production uses rich sound, versatile lights, and nifty curtains to capture the collapse of a Texan church basement into Hell (sound design by Andrew Duncan Will; lighting design by Jeff Adelberg). Much as in his production of Necessary Monsters, Gammons electrifies the production with effective strobe lights and ominous, distorting music. Cristina Todesco’s set captured five different locations with these elements, along with some discreetly wheeled furniture. Jonathan Little’s puppet design charts Tyrone’s swift evolution throughout the play, and Purcell’s deft manipulation of Satan incarnate shone under the puppetry direction of Roxanna Myhrum.

Purcell gets top marks for his puppetry, physical acrobatics, and his clear verbal and emotional demarcation between Jason and Tyrone. Elwood, though given disappointingly few lines, embodied a real and compassionate character, and contributed her share of hysterical puppet antics. Dario Ladani Sanchez as Tim is all id, reckless, rude, and oversexed, and his interactions with Bassham provide the hilarious high points of the play. Wheeler brings softer humor and compassion to the story, as pastor Greg tries his darndest to defend his flock from what he thinks is the grip of Lucifer.

The show is full of antics, and I found the excess of fake blood and physical violence in the last scenes dull rather than shocking, fruitlessly extending the end of the play. By contrast, I was not bored by the rollicking sexual encounters between various characters. The sex scenes were hilarious and perfectly over the top; they were strangely poignant too, in their fervor, urgency, and crazy sense of release.

The audience was an entertainment on its own. During one of the sex scenes, which was getting big nervous laughs from the audience, one gentleman near the front row audibly cried, “Oh my God!” As far as I could see, however, no one was prudish enough to walk out.

Come and see Hand to God for the shenanigans, but stay for the pointed questions underlying the religious and demonic actions of the play: Is there a wrong way to grieve? How far can good intentions excuse you? Is it better to stifle or act on your impulses?

SpeakEasy’s production of Hand to God is playing now through February 4th, 2017, at the Calderwood Pavilion at the Boston Center for the Arts.