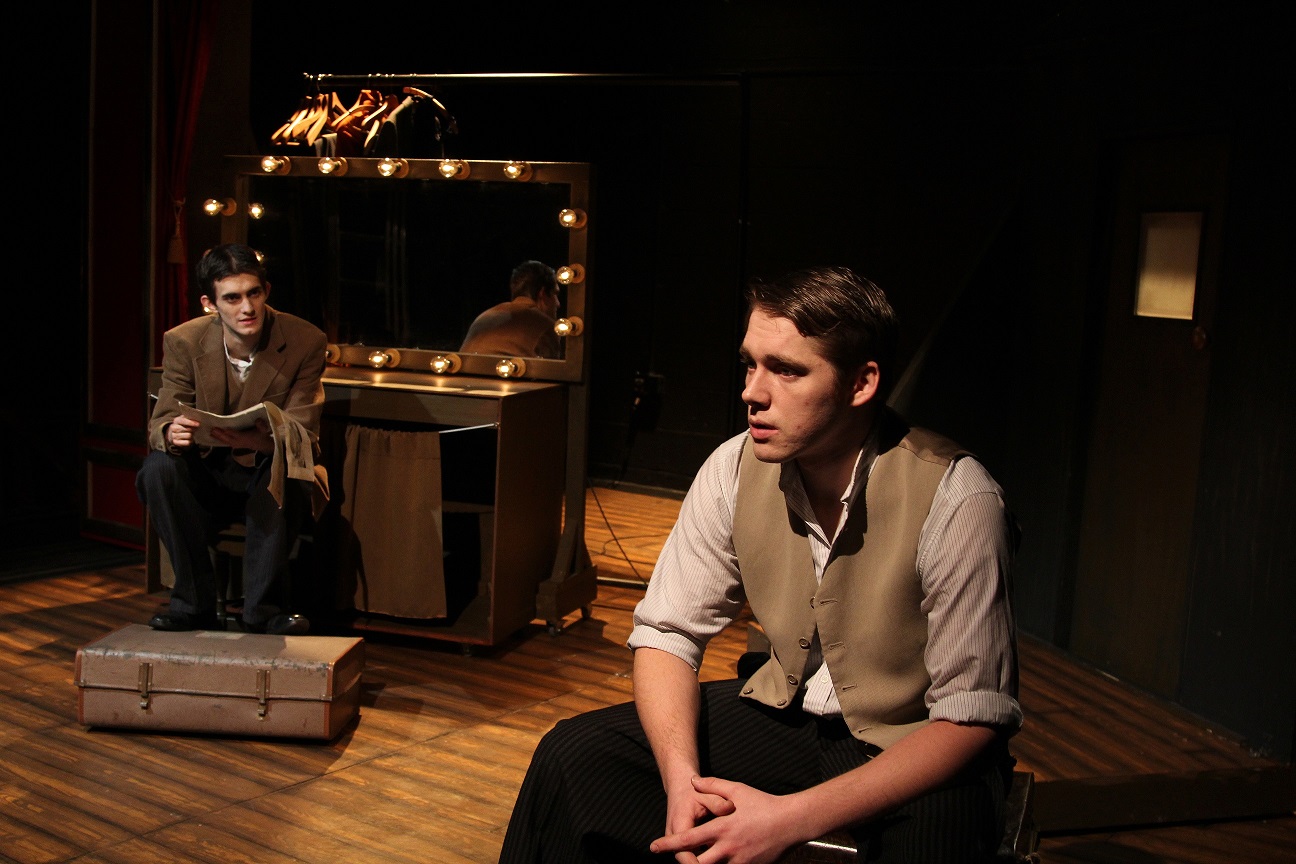 The Doppel Gang at The Tristan Bates Theatre

It must be difficult basing a play around a group as well-known and held in such high esteem as the Marx Brothers while still retaining the sense of individual character that a standalone play offers. Such a concept can be an opportunity to investigate and explore the wider, metaphysical nature of its subject matter in detail—in this case, the ironic wit of the masters of vaudeville. Just Some Theatre’s The Doppel Gang attempts to do just this, following the story of a struggling theatre in the Blitz-torn West End as they search for a show that will save them. It juxtaposes fast-talking American comedy with its more received and wry British cousin, the result being a play of humour, drama and sombreness that hits most, but not all, the marks.

Set within the back and on-stage sections of a struggling theatre, owned by the penny-pinching former thespian, Lombard (Jake Urry), the plot begins with Cyril (Jordan Moore), Tommy (Peter Stone) and Rachel (Rachel Hartley) on the cusp of leaving the theatre for good following a series of unfunny and, more importantly, unprofitable shows. With the frequent sirens’ warning of yet another air raid, the group retreats into a shelter, only to find a collection of previously unpublished Marx Brothers material. With this new content, they plan one final show that should leave them with enough cash for the actors to leave and for Lombard to keep his theatre.

The plot is straightforward at its root, telling a Producers-esque tale of one big show to save the day. Framed by, but never directly addressing, the Second World War, the play keeps the spectre of conflict above the action on stage, adding a sense of perspective to the general soap-opera troubles of the four actors. Indeed, the first act seeks to introduce the characters in more detail, as well as their reasons for wanting to leave the theatre in the first place. However, despite the best efforts of the cast, there is little real character development on offer and the audience is not given any real reason to care for the leads or their troubles. Though it tries to bestow British humour on the characters, their jokes are not solid enough to properly contrast with the later offerings of their American counterparts, lessening the impact of the overall commentary. The main source of enjoyment, as you might expect, stems from the second act, in which the actors put on their best Marx Brothers’ impersonations in an original work. These scenes are acted and directed well, making use of the small stage available and offering the vast majority of laughs the play has to offer; however, it is a shame that the lack of oomph behind any of the characters makes it difficult to connect with the back-stage action that permeates these scenes. Instead, they feel almost superfluous to the otherwise more entertaining action on stage.

In summary, The Doppel Gang is an enjoyable enough play with some entertaining bits stemming from its main subject matter. Though one can see the aims of the play in discussing the nature of comedy while contrasting that with the dark backdrop of war, the lack of character development and punch in the non-Marx content make the Marx Brothers segments the real draw and appeal of the show. A treat for fans of the famous vaudeville act, but perhaps not as engaging for anyone seeking more.