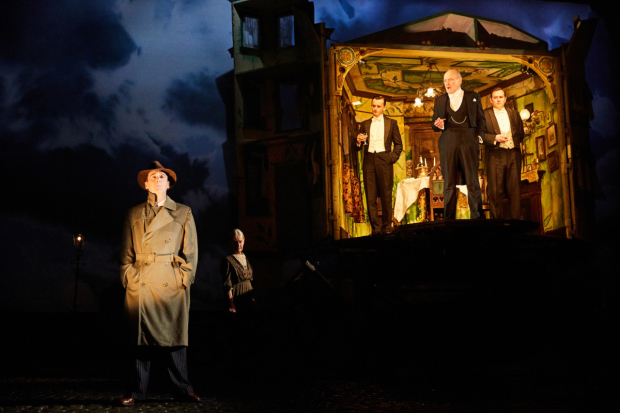 An Inspector Calls at the Playhouse Theatre

There will be few unfamiliar with J.B. Priestley’s most famous piece, An Inspector Calls, and in this latest version director Stephen Daldry extracts the richness of the text to produce a gripping and intense romp and, while it has its ostentatious moments, is a respectfully solid revival of a play that continues to entertain seventy years after its inception.

The plot of this classic consists in a mysterious inspector visiting the household of a wealthy family to question them about their apparent involvement in a young woman’s suicide. With some not so subtle underlying messages about class and the failure of the welfare state, as the story unravels, the family become less self-assured and the repercussions of their privileged lifestyle grow more and more evident. Despite the entirety of the play being set in the dining room of the Birling household, Daldry choses to only use a third of the stage for this and instead fills the rest with an eerily lit street scene. Designed wonderfully by Ian McNeil, the set provides a more stylistic setting for the play, instantly creating an unnerving undertone and allowing for balance of power changes as the inspector, who never himself enters the dining room set, intermittently moves the action ‘down to his level’. The opening scene, pre inspector arrival, is only partially visible to the audience and feels more like a radio play (someone actually does turn on a radio at the start), which causes the audience to focus more on the surrounding action than the dialogue designed only to place the story.

Unlike the other lead characters that are played pretty close to the original material, Liam Brennan is much more contemporary in his take on Inspector Goole. Playing him very matter-of-fact and upfront rather than particularly ghostly as well as adopting a Glaswegian accent, his characterisation would not feel out of place in a modern-day telling of the piece. This directorial decision yields dividends by the contrast between him and the other characters and gives Brennan the opportunity to really play on some of Prestley’s more prolific and meaningful lines. Incredibly watchable, he invokes a lot of drama as well as delivering a number of humorous lines.

The cast all understand their characters incredibly well and individually give unique characterisations while also occasionally mirroring each other in their dismissal of any wrongdoing. Carmela Corbett in particular as Sheila Birling artfully alters her emotion from arrogance and joy to guilt and despair as her character moves along her trajectory. The development in Sheila’s self-awareness throughout the play is counterpoised by that of her mother, played bullishly by Barbara Marten. Marten doesn’t let anything up as she portrays the middle-aged woman of leisure as uptight and unforgivingly proud, and becomes quite difficult to watch when refusing to take responsibility for her actions.

My main issues with this accomplished production are when it deviates from the source material and attempts to become more symbolic in its telling. The play begins with three children exploring the stage and eventually lifting the curtain to reveal the action, which admittedly is quite a nice touch, but there are other sections later on, such as a group of adults appearing on stage and watching the action or the collapse of the dining room that are simply unnecessary and, rather than providing comment on the action, end up emptily distracting us from it. There are also some sections that feel a little too preachy (admittedly this is to be expected in a Priestley play) that could have benefitted from more subtlety, most notably Goole’s final speech which is delivered centre stage with a knowing nod to the audience.

You get what you pay for with An Inspector Calls and this take on the timeless piece is about as good as you are going to get. Priestley’s classic is in safe hands with Daldry at the helm and, baring a couple of unnecessary touches, this is a well-performed production that does justice to the thriller.