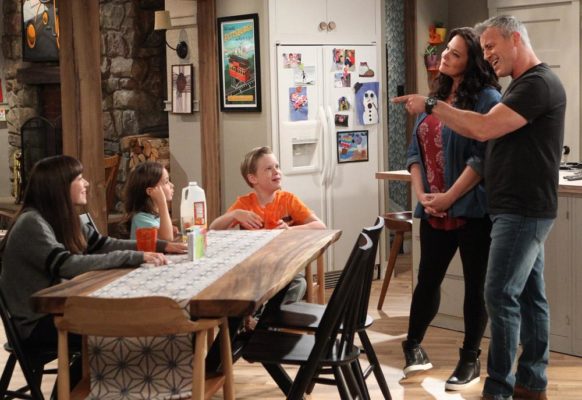 Pilot Watch: Man with a Plan

What the hell is happening on CBS? I mean it. I know they’re considered the grandma network, known mostly for terrible 3-camera sitcoms, procedural crime dramas, and reality TV, but the crushing mediocrity of their new fall comedies is actually mind-boggling.

It seems as though CBS revamps their comedy brand every year and whatever one show survives that season becomes a time capsule for that approach. By the time it finally died, How I Met Your Mother‘s sweet but hip tone was so out of place on CBS that it was easy to forget that’s where it aired. Nowadays, the network’s lineup is the most inconsistent anywhere on TV. They’re like the Saved by the Bell clique- people who would not be caught dead together if they weren’t forced to hang out. There’s the crass, bitchy hipster Two Broke Girls and sweet nerd Big Bang Theory, quiet oddball with dark issues Mom and lazy tag-along The Odd Couple, aka the kid who nobody actually likes but they put up with him because his dad was kind of a big deal back in the day.

And then there’s the new guys- a pair of oldschool macho bozos who won’t shut up about how hard it is to be an oldschool macho bozo in 2016. Man with a Plan is basically just Kevin Can Wait but… no, it’s pretty much exactly Kevin Can Wait with a more handsome lead (Matt LeBlanc, the 2nd piece of CBS’s apparent quest to fill their lineup with Friends-led derivative sitcoms). Instead of a cop, our “hero” Adam is a contractor (#manstuff). Adam’s kids are a little younger than Kevin’s and the show is more focused on avoiding parenting than on avoiding doing household chores (why can’t their wives just leave them be?! Women, am I right?). Adam’s wife goes back to work and Adam has to parent his kids for apparently the first time in 13 years. The show seems to suggest that having a wife who stays at home with the kids means you can completely shirk your duties as a father. Adam seems to barely know his kids’ names. Parenting is treated as a girly task that a “real man” shouldn’t have to do and, when he finally just sucks it up and does it, Adam “fixes” his kids in a single afternoon because he’s so much more competent than his wife. It’s as offensive as it is just plain not funny.

I don’t care what their target demographic likes or what their chosen programming strategy of the year is, CBS is doing this wrong. It’s just wrong. Network executives are the curators of free television. It’s their responsibility to put shows worth watching on TV. If they can’t come up with something that’s actually good, they should at least try to do no harm. Shows like Man with a Plan and Kevin Can Wait are toxic, backwards and literally harmful and they don’t fit with the rest of the mishmash lineup so there’s just no reason these have to be here. The last thing our overly aggressive, gender role-obsessed culture needs is more shows about how men are having their manhood challenged by being asked to contribute positively to their family’s lives. There is no excuse for putting this shit out into the world and proclaiming such an idiot an “everyman”. That is not every man, that is a crappy man and his show isn’t funny.