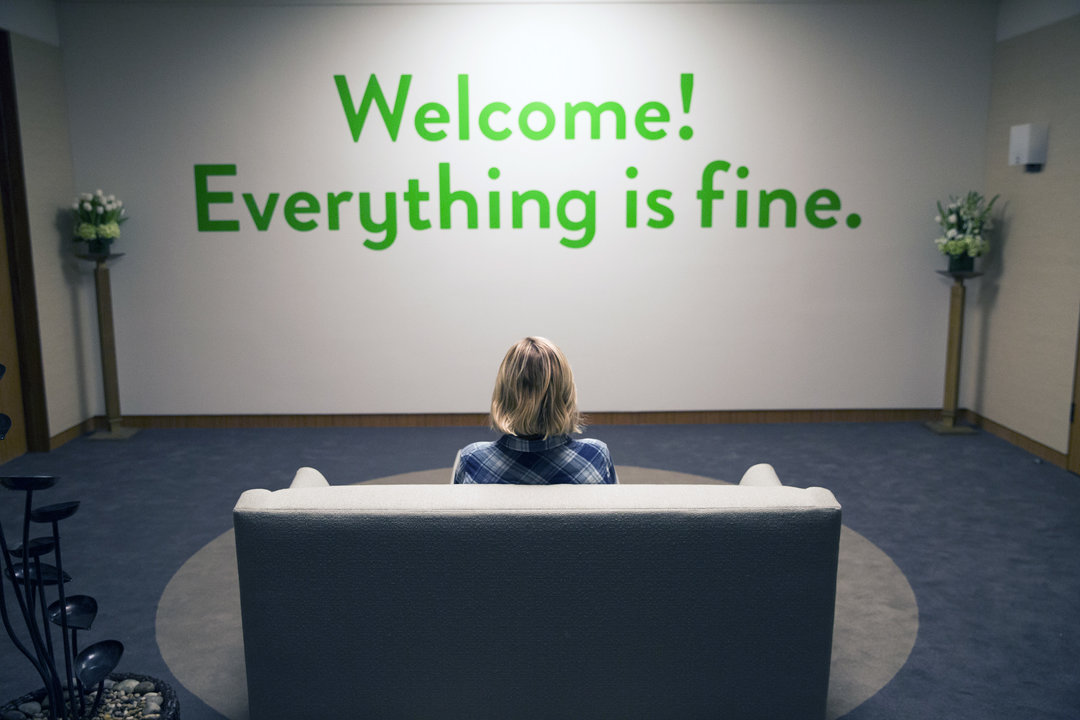 The Good Place is an apt name for NBC’s new sitcom. The Great Place would a little too enthusiastic, but it’s certainly better than The So-So place. The Good Place has a unique, interesting premise, a delightful cast, and some hilarious one-liners.

The titular Good Place is the afterlife. In this show’s lore, every deed a person does in their life is rated by how much good or bad it puts into the universe, and when a person dies, their deeds are tallied. The cream of the crop gets to go to the Good Place, a paradise, whose inhabitants are put into neighborhoods perfectly tailored for their happiness. It has everything anyone could want – including each inhabitant’s soulmate. It’s highly selective – not even Florence Nightingale made the cut.

One of the newest residents of the Good Place is Eleanor Shellstrop (Kristen Bell). Except she’s there by mistake. With the help of her soulmate Chidi (William Jackson Harper), who happens to be a former ethics professor, Eleanor has to learn how to be a good person, or else be damned for all eternity. It’s a unique concept, and the show takes full advantage of the fantastical setting.

The show has a lot of potential. Its take on the afterlife raises a lot of interesting points, or things to think about. In Eleanor’s orientation, Michael (the architect of Eleanor’s neighborhood) says all religions got at least 5% of the afterlife right. While this was a nice way to side-step potentially alienating large portions of the show’s audience, I wonder if this is something that’s going to be explored more. Given that this is an NBC show, I have a feeling that line was a way of saying, ‘everyone’s a little right, so let’s never bring up religion again’, but it would be cool to explore more.

As would the concept of soulmates. Everyone in the Good Places gets matched up with their soulmate. Does that mean their soulmate had to die around the same time as them, or is one half stuck in a kind of limbo until they’re both dead? And what if someone’s soulmate isn’t in the Good Place, but the other place? Given the ridiculously selective entrance standards, surely that’s not impossible. Unless extraordinary people can only be soulmates with other extraordinary people, and average to bad people can only be matched with people on their level, assuming they get to have soulmates. Normally I wouldn’t try to put this much critical thinking into a sitcom, but I’m kind of hoping this is something they touch on. After all, Eleanor made it to the Good Place by mistake, and was matched with a soulmate. Is Chidi her soulmate, and maybe she was admitted so Chidi wouldn’t have to spend the afterlife alone? Or are they not soulmates, and her being matched with Chidi also a mistake?

Another point that was raised is the afterlife system sucks. Only the best of the best make it to the Good Place, and everyone else is eternally damned. Eleanor argues there should be an average afterlife for average people. It’s probably a good thing there isn’t, for the purposes of the show, because Eleanor is awful. If there was an Average Place, I’d probably be rooting for her to go there. She’s not so awful that you want her to go to the Bad Place, but she’s consistently selfish and compulsively snarky. For now, I mostly want her to stay in the Good Place because the alternative is too terrible. And that’s fine for now, because she’s obviously supposed to be awful. But it’s not great for long-term investment in Eleanor’s storyline. She’s trying to learn to be a better person, but it’s slow going, and her motives to be more selfless are clearly selfish, which raises a lot of philosophical debates.

Casting Bell was a smart choice, because she’s just so likeable that, even though Eleanor is terrible, you still kind of like her. Or at the very least, you don’t hate her. The rest of the cast is also fantastic. Ted Danson plays Michael, the architect of the neighborhood. It’s fun to watch him slowly unravel as his perfect design turns out to be not so perfect.  Relative newcomer William Jackson Harper is perfect as the anxious academic Chidi, who is more than a match for his supposed soul mate Eleanor. The other stand-out is Jameela Jamil, who plays perfect (and slightly condescending) Tahani Al-Jamil. She’s a kind of character who we’re conditioned to dislike – she’s a rich, beautiful woman who (as far as we know) has had her glamorous existence handed to her on a silver platter. But Jamil injects enough warmth and vulnerability into her performance that you can’t help but like her.

The Good Place is funny, with a plenty of good one-liners, and a few great running gags. The best of these is probably when one of the characters reveals whether or not some famous person made it to the Good Place. (I especially appreciated when we found out Columbus was in the Bad Place because of “all the raping, slave trade, and genocide”. I’m a fan of people calling out Columbus, since America still, inexplicably observes Columbus Day. I wasn’t expecting an American network sitcom to call him out, but I enjoyed it very much. I hope they continue calling out problematic historical figures). The Good Place is an interesting new offering from NBC, and I’m curious to see where they take it next.