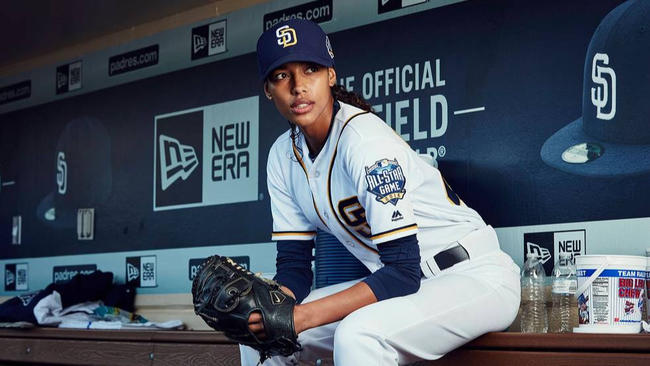 I’m all in on FOX’s new sports drama about the first woman to play Major League Baseball. There’s something about the recipe of non-procedural, non-genre, non-soap dramas that network TV hasn’t gotten right in years outside of the work of Jason Katims. Creator Dan Fogelman has offered up two possible solutions this fall and, though NBC’s This Is Us is brutal, Pitch might be exactly what network TV needs.

The premiere episode follows screwball pitcher Ginny Baker (Kylie Bunbury) over a five-day period bookended by her first and second major league starts with the San Diego Padres, filling in her story with flashbacks to key moments from her childhood training with her dad. There’s a lot of noise around Ginny’s story- the Padres manager (Dan Lauria), general manager (Mark Consuelos) and owner (Bob Balaban), Ginny’s manager (Ali Larter) and social media manager (Tim Jo) are all prominent characters- but it will take time for any of those people to develop into anyone interesting. For now, the focus is on Ginny, how she got here, and how she’ll find her place in the clubhouse.

The how-she-got-here stuff is so far working fairly well. The kid casting in the flashbacks is perfect and the show has already started to use the backstory to lay a lot of psychological groundwork that will pay major story dividends moving forward. A twist I’ll talk about in a moment might limit the potential of the flashbacks in future episodes but they’re the emotional high-points of the pilot, especially a particularly formative scene involving her brother’s one attempt to participate in her training.

As for the 2016 clubhouse storytelling, I think this is where the show will ultimately find its best rhythms. Pitch uses real broadcasters  (FOX Sports, of course; gots to have that synergy) but fake players to fill out its alternate-reality MLB, highlighted by a couple of already incredibly well-constructed teammates who might point to the show’s long-term potential as an ensemble character piece once the novelty of its premises starts to wear off. Mark-Paul Gosselaar is already stealing the show as all-star catcher Mike Lawson, the writers’ funniest line delivery system and the most interestingly opaque man on the team. The competing starter whose injury made space for Ginny on the team (Ryan Dorsey) is too blatantly antagonistic at this point and her friend from the minor leagues Blip (Mo McCrae), though a potential future fan favourite, is purely an ally so Lawson’s more complicated headspace about Ginny’s role in his career is welcome out-of-the-gate intrigue and a promising example of good old fashioned character writing and performance cooperation.

The episode’s final twist is the last thing the series needs *spoilert alert*, revealing that Ginny’s dad died years ago, the day she won the State Championship and was first scouted by the Padres. Sure, a dead dad makes for one big TV moment (the reveal) and one emotional episode ender (they repeat their catchphrase one last time as she practices alone remembering him demanding pitch after pitch) but the dead dad who still shows up gimmick topped out with Six Feet Under and I already feel robbed of what would have been the show’s richest mining ground for serious drama that doesn’t come from external plot devices (I’m looking at you, evil competing pitcher). Ginny’s father’s role as both her greatest inspiration and her ultimate tormenter is complex and interesting and now it’s confined to flashbacks where his internal struggle with his daughter eclipsing his own pro baseball career will never be fulfilled.

That dubious twist aside, the pilot episode of Pitch sets the show off on a really good foot. It may never be a prestige drama- it’s too earnest, not quite stylish enough or maybe a bit too stylish- but I’m putting my money right now on it being an underrated network gem that works week-to-week in that reliable network way. It’s not all there in the pilot but it’s not supposed to be; what is there promises to become more and that’s what great serialized TV is all about.