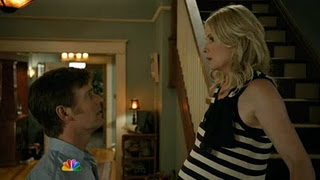 To celebrate Jason Katim’s SPECTACULAR EMMY WIN for the superb writing on Friday Night Lights, I thought I’d check out the season premiere of Parenthood. I really do love the excellent ensemble drama but it gets easily lost in the shuffle of all the new things popping up on network for the start of the new season. But as I dove into the first episode of season 3 I remembered all the reasons why Parenthood is one of the great underrated shows of its generation, no matter how annoying at times.

Peter Krause, perhaps TV’s most reliably grounded leading man, delivers the performance of the episode as Adam deals with the awkward, useless indignity of unemployment and the pride-walloping of settling for a lowpaid, uncreative job in order to support the new baby him and Kristina have on the way.

On the other side of it, however, I’m still struggling with Lauren Graham’s Sarah. She’s all the mess of Lorelai without any of the charm or go-getter problem solving abilities. Perhaps the comparison is unfair but I often wish the original casting of Maura Tierney had worked out so that Sarah would be hitting notably different notes than Lorelai did. As it is, I continually find myself expecting more of Sarah and disappointed when the mildly annoying Graham comes off whiny and immature as Sarah once again spins into neurosis over the littlest of things in the most unhelpful of ways. I get that Parenthood prides itself (rightly so) on the imperfections of its characters but if Sarah could handle herself with half the grace of any of her siblings (yes, including Crosby) I’d be very grateful. That said, she had a point about Amber leaving the party so early- ridiculous. The on-the-nose revelation that Amber is essentially the reincarnation of her mother’s wild youth? Not so organic.

And the quote of the episode? Max declares that he knows there’s drinking at highschool parties because “I watch Friday Night Lights“- ha! Not only does the shoutout to Katims’ recently departed, wholly beloved show highlight the tonal similarities between it and his current project, the meta implications of Max delivering the line in the presence of Alex (aka Michael B Jordan aka Friday Night Lights‘ QB1 Vince Howard- noted participant in many of the aforementioned parties) were just plain fun. Should Max be watching Friday Night Lights at his tender age? Maybe not (the show does, after all, feature quite a few sex scenes involving his own behavioural therapist Minka Kelly), but I appreciate the shoutout. Now, Haddie’s odd and selfish reaction in the scene? Not so fond of that. There is no world in which Alex should have felt obligated to go to that party at all, let alone rescue her in her drunken haze. Poor Alex, I really don’t see why he’s sticking this thing out with a girl as unremarkable as Haddie.

More Thoughts:
– Jabar really is the cutest kid ever.
– Poor Drew, he’s always so under served by the stories week in and week out.
– sibling ping pong is always fun to watch.
– Oh the beautiful relief of Julia mocking her own desire to buy the latte girl’s baby. There was a moment there when I thought that might be a serious story without the necessary self-awareness.
– Adam should dance, always. It is never not funny. In fact, everyone in this family should dance, always.
– I really do adore Julia. And Joel. They are so wonderfully strong and funny and just great. Erika Christensen might be the most engaging actress on the show.