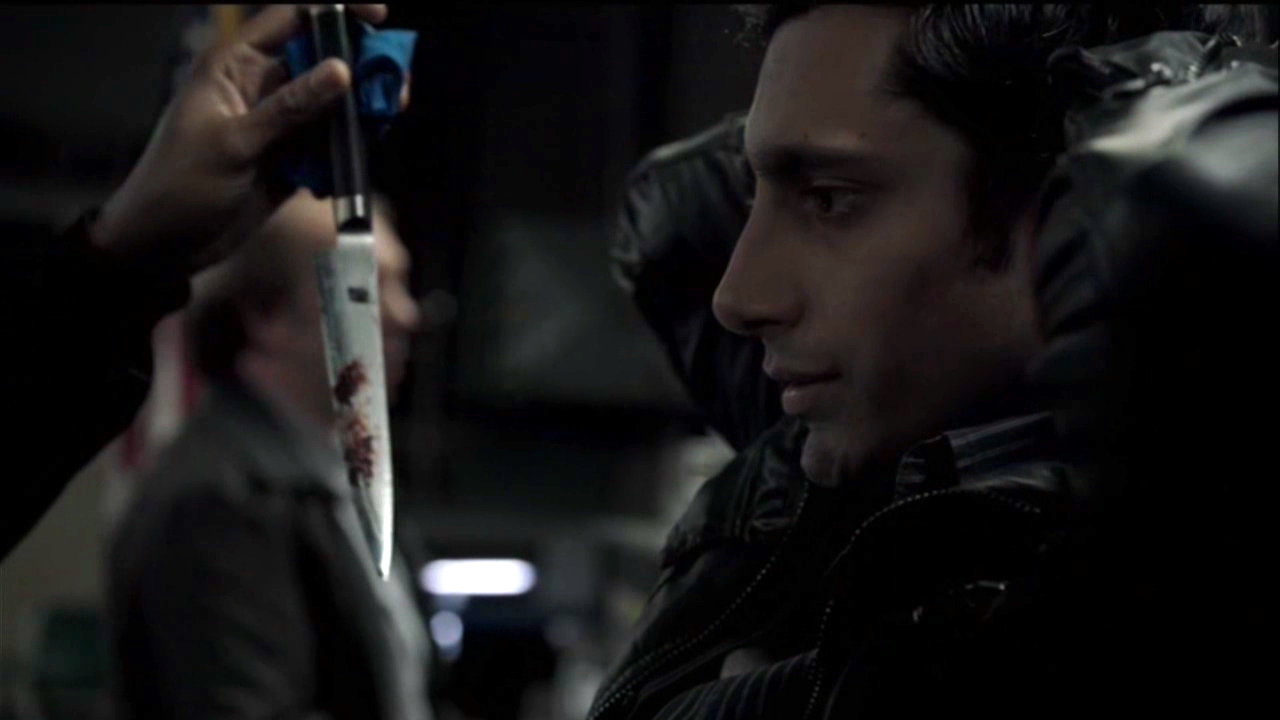 The Night Of: A Foreigner Carrying a Knife in the Pocket of his Jacket

Ed. Note: This article addresses episodes 4-6 of season one of The Night Of

There is a book, by Amitava Kumar, called “A Foreigner Carrying in the Crook of His Arm a Tiny Bomb.” In it, he addresses the increased efforts by law enforcement and intelligence agencies to catch terrorists and safeguard the country through a method known now as entrapment. Essentially, it’s a bait-and-hook scenario. The government organizations create bait (a man pretends to have connections to terrorist groups and tries to get others to join him) and waits for someone to swallow it (a person or a group of persons is drawn to the bait and begins fomenting a plot over the course of weeks to years), before reeling them in and sentencing them to life sentences, Guantanamo Bay or worse. The fundamental flaw with entrapment is that you don’t know who you’ll attract with the bait. It could be a terrorist sympathizer with a criminal record or it could be an angry teenager who just wants to lash out, or a depressed person looking for purpose in their lives, or someone who talks a lot without actually doing anything. But, because in the wake of 9/11 it is a legal fact that a young brown-skinned man is considered more likely to be a threat than anyone else, entrapment has been the norm for well over a decade now, despite the fact that there would have been no terrorist agenda had the government not made one up.

The Night Of is not about entrapment or terrorism. It is interesting, however, to look at the world from Kumar’s treatise on the post-9/11 world. John Stone puts it best in the fifth episode, “The Season of the Witch,” talking to Trevor in the laundromat – “After 9/11, two things happened. You started calling guys Abdul Fazul, and Homeland Security started putting up cameras everywhere.” Granted, there’s a lot of context to this quote – John is leaning on Trevor to give him the truth, implying that there is footage of him and his companion encountering Nasir and Andrea outside the apartment on 87th street – but on its own, the words are a compelling statement to the underlying thesis of the show.

Everyone who is fighting the case – the lawyers, the DA, the officers, the judge and the jury – is trying hard to ignore the question of Nasir’s faith. The fact that he is a Muslim comes up and is difficult for them to embrace head on. The prosecutor, Helen Weiss, includes it as both a pro and a con on her list. There are references made to Abu Ghraib, Guantanamo Bay and the like, scenarios where Muslims and suspected terrorists and brown people have been seen in the media, sometimes in jest, sometimes because the situation Nasir is in is portrayed as being unique, so we need to find similar things to hold up against it.

More than anything else, the situating of the story in New York, in Manhattan, is vastly symbolic and meaningful for the characters. Nasir’s life after 9/11 became vastly more difficult. The attack on the World Trade Center hit literally close to home, and as he said in “Samson and Delilah,” it was like a war. From these times do we see the prosecution arming themselves, with the story of Naz pushing students down stairs and being transferred to a different school because of his unabated violent behavior. We see Freddy’s interest in Naz grow with all the rage and secrets within his pupil. Chandra and John are up against some pretty compelling evidence to suggest that their golden boy is a lot more tarnished than they knew. It’s hard to be a good Muslim in New York City when half of the population thinks you look like a terrorist.

So with all this background, all this violence and anger and ill-will, we’ve come to the start of the trial. Nasir has to spend his days in court, listening to the events of that ill-fated night picked apart, scrutinized like so many pearls in a tray. Looking at it from the other side of the murder, the events preceding it don’t look so ominous, so harrowing. It just looks like a night out with a few wrong turns (turns which of course, lead to murder). But the prosecution’s burden is to make Naz look like the criminal he is accused of being, and that means highlighting his decision not to kick Andrea out of the cab, the extreme state of inebriation he was discovered in, the names of the drugs coursing through his veins. Their agenda is clear – to make a good-looking guy look like a murdering psychopath. Such is the play of justice: “They get to tell their story, then we get to tell our own.”

It’s difficult, because at the outset, we want to believe that Nasir is fighting for the truth. Chandra counsels him not to appeal, and so he claims his innocence at the hearing, pushing for his date in court. At the time, he was still terrified of Rikers, in shock at the whole situation. But by the time the trial starts, Nasir’s head is shaven. He’s getting tattooed. His attitude has become increasingly belligerent and sullen. To wit, he’s read The Art of War and he’s doing what he thinks he must do to survive by its rules, the rules of the prison. The terrible irony is that we, the audience, can see that these moves on his part will not help him to win his trial. He’s no terrorist, no hardened convict as of yet, but anyone can see that Naz has changed horrifically since they found that knife in his jacket.

Actually, Kumar’s book’s title is a throwback to French story, “A Foreigner Carrying in the Crook of His Arm a Tiny Book,” by Edmund Jabès. But the point isn’t about what people carry in their arms, it’s about the perceptions they hold in their minds. In our Homeland-Security-aware society, we are constantly being invigilated and told to be vigilant. And we are vigilant for what we deem to be the direst threats, aka, terrorists. But you cannot tell someone is a terrorist just by looking at them, talking to them, or becoming friends with them. You have to guess, and your guesses are guided by (surprise surprise) your prejudices, your preconceived notions. Which are in turn informed by what you hear on the news and see in your daily life. So, if you are told that Muslims are bad, and you’ve never met a Muslim, or interacted with Muslims in a significant manner, you’ll be inclined to suspect them of being, if not terrorists, then at least bad. And that’s the fear we all hold for Naz, the reason his faith is a pro and a con. No one wants to be seen as being prejudiced, as blaming the murder on him because a Muslim. But the public eye sees it as that, the jury sees it as that, and it’s damned hard in a city that’s lost so much to terrorism to not see him as anything but another bad Muslim man. Such is the true nature of entrapment, not that it traps the intended prey, but that we are all trapped by it, judge, jury and public, snared in our search for the truth.