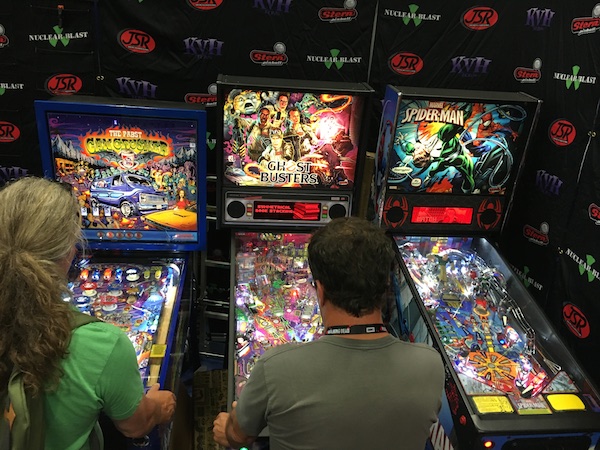 SDCC ’16: The Latest from Stern Pinball

Rachael and I took a break from the press room madness and ventured onto the famous Convention Centre floor to get the full SDCC experience, including stopping by the Stern Pinball booth to talk with company rep Jody Dankberg about the latest machines created by THE pinball company.

Stern’s new Spiderman machine was the highlight of the new crop. Loaded with franchise catchphrases and cool interactive elements like the Sandman, the machine vibrates and creates a cool immersive experience.

The PBR-inspired machine is sure to be an American bar favourite, not only for its frat boy appeal but because it’s both the simplest and most user-friendly of the group so easy to enjoy alongside an actual Pabst or six.

The new Ghostbusters machine (just in time for the new movie but modelled after the old one) is also awesome, full of interactive elements and classic features (that theme song!). It’s crazy hard, though, so definitely not for beginners.

Our full interview with Jody is below along with some exclusive footage of Rachael playing a couple of the new machines.