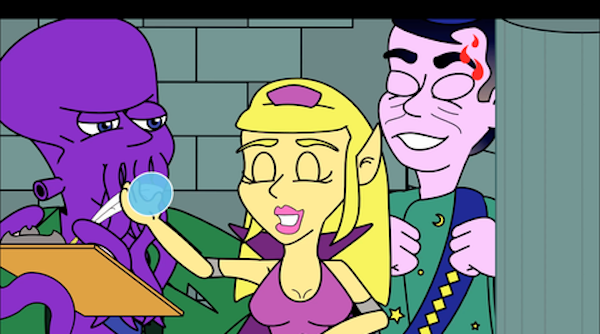 Episode 1 of Fantasy Hospital began with someone nefarious finding a spell book on summoning Orks. That can’t be good. And it’s not. The Orks attack the Windhams’ home during their big event to welcome the High Wizard. Misty Windham didn’t show up to her family’s prestigious party because she’s a nurse at the Fantasy Hospital and had a surgery that day. She may not be the smartest elf, but she’s got heart.

At the same time, the staff at the Fantasy Hospital was celebrating Dr. Bonaventure’s 100th surgery, which Chief Kuckles is quick to point out doesn’t necessarily mean “successful” surgeries. Dr. Benaventure also makes sure everyone knows that he’s not an evil wizard anymore, just a jerk.

Everyone rushes to the hospital and the staff saves everyone. Well, everyone magical at least. The High Wizard overhears some staff talking about mortals, and he decides to capitalize on it. He’s up for reelection and things do not look good in the polls. He has to beat Donald Trunk!

So the High Wizard says that the Fantasy Hospital should be helping mortals too. Everyone immediately sees this as a political tactic. He’s trying to win over Trunk’s environmentalist base. He’s being pressured by special interest groups like Big Magic. How will they even pay for it? The Fantasy Hospital doesn’t have enough resources as it is. Like many politicians, the High Wizard doesn’t have the answer. And neither does his press secrefairy.

Either way, the magical creatures need to learn more about mortals. So they start watching Max Tuduski. Max is in med school to be a doctor just like his dad. But he’s terrible at it and has no interest. He finally summons up the courage to quit med school, but he finds out that he can’t live in student housing anymore so he has to stay with his sister Maddie.

It’s clear where this is going: the staff needs the aimless Max’s help to find out about mortal medicine. Max needs help becoming a mature adult. Can they help each other out?

Check out the Fantasy Hospital website for all the latest episodes.