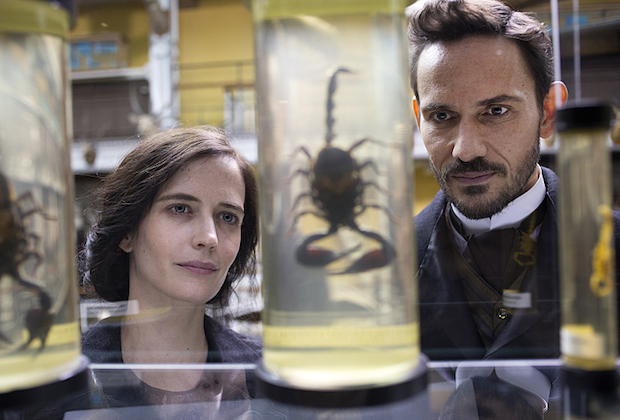 Penny Dreadful is back, and it was worth the wait. The first two episodes of Season 3 expanded the show’s universe with new locations, and teased of new horrors to be explored. (Spoilers ahead).

Ethan’s storyline is probably the best example of expanding the show’s world. He is being escorted by Inspector Rusk through the New Mexico Territory to await justice. The sweeping shot of the desert-scape is a stark visual indicator of how much bigger the show is this season. The New Mexico Territory in the late 1800s (empty, vast) is pretty much the opposite of Victorian London. But it’s no less dangerous.

After confessing to the Mariner’s Inn Massacre last season, Ethan is being extradited to the United States. Instead of facing the law, he’s kidnapped by men sent by his father to take him home. There’s been two seasons of hinting about Ethan’s troubled past, and what a monster his father is, so it’ll be interesting to finally meet him. This storyline drags a little: first a group of hired guns kill the law enforcement officers tasked with taking Ethan in. Then the next episode, Ethan murders the hired guns. It felt like stalling until there’s enough time to properly delve into Ethan’s relationship with his father, Hecate, or Kaetenay.

Kaetenay is a new Native American character, is played fantastically by Wes Studi*. Kaetenay is an enigmatic character, who has recruited Sir Malcolm to help him find Ethan. Kaetenay refers to Ethan as “his son” (not biological), but when Ethan saw him in a dream sequence, he didn’t have any warm and fuzzy feelings towards Kaetenay. (This is pure speculation, but does anyone else think Kaetenay has something to do with Ethan’s monthly problem? His canine curse? The fact that he’s a werewolf). While what exactly Kaetenay wants with Ethan is unclear, watching him face off with Sir Malcolm (Timothy Dalton) is highly satisfying. For two seasons, we’ve watched Malcolm try and carefully control everything and everyone around him. Finally, he’s met his match in a man who will not be charmed or intimidated into giving out information. It’s fun to watch Sir Malcolm stew, if just for a little bit.

Malcolm is not the only one thrown off balance by the introduction of a new character. Frankenstein’s world is turned inside out when an old friend, one Dr. Jekyll arrives. It’s unclear how Hyde-y Jekyll is at this point. He does talk a lot about people’s dual nature (which appears to be a main theme this season). But it’s hard to tell if that’s just a scientific theory, or if Jekyll speaks from personal experience. Either way, he doesn’t need to bring out his Hyde side to be terrible. Frankenstein called Jekyll in because he claims to feel responsible for bringing Lily into the world. He needs help stopping Lily, who if you’ll recall, last season was talking about world domination.

It would be a nice change for Frankenstein to accept responsibility for playing God, and to take ownership for the sins of his “children”. Except, it becomes clear that guilt isn’t exactly what’s troubling him. Frankenstein certainly doesn’t care about the whereabouts of his original creation, John Clare. (We briefly saw John as he was peacing out from an Arctic adventure gone awry in favor of trying to trace his pre-resurrection roots). No, Frankenstein only has thoughts of Lily and destroying her. Until Jekyll offers an alternative. He can help Frankenstein “tame” and “domesticate” Lily. Which just….ew and ew.

An immortal hell-bent on making man-kind suffer obviously needs to be stopped. But this doesn’t seem to be Frankenstein’s main goal. Lily’s fate in Frankenstein’s eyes has less to do with whether or not he can stop her from causing destruction, and more to do with if he can get her to love him via messing with her brain. We’ll get to Lily vs the world in a minute, but in Lily vs Frankenstein, I have no problem if she decimates him. One more point before I move on: in the Season 2 finale, Lucifer needed Vanessa to agree, of her own free will to be with him, or else it didn’t count. If the actual Devil himself needs a woman to consent to a relationship with him, then so should you, Victor. “Be better than Satan” is a pretty low standard, and yet, it’s one Victor fails to meet.

So is Lily more monstrous than her creator? She and Dorian do murder a lot of people in the second episode, but in their defense, the people they murdered were a bunch of rich creeps who had just paid a lot of money to watch a young girl get tortured to death, and seemed like they regularly did this kind of thing so…I kind of support Lily on this one. It seems unlikely Lily’s brand of vigilante justice will remain restricted to sick perverts who would be protected by their social status. Lily herself acknowledges she’s turning into something dark. One can certainly sympathize with her wanting revenge against men who exploit defenseless women. Lily spent her first life as an abused prostitute, and was only given a second life to be handed off as an unwilling bride. It’ll be interesting to watch Lily’s path, and if/when she goes too far.

And finally, it wouldn’t be a Penny Dreadful review if we didn’t talk about Vanessa Ives (Eva Green). Vanessa was left shattered by the events of last season. She lost the man she loved (Ethan) and worse, her God. Season 3 finds her in a deep depression, so she starts seeing Dr. Seward, who is played by Patti LuPone. (Who is now a series regular!) LuPone had a memorable guest spot last season as the Cut-Wife, Vanessa’s mentor in all things witchy. Green and LuPone play off each other beautifully. Dr. Seward is tough, demanding, and hard to read. Vanessa, who usually trusts very few people, allows herself to be vulnerable in front of a stranger .This trust is probably is at least partly due to the fact that Dr. Seward is a descendent of Vanessa’s friend the Cut-Wife. There is something Dr. Seward is hiding. It’s not clear whether or not she believes Vanessa. From the season trailers of Vanessa in a padded cell, it seems like a no. But Dr. Seward seems affected by Vanessa’s stories in a way that suggest there might be something more to her.

Per Dr. Seward’s instructions, Vanessa tries to break her depressive cycle and tries something new: going to the Natural History Museum, where she has a meet-cute with Dr. Sweet over some scorpions. (Meeting a handsome zoologist over taxidermied animals is totally a meet-cute, especially in this universe). Sparks fly. But alas, because this is Penny Dreadful, Dr. Sweet is not all he seems. He is in fact Dracula. Charming scientist by day, murderous stalker by night. It was pretty obvious that there had to be something more to Dr. Sweet, but come on! Vanessa deserved an adorable romance with an enthusiastic zoologist, and we deserved to see it. But, again, because this is Penny Dreadful we can’t have nice things like nerdy love interests. (Or Sembene’s backstory. Who else is still bitter they killed him off before delving into that?).

Dr.Sweet/Dracula promises to be a great villain, and furthers the theme of a man or vampire’s duality. Penny Dreadful made a bold decision in revealing Dr. Sweet’s real identity so early on in the season, but it was probably for the best. Trying to draw out the mystery would slow the pace down too much. There’s a lot happening this season on Penny Dreadful, with the characters scattered to the winds. They each need to resolve their storylines before presumably being brought together again sometime before the finale. Diving right into the action seems to be the show’s strategy this season- and it’s paying off.