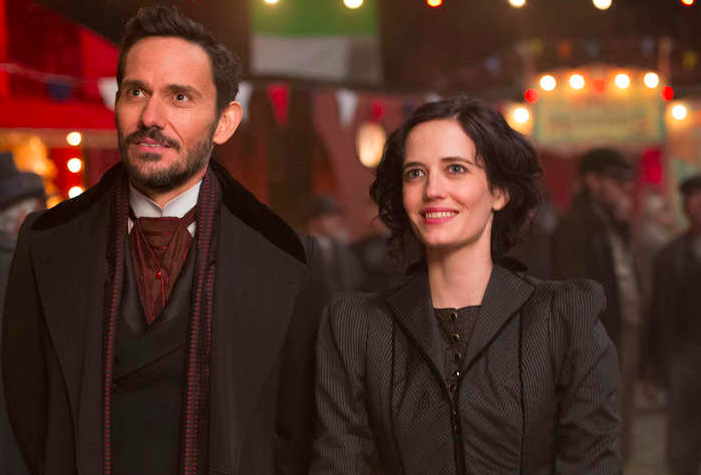 After the dramatic reveal at the end of last week’s “Predators Far and Near”, you could be forgiven for thinking Penny Dreadful might take it easy this week. There were some parts that plodded along, but overall, it was another strong episode, with another shocking ending. (Spoilers ahead)

The slowest part of the episode was any part that took place in America. Ethan and Hecate begin to make their way through the desert to go back to Ethan’s childhood home. Hot on their trail is Inspector Rusk and the US Marshall, as well as Sir Malcolm and Kaetenay. That means after we watch Ethan go somewhere, one of two groups will revisit the same place and speculate on what Ethan did, even though we the audience already know, because we already saw what went down the first time around. Another problem is Hecate and Ethan’s relationship. Kaetenay is concerned Ethan will turn evil, and that Hecate has a hand in this. But this doesn’t match what happens when Hecate and Ethan are on screen. Ethan flat-out told Hecate he hates her, and is visibly horrified by her actions. Sure, Hecate is trying to convince Ethan to embrace his inner-werewolf so they can rule over the darkness together, but Ethan doesn’t seem to be buying what she’s selling. Hecate has proven herself dedicated and crafty, so there is a chance she’ll make some headway, but there isn’t a huge sense of urgency right now.

Lily, Dorian and Justine’s storyline is starting to gain momentum. After Lily and Dorian rescued Justine last week from being murdered for sport, and now she is their first recruit. A recruit for some ambiguous revolution, where they will recruit other battered women to their cause. Lily gets more and more interesting with each passing episode. She seems to genuinely care for Justine, and upset by her plight. And there was a nice moment when she remembered Ethan fondly. But these softer moments are fleeting breaks between her cold anger. Lily is the leader of this little murder trio. Justine is a fanatic, who will follow Lily to the ends of the earth. Dorian’s part is less clear. In the first two seasons, he was a frivolous man, wanting to have fun and be entertained. Sure, Dorian seems to be having a splendid old time murdering unsuspecting abusers, then having a blood-soaked three-way with Lily and Justine. (Side note- there’s no way Dorian cleans his huge townhouse himself. Whatever he’s paying his maid: it’s not nearly enough). He mentioned wanting a revolution, but is he actually committed to this, or is it a passing fancy?

Lily is committed. There was one fantastic scene when Lily and Justine watched a group of suffragettes get beaten and arrested. She explains to Justine that while they and the suffragettes have the same enemies, their goals are different. Suffragettes seek equality, while Lily seeks mastery. It was a scene that is incredibly relevant to the modern day. It was a scene that showed what feminism is (the suffragettes) vs what some people are afraid feminism is (Lily). This scene gave me the sense that even if Dorian is committed to their “revolution” his goals might not match up exactly with Lily’s. Dorian is a rich man who has the world at his beck and call. Sure, he and Lily seem to get along now, but how long is that going to last?

Meanwhile, Vanessa has broken things off with Dr. Sweet, in the interest of protecting him. Casting Christian Camargo as Dr. Sweet/Dracula was a brilliant move. Dr. Sweet is enraging. He is so charming and charismatic, except it’s all an act. And even though I know he’s playing Vanessa, whenever he has a scene where he’s courting her, my thought process usually goes: aww, they’re such a cute coupl- wait, no, no, he’s literally pure evil. Stop being so adorable and charming, damnit. Every single time. And of course, the more perfect Dr. Sweet seems, the more devastated Vanessa will be later when she finds out his true identity. And she has enough problems as it is.

Vanessa did have another stroke of good fortune this week: she managed to convince Dr. Seward that she is telling the truth about demons and witches, which was a relief. A lot of other shows would have a psychiatrist playing along with their patient, and the patient having to convince them the delusions are real. It took one scene in Penny Dreadful for Vanessa to convince Dr. Seward. Eva Green and Patti LuPone have amazing chemistry. LuPone’s Dr. Seward is tough, which is just what Vanessa needs in order to make any progress. It’s great Vanessa doesn’t have to try and convince Dr. Seward any more, and instead has her as an ally, because let’s face it: Vanessa needs all the allies she can get.

Dr. Seward agrees to hypnotize her, so Vanessa can remember her time at the Banning Clinic – the place where she was institutionalized in Season 1 flashbacks. And this is where all my doubts about this season of Penny Dreadful were shattered. When I saw the season trailers, which showed Vanessa in a padded cell, I thought it seemed a little repetitive. Vanessa has made so much progress, and was getting help from Dr. Seward. To have her back in an insane asylum like she was pre-Season 1 felt like a major step backwards. Victorian mental health care wasn’t exactly helpful. (Looking at you, Jekyll and Frankenstein). Vanessa said herself she was tortured at the Banning Clinic. I was dreading Vanessa going back to such an awful place that would probably hurt her more than help her. My other sort-of-issue this season was John Clare. As I was watching John wander around London, trying to retrace his past, I thought that while I liked John, his storyline seemed a little aimless this season, and was disconnected this season.

I was wrong. So, so wrong. Because for the second week in a row, Penny Dreadful has had a dramatic reveal in the last 30 seconds. And while last week, you could kind of tell something was off about Dr. Sweet (he was too perfect), I was completely blindsided by this week’s reveal: John Clare was an orderly at the Banning Clinic when Vanessa was there. Did not see that one coming at all. John is only just getting back his memories of his first life, and Vanessa blocked out her Banning Clinic memories. But John was there, and attended Vanessa. Did Vanessa have something to do with John’s death? The timelines seem about right for that, and Vanessa was suffering from a slight case of demonic possession. Is John going to remember? What does this mean for their friendship? (I have such a soft spot for all the scenes Vanessa and John shared last season). I don’t know, but oh my gosh am I sorry for doubting Penny Dreadful.

Aside from some masterful storytelling, Penny Dreadful is making some truly amazing technical choices. The scene where Vanessa is lost in the mirror maze was a stand-out. The lighting, the disorienting camera work, the way the musical gradually changed from carnival music into something more sinister was so well done. There were other great shots, but that one was exceptional.

Between the strong storytelling and beautiful technical work, Penny Dreadful has been absolutely killing it. While I think some of the America storylines are dragging, the John Clare reveal taught me not to doubt showrunner John Logan and his team. I can’t wait to see how the story unfolds next week.

Other thoughts: One of my favorite moments was when Vanessa tried to convince Dr. Seward to hypnotize her. Dr. Seward thought it might be traumatic, and Vanessa asked if she could be any more traumatized than she already is. Fair point, but I think as the season goes on, we’ll find the answer to that question is yes.