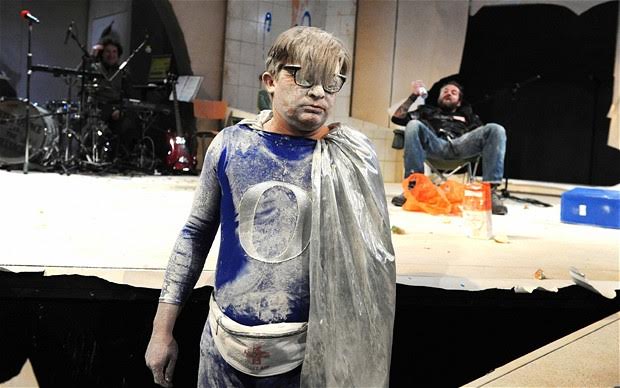 Probably Shakespeare’s most famous comedy, there is undoubtedly going to be added pressure to present something new when performing A Midsummer Night’s Dream, and that is certainly what we get with Filter Theatre’s production at the Lyric Hammersmith. A total farce from start to finish, this zany show is a wonderful comedy fest that successfully juggles traditional and contemporary ideas, and while at times can overstretch a joke or two, is successful in making this play feel fresh, exciting and new.

The show stays reasonably close to the original text, going through the scenes chronologically, though it also happily diverts into modern day language to aid the humour. The fourth wall is repeatedly broken, not least at the start of the show when Ed Gaughan begins a mini stand-up routine, in front of the drapes, talking directly to the audience. Gaughan’s Peter Quince, usually a rather unmemorable character, becomes sort of the presenter/producer of the show, switching between playing himself and Quince sporadically. These random breaks from character may have failed horribly was this any other show, but given the madness A Midsummer Night’s Dream already contains, it feels quite in keeping with the piece.

Sound and music are prominent themes with the ‘acting troupe’ characters doubling up as an in-house band and sound effect crew. When the setting first moves to the enchanted forest, interesting instrumentation is used to create the scene, with live mixing on stage deliberately distracting from one of the less entertaining scenes in the play. The songs that are littered throughout prove less successful and feel slightly forced. In theory, the idea of using music to portray the magical obsessive love should work; however, lack of diction, mediocre vocals, and poor song choices mean that in practice it falls slightly flat.

The whole ensemble work well together to ensure the comedic timing is spot on through both dialogue and physicality, but it is the scenes featuring Jonathan Broadbent and Ferdy Roberts as Oberon and Puck respectively that are most successful. Oberon is played as an awkward and slightly geeky superhero while Puck is presented as a lazy stagehand. These unconventional creations work surprisingly well with both actors putting in standout performances. Liberties are taken with the Bard’s original script, changing the intention of lines at times and creating double-entendres. The direction allows all the actors to excel in their roles and the many quirks and surprises that are added to the show are both intelligent and tactful.

Directors Sean Holmes and Stef O’Driscoll understand the delicacy needed in slapstick theatre and use the silliness of the play to create some great comedic moments. Sight gags, crude humour and satire are mixed together and the silliness that follows is enjoyable and charming. On a couple of occasions it does feel like the actors are having more fun than the audiences—during a particularly long food fight for instance—but in the most part the jokes work well and the play is continuously amusing.

This isn’t a ground-breaking production and is unlikely to leave too much of a lasting impression, but it is very fun, witty, well produced, and should be applauded for its brave and overall successful reimagining of A Midsummer Night’s Dream.