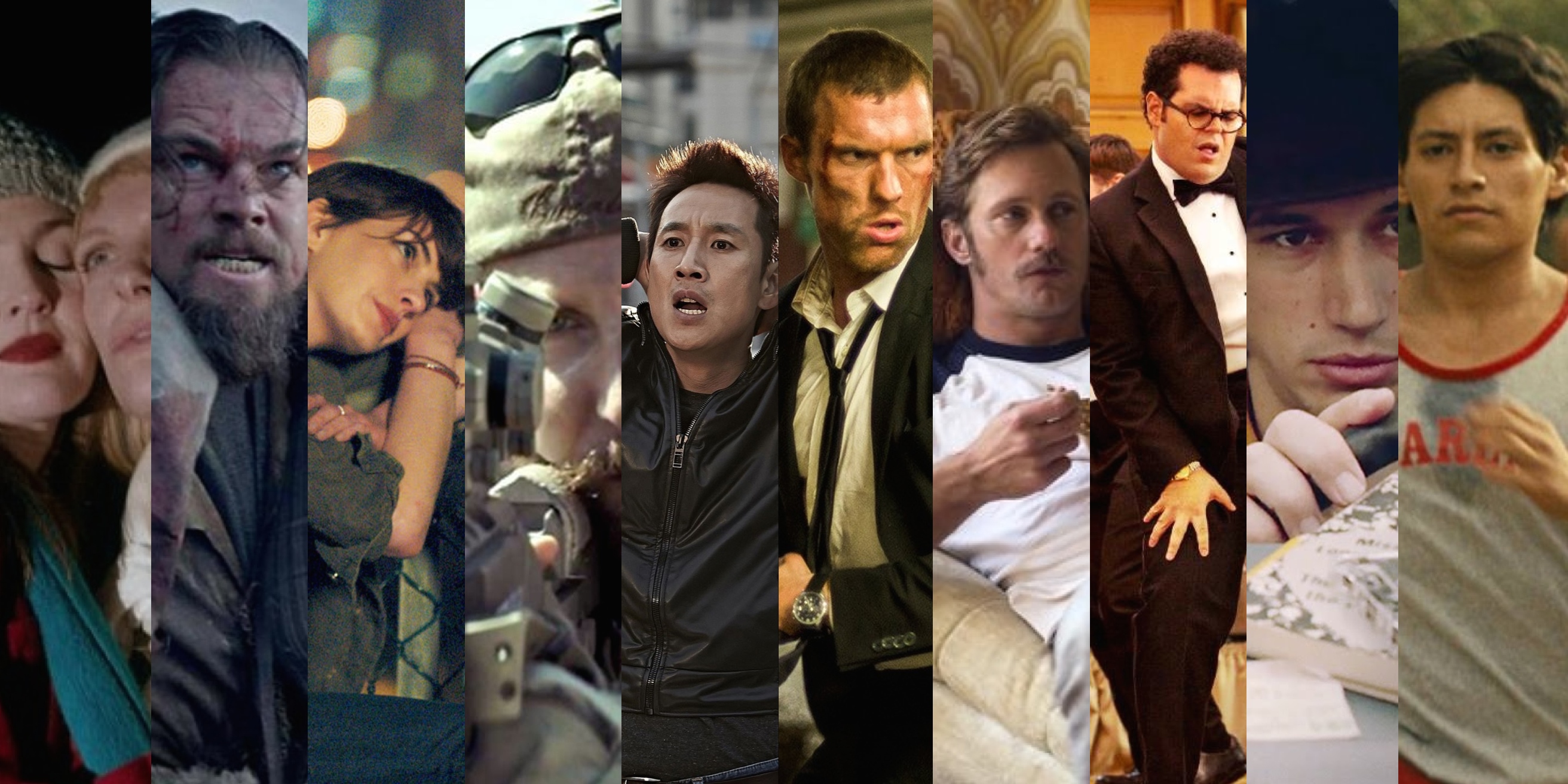 The most mixed of mixed bags, this group is mostly good movies I didn’t like much and bad movies I liked too much.

81. Miss You Already
Drew Barrymore isn’t a great actress but she has a distinct warmth that makes her easy to root for. Toni Collette, on the other hand, is an unquestionably great actress who can make almost any material work, even this predictable and even somewhat manipulative cancer tale. Dominic Cooper also makes a key assist as the improbably wonderful husband of cancer-stricken wild child Collette.

82. The Revenant
This totally brutal survival story has a great cast (Tom Hardy and Domhnall Gleeson are fantastic), some extraordinary landscape shots, and intermittent moments of incredible tension. It’s not a pleasant experience and it’s far too long but it’s a well-made, occasional tremendously impactful film.

83. Song One
A lot like last year’s Rudderless, this is yet another tragedy-laced power-of-songwriting drama. But the tragedy is far less poignant here, which allows it to be completely overshadowed by a sweetly tentative romance between producer Anne Hathaway (overplaying the “I’m in an indie movie” vibe and abandoning her natural charm) and Johnny Flynn, a real indie singer-songwriter playing a fictional indie singer-songwriter with just the right amount of “I’m in an indie movie” underplayed sincerity to show up Hathaway. The romance was easy to invest in (largely because Flynn and his character are extremely easy to invest in) and the tragedy might have been interesting if we’d spent more time with the key tragic character (who spends most of the movie in a coma being vaguely spoken about) but those two elements undermine each other a bit too much for either to really work. Bonus points for a great soundtrack.

84. American Sniper
I’m conflicted about this so-late-in-2014-it-actually-came-out-in-2015 movie. Bradley Cooper is incredible in it (like, best of his career type stuff), Kyle Gallner’s great too, but Clint Eastwood turned a fascinating story into a simplistic, pandering “‘merca, fuck ya!” piece of propaganda. It’s a real shame.

85. A Hard Day
This Korean cop movie is tense and brutal if not groundbreaking. If it was in English and starred, say, Bradley Cooper, it would be considered super mainstream and receive very little critical attention but neither of those things would mean it’s not a good movie. Sun-kyun Lee is a wonderfully emotive leading man.

86. The Transporter Refueled
This is actually a pretty good movie. I mean, the whole thing is just one long Audi commercial but it’s a fun, well-crafted Audi commercial with characters who are decently interesting to follow. Also, the insanely beautiful Ed Skrein is ten thousand times more suave than Daniel Craig, putting this Bond-y film much higher than actual Bond on the long list of many Bond-y films this year.

87. The Diary of a Teenage Girl
Based on a graphic novel, this story of naiveté is often grating, nevermore so than whenever the cheesy narration is over-explaining and wrapping an otherwise very complicated story up in a very simple, tidy bow. However, the graphic illustration integration is really cool and both Kristen Wiig and, especially, Alexander Skarsgård deliver career-topping performances that make this off-putting film into a strange must-see.

89. While We’re Young
The point of this at-times charming but ultimately quite off-putting comedy is ultimately just that annoying Gen X declaration of “Millenials, ugh”. Amanda Seyfried and, especially, Adam Driver are portrayed as selfish, manipulative hipsters whose flaws are less personal than a symptom of their generation. The cast is great and I could watch Naomi Watts dance hip hop for hours but it’s mean spirited and I have trouble getting over that.

90. McFarland, USA
Sports movies are so great. I immediately forgive their ridiculous trope-iness because they make my heart sing with “anything is possible” joy. This one is kind of dumb but your heart has to be awfully cold to not cheer for the triumph of Danny Diaz, at the very least. Carlos Pratts is incredibly charming as the classic brooding star runner, Valente Rodriguez is a breath of fresh air as a realist principal and Diana Maria Riva steals the movie as the hilarious Senora Diaz.