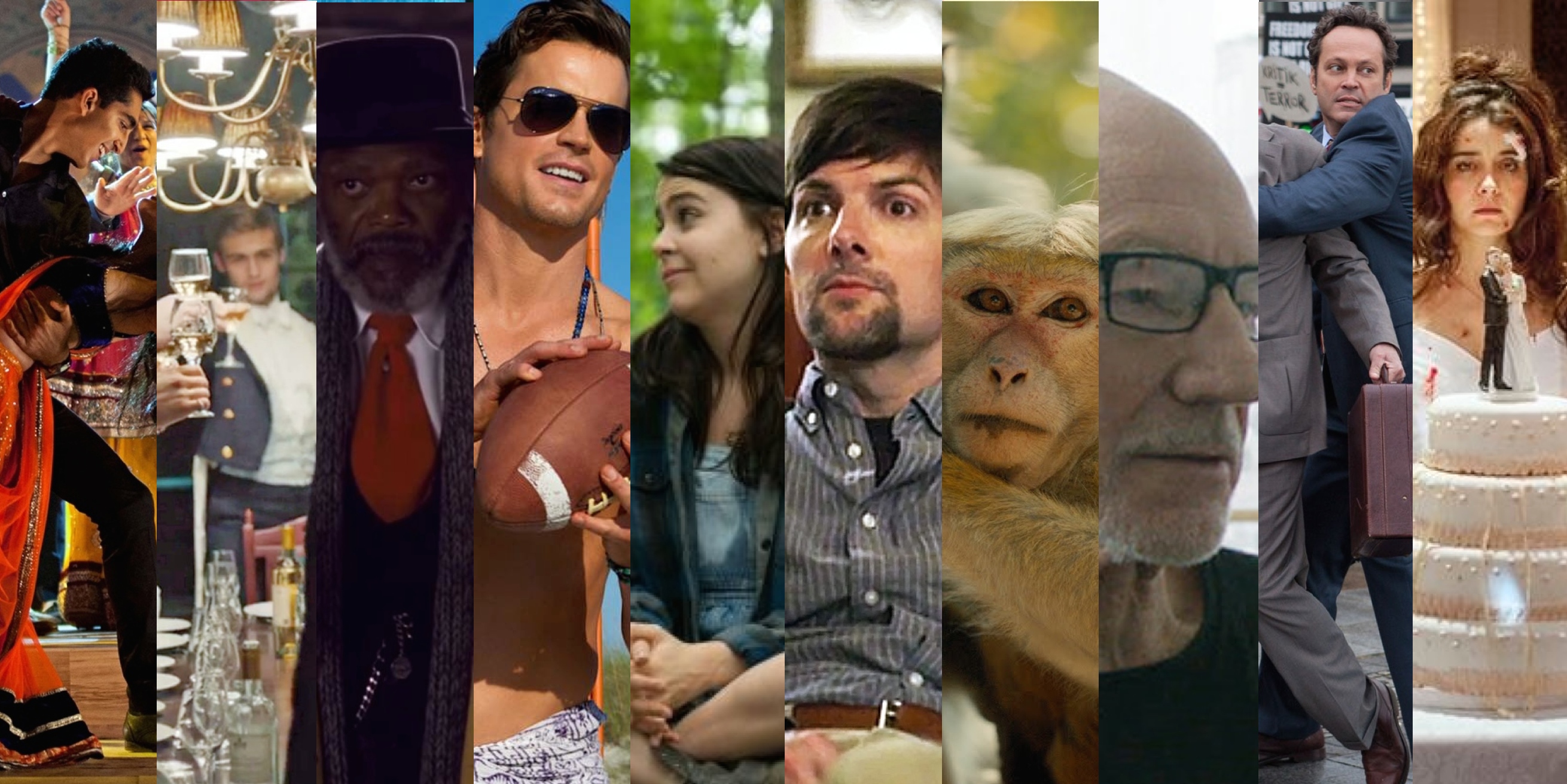 We’re getting there, guys. Many of these are actually really good.

61. The Second Best Exotic Marigold Hotel
Adorable. Dumb, totally unnecessary and not nearly as good as the first one but Adorable. Give me more Dev Patel. Give me all the Dev Patel. Someone cast Dev Patel in something right now, please!

62. The Riot Club
This searing ensemble drama is a lot about privilege, pretention and how dangerous it is when anyone feels untouchable. It’s even more about the horrors of mob mentality. It should probably be ranked higher for content (strong themes, big impact) and execution (across the board fantastic cast featuring a whole host of killer young men like Ben Schnetzer, Sam Reid, Sam Claflin and Douglas Booth) but it’s a hard experience to get through and characters always lose me a bit when the right answer is so clear yet they refuse (for thematic effect, usually) to do anything about it.

63. The Hateful Eight
Tarantino’s eighth film is actually a lot like Riot Club, but with cowboys instead of prep school kids. What it’s not particularly like is his previous two films (both of which I adore) despite the fact that this is his second western in a row (and it’s definitely time to move on). It’s classically Tarantino in style- brutal, beautiful and theatrical with gorgeous cinematography making great use of the 70mm film you’ve heard so much about. But remember how invested you were in Django as a human being? There’s none of that here. There’s a (very) brief moment when Channing Tatum, of all people, pulls out a little heart but of course that’s undercut instantly. There’s no one here to grab on to, no one to invest in or root for or even despise enough to desperately want dead. It’s Tarantino’s least funny film in ages (though there’s a line or two that absolutely kills) and his point is not immediately apparent. With a runtime of more than three hours and a glacial pace (with way too much character exposition) throughout the first half, intermission is a welcome relief and the second half (especially its first chapter or two) is far better than the first but it’s still not even close to what Tarantino can do when he lets his heart have more of a say.

64. Magic Mike XXL
The sequel to the disjointed but generally pretty good original Magic Mike is a very badly executed film. There’s no real plot to speak of, the dialogue is beyond hack-y, the characters are broad sketches at best, the love interest is an infuriating dud and Gregory Jacobs’ direction is atrocious (almost every single shot lasts too long and many are of the least interesting thing happening at the moment) but damn if I wouldn’t pay again in a heartbeat to watch Matt Bomer ignite a downtrodden middle-aged woman’s sexual appetite and self confidence by singing Bryan Adams’ “Heaven” (that man is magical). Other highlights include Jada Pinkett Smith in fine feisty form calling for a pair of “grown-ass women” to participate in the big final number, Joe Manganiello quadrupling his sexiness by showing some personality and sense of humor as he dances to the Backstreet Boys in an attempt to make a checkout girl smile, Donald Glover appearing to have fun for the first time since season three of Community, and tWitch because tWitch. It’s a pretty bad movie- do not get me wrong- and there are plenty of scenes that are so desperate for female fandom that they’re just plain awkward, but there are definitely a few scenes that make the ridiculousness worth sitting through.

65. The Duff
This teen rom-com is pretty formulaic and silly but somewhere underneath the tired premise lies a sweet romance and, more importantly, a pretty great story about insecurity and friendship and what happens when you let the former redefine the latter. More people should hire Mae Whitman.

66. The Overnight
This is a movie about a man with a really small penis (Adam Scott) and a man with a really big penis (Jason Schwartzman) who hang out with their wives for a night. There are more nuances to it than that but that’s really the gist of it.

67. Monkey Kingdom
Disney Nature, man, they never fail to deliver a slam-dunk doc to celebrate earth day. Monkey Kingdom tries a little too hard to craft a relatable narrative but remains one of the most extraordinarily shot films of the year.

68. Match
I was really really looking forward to this low-profile Netflix release about a reclusive ballet dancer played by Patrick Stewart. How amazing does that sound?! Unfortunately, the ageing dancer part isn’t really the heart of the story, more a character detail and complication. I won’t give away the plot because it’s a deceptive one but suffice to say it’s interesting but a little strained. Carla Gugino and Matthew Lillard are stunning as a young couple looking for answers. Stewart is studied and detailed and hard to root for.

69. Unfinished Business
I know this is way too high for a stupid Vince Vaughn flick but it was charming, okay! I found it genuinely funny (in a simple way, but still), the ensemble has strong chemistry, and it’s a film that has a big heart and something to say. That something isn’t groundbreaking, but at least it’s something. Bonus points for Marsden, always.

70. Wild Tales
The vignettes that make up this Spanish anthology film are all engaging and well-shot. The first (and the shortest) is the cleverest but the last (and the longest) is the most involving. None are particularly rife with emotional truth but they’re hilarious in an absurd way and never predictable. Wild Tales is technically a great film but it falls fairly low on this list mostly because I don’t think it should really count as a feature film. It’s really more a series of shorts tied thematically together by hatred and revenge.