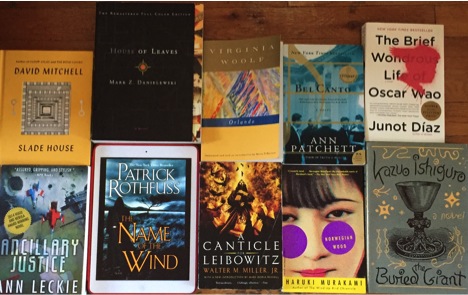 2015 was an incredible year of reading for me. I read as many books as I could get through and was fortunate enough to meet several of my writing idols—David Mitchell (for the second time), Junot Díaz, Elizabeth Gilbert, and John Hodgman. As December’s calendar pages fly off the wall all too readily, I’d like to take a moment share the literary love and get the word out about my favorite reads of the year. Here, in no particular order, are ten books that shaped my 2015 and provided notable experiences of self-reflection and creative enrichment. I hope you have/will enjoy these books too and wish you happy reading in 2016!

1) Slade House, by David Mitchell
“Grief is an amputation, but hope is incurable haemophilia: you bleed and bleed and bleed. Like Schrödinger’s cat inside a box you can never ever open.”

David Mitchell, author of Cloud Atlas, puts the horror genre under his microscope in this meticulously crafted five-part novel, which grew out of a story he serialized on Twitter. The threat of a fate worse than death looms throughout as characters find themselves caught in a web of ghost stories—traditional, psychological, emotional, pharmaceutical, meta-. If you’ve read The Bone Clocks, you’ll be delighted/horrified by the return of some familiar faces and the continued exploration of certain subjects. If you haven’t, Slade House will make you want to. I read Slade House in a single sitting right around Halloween this year and may just have to make an annual tradition of it.

2) House of Leaves, by Mark Z. Danielewski
“Prometheus, thief of light, giver of light, bound by the gods, must have been a book.”

I have never been more freaked out by the written word. Just flip through this book and you’ll see how wonderfully deranged it is. Exploding the limits of traditional typography, Danielewski constructs a multi-layered exploration of a house that shouldn’t exist and the existential strains it places on the people who interact with it. Interior measurements exceed exterior measurements, hallways appear out of nowhere, and doors open to a boundless labyrinth of darkness that consumes sanity, time, and the laws of physics. It is a love story.

3) Orlando: A Biography, by Virginia Woolf
“A million candles burnt in him without his being at the trouble of lighting a single one.”

Given the increasing visibility of transgender people in society and awareness of the discrimination they face, it was a fascinating exercise reading Virginia Woof’s 1928 fictional biography of an individual who is born anatomically male in Elizabethan England and dies anatomically female several hundred years later. It is the equally humorous and emotionally gripping story of Orlando’s journey to find love, creative muse, and ultimately herself. Despite the inclusion of a number of gender non-conforming individuals, Woolf’s characters are still heavily defined in terms of their conformity to traditional gender roles—though we do see how these roles change over the centuries. Woolf cannot escape a binary conception of gender, but she does write from within its bounds to call in into question.

4) Bel Canto, by Ann Patchett
“She sang as if she was saving the life of every person in the room.”
This page-turner provides a timely reminder regarding the personhood of strangers, foreigners, and one’s enemies. Hope wanes low as a hostage crisis stretches on for days, weeks, months, within a South American vice-presidential residence. Everything changes when a world-famous soprano opens her mouth to sing. The power of music slowly dismantles walls of linguistic and political difference to expose the common humanity of the terrorists and their captives. I wish I could fly off to see the Lyric Opera of Chicago’s opera adaptation of the novel that’s running through January 2016; this book certainly deserves to be adapted at so grand a scale.

5) The Brief Wondrous Life of Oscar Wao, by Junot Díaz
“You really want to know what being an X-Man feels like? Just be a smart bookish boy of color in a contemporary U.S. ghetto. Mamma mia! Like having bat wings or a pair of tentacles growing out of your chest.”

The Brief Wondrous Life of Oscar Wao is the magically realistic saga of a Dominican immigrant family in New Jersey. It follows Oscar—an overweight nerd who dreams of falling in love and becoming a great fantasy writer—and his relatives as they struggle against a curse that has haunted their family for generations. Díaz really focuses the scope of his novel, but in telling the story of this specific family, he hints at broader shared Dominican and immigrant experiences. He saturates his writing with delightful sci-fi and fantasy references, despite how otherwise down to earth his characters’ journeys are.

6) Ancillary Justice, by Ann Lecke
“‘These people are citizens.’ I replied, my voice calm and even as I could make it, without reaching the dead tonelessness of an ancillary. ‘When they behave properly, you will say there is no problem. When they complain loudly, you will say they cause their own problems with their impropriety. And when they are driven to extremes, you say you will not reward such actions. What will it take for you to listen?’”

Ancillary Justice is the only novel ever to win the Hugo, Nebula, and Arthur C. Clarke Awards. That is a huge deal! It is the first book in Ann Lecke’s recently completed Imperial Radch space opera trilogy. The narration of Ancillary Jusice definitely requires significant focus to follow, especially at first until you get used to it, but it’s worth it. The narrator switches between a single consciousness to the multitude of AI consciousness that comprised her when she was a starship 1000 years earlier. Additionally, she and the rest of the empire, do not distinguish people by gender, so the narrator employs female third person pronouns for everyone and will often guess gender incorrectly if required to choose. I quickly became aware of my personal reliance on gendered pronouns and the unfounded gender assumptions I subconsciously make when reading. I do love a good reality check. Lecke’s trilogy fulfills all of your sci-fi cravings, all the while writing about struggles that are all too reminiscent of our society’s shortcomings.

7) The Name of the Wind, by Patrick Rothfuss
“It’s like everyone tells a story about themselves inside their own head. Always. All the time. That story makes you what you are. We build ourselves out of that story.”

The Name of the Wind is the first book of The Kingkiller Chronicle trilogy. It found me exactly when I was craving a fantasy novel of substance and it fulfilled that need in spades. Rothfuss takes the action and intrigue of A Song of Ice and Fire and meshes them with the whimsy and magic school setting of Harry Potter. The result is a formidable chimera, worthy in its own right, which will almost certainly be turned into a movie or television series within the next few years. Also, I do loves me a red-headed protagonist, even if “Kvothe” is a hard name to pronounce.

8) A Canticle for Leibowitz, by Walter M. Miller
“But neither infinite power nor infinite wisdom could bestow godhood upon men. For that there would have to be infinite love as well.”

Nuclear apocalypse brings about a new Dark Ages, and humanity must pick up the scraps of science and religion in order to rebuild a society that is powerful enough to destroy itself again. Grocery lists become relics; technical blueprints are made into illuminated manuscripts. Originally published in 1960, A Canticle Leibowitz’s relevance has only grown with interest over the years. At times playful, at times haunting, this novel asks the hard questions about humanity’s future and the goals/purpose of technology and theology. I really want to adapt this book into a musical. It deserves to be heard.

9) Norwegian Wood, by Haruki Murakami, English translation by Jay Rubin
“I want you always to remember me. Will you remember that I existed, and that I stood next to you here like this?”
Norwegian Wood is loss laid bare. The Beatles song of the same name functions as Proust’s madeleine to the narrator, Toru Watanabe, who looks back on his college years, particularly on the relationships he has with two young women. The book, otherwise pervasively melancholic, is flecked with moments of pure happiness, as significant as they are evanescent. As with Murakami’s The Wind-Up Bird Chronicle, I have to give so much credit to Jay Rubin for providing a translation that carefully preserves the poetry of he author’s text and doesn’t make me feel like an outsider. Make sure you’re in a stable place emotionally before picking this book up, unless other people’s hardships help you feel better, then by all means…

10) The Buried Giant, by Kazuo Ishiguro
“The giant, once well buried, now stirs. When soon he rises, as surely he will, the friendly bonds between us will prove as knots young girls make with the stems of small flowers.”

The fantasy genre may be new to Ishiguro, but it fits him like a glove. Or should I say, gauntlet. On the surface, The Buried Giant is post-Arthurian tale of an old couple’s journey to visit the son they vaguely remember having. The land is beset by a mysterious shared forgetfulness of a dark past that is gradually revealed through the couple’s encounters. Digging deeper, the book is a parable of memory, guilt, and suffering, but you’ll still need a much bigger shovel to truly excavate Ishiguro’s giant. The novel left me spellbound by its ending that is simultaneously cathartic and devastating. Guardian reviewer Alex Preston describes the book as “Game of Thrones with a conscience,” if that’s even possible.