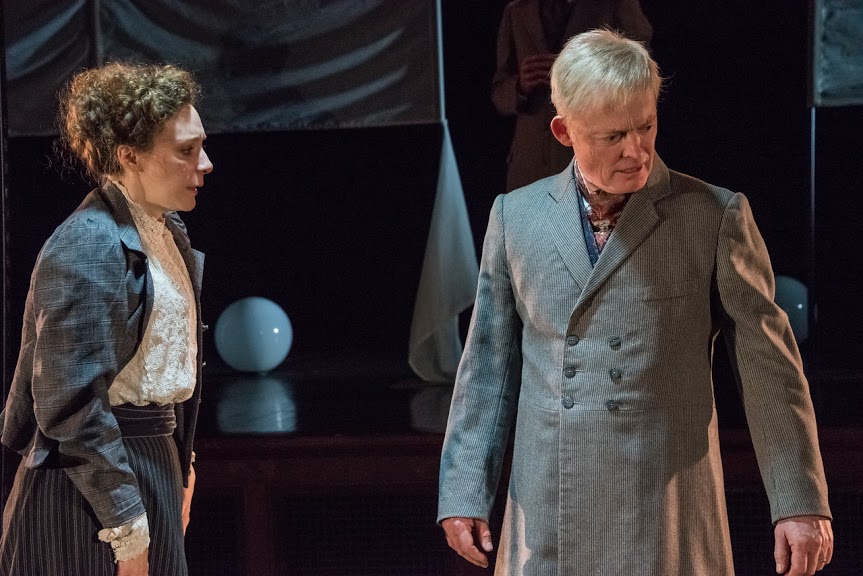 I am pleasantly surprised by the recent renaissance of interest in Shakespeare’s The Winter’s Tale. This summer I attended a delightful all-female production staged by Maiden Phoenix Theatre Company in a Somerville park, free for all to attend. This year Jeanette Winterson released her novel version of the play, The Gap of Time, published by Hogarth Shakespeare. In January, I plan to attend a film screening of the Kenneth Branagh Theatre Company production, performed by no-less than the likes of Kenneth Branagh and Dame Judi Dench (the attraction of seeing the latter will help me stomach the performance despite the former).

And now, Actors’ Shakespeare Project has staged the show at United Parish, in Brookline. The production is directed by Melia Bensussen, who points out in the program notes that “the play is not bound by genre, nor confined by the rules of nature.” The inherent weirdness of the play, exemplified by its rapid flip from tragedy to comedy, and the passage of sixteen years that occurs between Act 3 and Act 4, is appealing. Unfortunately, this production seems to be too much drawn to the freedom that comes with staging “weirdness.” Odd staging decisions coupled with an incredibly lackluster performance from the male lead made ASP’s Winter’s Tale drag too long into the night.

The play showcases snap decisions and eternal regrets, boiling passions and endless brooding, love, betrayal, loss, and redemption. King Leontes (Allyn Burrows), monarch of Sicilia, upsets the alliance between his nation and Bohemia when he accuses his best friend since boyhood, King Polixenes (Nigel Gore), of committing adultery with Leontes’ wife, Queen Hermione (Mara Sidmore). Leontes loses his friend, his queen, his children, and his advisor Camillo (Jesse Hinson) in his rashness. But sixteen years go by, and a new generation of lovers, aided by a kindhearted shepherd (Burrows), a swaggering swindler (Steven Barkhimer), the possible magic powers of Hermione’s friend Paulina (Marianna Bassham), and the hunger of a famous scene-ending bear, push The Winter’s Tale back from the brink of tragedy to a (possibly) happy ending. No other Shakespeare play is like it.

But the strangeness of the plot should not lead to arbitrariness in staging. The play is aided by minimalism, and I think it was wise to stage it in a church, on a set created by pushing the audience to three sides of the space (set design by Cristina Todesco). But I could not account for the odd placement of metal beams, small round light bulbs, and plain white sheets that made up the centerpiece of the set. Nor could I find much cohesion in the occasional use of music, of the music-box, fantastical sort (sound design by Dave Remedios). The decision to have an actor (Barkhimer) mouth the voice of Leontes’ son, the prince Mamilius, in lieu of having a young person perform the child’s role felt misguided. And the decision to dress the actors in (mostly) Edwardian clothing, however nicely tailored, seemed apropos of nothing considering the nonspecific set and distinct lack of period props (costume design by Mary Lauve).

Brilliant acting could have somewhat made up for confusing staging. And I found great acting in Barkhimer’s grave Antigonus and suave Autolycus, in Sidmore’s commanding Hermione. I especially snapped to attention whenever Bassham strode the stage. Her Paulina felt modern in its fury, without sacrificing any of the depth of the early modern text. She managed to convey a surprising amount of humor in her fearless reprimands of Leontes, making their confrontations electric.

Well, electric as they could be. The Winter’s Tale rests heavily on Leontes, who gets the lion’s share of the play’s lines. It is a difficult part. Leontes has to swivel from courtly graciousness to dangerous jealously, to cold fury, to a thirst to humiliate, to murderous rage, and just as quickly to horror, to penitence, to heartbreaking regret. To play these shifts without alienating the audience, to portray this gamut of emotions without damaging the narrative cohesion of the story is a delicious challenge for any actor.

Burrows did not play Leontes poorly. He seemed not to play Leontes at all. All we saw of the King of Sicilia was a gentleman who paced to and fro across the stage, pendulum-like, who talked and mouthed all the right lines in all the right places, and yet lent them no fire, no power, no life. It was like watching someone stand before a delicious feast, and refuse to take a bite.

I hope more local companies, community, fringe, and professional alike, take up The Winter’s Tale as a quintessential Shakespeare to stage. Go ahead and drop Romeo and Juliet, Much Ado About Nothing, and even Hamlet (for a little while, anyway), and try on this exquisite play for size. But please, perform it with zest, with joy, with all the ursine might you can muster. Please don’t leave your audience with a “sad tale,” even if it is “winter.”

Actors’ Shakespeare Project’s production of The Winter’s Tale is playing now through January 3rd, 2016, at United Parish in Brookline.