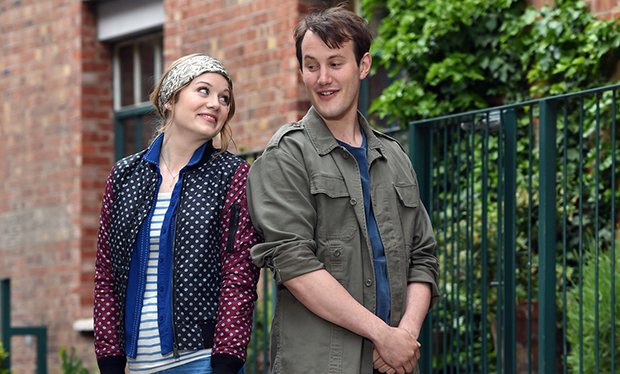 Such a Short Time Together?

I know everybody’s really into the UK 6-episode TV model but there is no world in which I’m happy that Together, BBC3’s charming, strange, hilarious, heartwarming little gem lasted a total of, what, Two Hours once you factor in commercials? Why not just make a film and be done with it?

I wanted to live in the Together universe for awhile. I wanted to get to know Tom (series creator Jonny Sweet) and Ellen (Cara Theobold) as a couple instead of just getting to watch them very cautiously become one. I wanted more development for Tom’s deliciously delirious parents (Vicki Pepperdine and Alex Macqueen, both genius). I wanted to make his straight-talking sister Maeve (Katy Wix) my new TV-best-friend (sorry, Mindy) and love to hate Sarah Daykin’s absurd Hermione until death do us part. The soft centre underneath Hermione’s sociopathic shell was Just Starting to show when the season wrapped up with no sign of renewal (there’s always hope but BBC3 is barely hanging on so I’m not holding my breath).

The, admittedly lovely, ending of Together came so quickly that I wasn’t even sure it was over. I scoured the internet in search of definitive news of the episode order or even the words “Together” and “finale” in the same sentence. The show has no Wikipedia page, the BBC3 site is useless, the creator’s website is defunct and he hasn’t tweeted since July! It was only when I stumbled on the twitter of Cara Theobold (who played the subtle and sweet leading lady, thankfully out-charming her Downton Abbey role a thousand fold) that I knew for sure it was over. Not only did these people make a mere two hours of television but they told almost no one about it!

I suppose it is better to have loved and lost than to have never loved at all and oh, how I loved Together in our brief time, well, together. Excuse me while I wallow and build up the courage to love again.