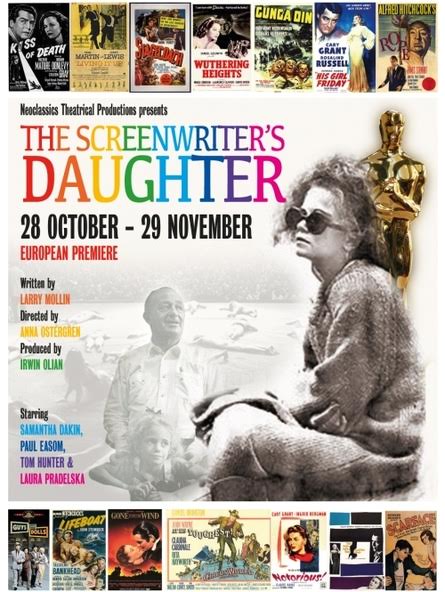 The Screenwriter’s Daughter is a compelling piece of theatre: a humorous, entertaining and historically enlightening new play currently showing at the Leicester Square Theatre. It revolves around the later life of Ben Hecht, a relatively unknown yet prolific and successful screenwriter during Hollywood’s Golden Age, and his increasingly tearaway daughter, Jenny, a counter-cultural revolutionary and child of the sixties. The play tackles the complex relationship between the two, bringing fascinating staging and strong performances into what is an interesting foray into generational divides, the gradual transition of idealism into cynicism and the complicated father-daughter relationship. Its semi-biographical nature adds to the play’s appeal, lending an intriguing insight into a character of such substantial theatrical and filmmaking significance, making this play a must-see for anyone interested in such history.

Set in the later years of Ben’s life, The Screenwriter’s Daughter focuses on a pivotal moment in Ben and Jenny’s relationship, as free-spirited Jenny asks for her father’s blessing to travel to England and join an alternative, and semi-revolutionary, theatrical troupe The Living Theatre. Staged primarily through telephone calls, what follows is essentially a spoken screenplay, outlining how Ben foresees his daughter’s life playing out after this impasse—a screenplay which is in fact an accurate foreshadowing of what is later to come in reality. Often breaking the fourth wall and seemingly engaging with the audience, the divides become clear between the tired Ben, a human rights activist, Zionist and idealist in his youth, and Jenny, a neo-Marxist revolutionary with much the same idealism but none of the compromises which age ultimately brings.

Paul Eason is excellent in his performance of a frustrated and sometimes hypocritical Ben, effectively portraying a character desperately trying to convince his daughter that a ‘new world order’ is not the only answer and that compromise is sometimes necessary. Samantha Dakin is similarly strong in illustrating Jenny’s interior—though not always evident—conflict between her rejection of the established society and enduring attachments to her father, all the while being told to break off those attachments by Tom Hunter’s revolutionary comrade and lover, Steve. The simple staging and strength of these performances is absorbing and engaging throughout, while its short length and brisk pace ensures that there are no opportunities for the mind to wander. The play’s only missteps lie in a largely unnecessary and tonally out-of-place sequence in which fellow members of the counter-cultural collective join the stage and some of the dialogue is lost in the ensuing chanting and music. Also, some characters, such as Ben’s presumed assistant Lester, are largely unnecessary and do not add much to what is essentially a story between Jenny and Ben.

In summary, The Screenwriter’s Daughter is certainly worth a look-in during its brief run. Focusing on a character who, in fact, rhetorically asks the audience at one point if anyone will have heard of him in fifty years time, it seems a grave oversight of history that such an important figure can be overlooked. Banded with an intriguing relationship framed in the conflict of the Sixties, there is much to enjoy in The Screenwriter’s Daughter and it is almost guaranteed that Ben and Jenny Hecht will be high on the ‘to google’ list for anyone leaving this interesting new play.

The Screenwriter’s Daughter is showing at the Leicester Square Theatre from the 6th November to the 29th November. Tickets are available HERE.