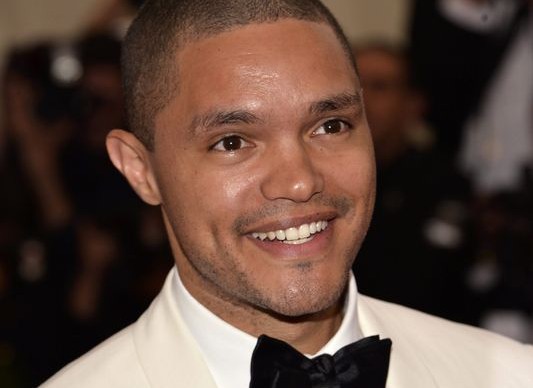 The Daily Show with… Trevor Noah

I am finally read to say it: I love Trevor Noah.

The most remarkable part of all this is that The Daily Show, with its new host, remains The Daily Show. It remains a tiny voice of acerbic sincerity in the midst of a sea of politics and media. It remains witty and passionate and above all smart – researched and thoughtful and funny. And it remains ever so fucking necessary – especially after a tragedy, especially as the world struggles to put the pieces back right.

I was planning to write this piece about Trevor Noah at his 1 month mark. I even started writing it. I talked about how witty he was and how fresh his perspective was and how I thought he would grow into the pieces that weren’t quite gelling yet – his tendency to laugh at his own jokes, the times where it feels like he’s doing a Jon Stewart impression – but my own piece felt stale. Sure I could drop the same buzzwords that the old guard joked about in Stewart’s going away show – global, millennial perspective; new ability to investigate race issues; the new age of Daily Showdom – and I could compliment Noah’s political chops and humor, but there wasn’t enough to really say.

My love for him, and for this new incarnation of The Daily Show, didn’t really come together until I watched this Monday’s episode and thought about how legitimately refreshing it is to hear from Trevor Noah on the role of hatred and hope in the wake of a terrorist attack. He doesn’t have the gravitas or the deep trust that we had with Stewart yet – because of course he doesn’t. But I am grateful for the fresh perspective and for the confidence Trevor Noah brings to a show that still kicks after the man who made it great abandons it in order to drop f-bombs on premium cable.

I’m not sure how hard the next year is going to be. Between the presidential election and the painful racism and bigotry that will follow the terrorist attacks in Paris and Beirut, it’s pretty much guaranteed to not be a barrel of laughs. Once Trump and Carson are out of the race, it’s going to get even LESS funny, so I’m grateful to the Comedy Central Gods that I still get my little oasis of sanity through The Daily Show.

Look, I love Daniel Craig as Bond. He has off outings, and he has great outtings, but through them all I think he’s a fantastic version of this character and that his version of it brings to light all the things that keep Bond relevant in the Digital Age. But when Idris Elba dons the bow tie, it wont discredit the work of Craig (or Brosnan, or fucking Roger Moore if you wish); but it sure as hell WILL be awesome.