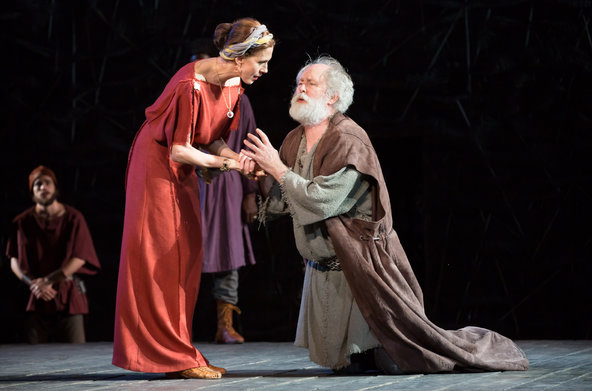 I don’t much care for Shakespeare, but I wonder what my father thinks of King Lear. There was a magnificent (and free) production of the tragedy in Central Park in summer 2014, casting a white-bearded John Lithgow as the mad king. On a stark, distressed wooden platform, the geezer spat fire and lightning at his fool, his advisers, his enemies, at just about everyone except the audience, with whom he was exceedingly generous and patient, the very soul of kingliness. Seeing Lithgow’s transition from venerated ruler to bedraggled geriatric, I have a hard time not thinking of my father.

There is no question in my mind that Dad has read King Lear. The books that fill his ranch home in the Texas Hill Country are so severely stacked, in so many places, I often get the impression I’m wandering a chest-high labyrinth constructed by some sadistic librarian-types. Like any good labyrinth, it has monsters: scorpions, spiders, the occasional field mouse or baby bird, or the giant, passed-out corpus of my fallen father, who, while stretching a little too far over a stack of travel books to pull an aged volume on classical Indian music, put an extra pound or two on an already-overtaxed ankle and took a tumble to the floor. This maze is vast, but it’s a poor representation of the real library, the one inside Dad’s head. There, meticulously organized and lovingly dog-eared, are seven or eight different languages, twenty-plus patents of various design and application, detailed engineering diagrams, and the great compositions of the Greeks, the Indians, the Romantics, the philosophers, the novelists, maybe even a Russian or two. This is a man who is more than well-read. My father spends almost as much time reading as he does sleeping, eating, going to dialysis, or just about anything else. It’s his habit, from his years in the school and prison systems, kept sacred like a bronze goddess on a kitchen shelf.

But knowing that he’s read the play, I wonder how he would feel about being compared to King Lear. My father is not so fatuous as to believe the two of them share nothing in common – certainly he can see the familiar patterns of betrayal, loss, and madness in his own life. His sisters could be compared (and probably are, in his head) to Lear’s daughters, who gave somewhat less than ideal responses when their father needed their aid. I, of course, can also play this part. To his mind, I am the frustrating only child, the one who does not return letters or calls, the one who can’t stop by with bags of food now and then, and stay to fix the roof, mow the lawn, scrub out the refrigerator. One of our conversations many years ago ended in a Taco Cabana, both of our mouths filled with cheese-and-bean breakfast tacos, Dad telling me how much he wished I’d grown up with him, his way of wishing for parenting. “Because of your mother,” he grumbled, “You’re more of a woman than a man.”

And of course, who else is more prosecuted than Lear or my father? He lives alone (albeit by his own, maddening choice) on a sun-blasted, dust-blown ranch, with no one to help him up after a fall in the book-labyrinth, no one to take him to the doctor, no one to tell him to fix the cracks in the walls so the rain won’t come in. His own body is against him, with both kidneys gone to diabetes and a vague fringe of hair left on his bespectacled, ponderous head. His sisters won’t pay him what he thinks he is owed, his doctors won’t follow his advice, his friends won’t come to visit him, his employers won’t pay him enough. For my father, life is worse than Crusoe’s: alone at the end of the world, abandoned, wretched and damned, the colonialist bastard at least had savages to bully. Lear had a fool to abuse. Dad doesn’t even have a dog to kick.

Certainly, all of these points form a valid-sounding argument for my father’s ears. But I can sense that he’d fight it. There’s not really a sense of noble lineage in our family, aside from a dubious genealogical connection with a 15th century horse thief or chieftain (jury’s still out on which). Dad doesn’t really have a kingdom to divide up, so a lot of the precipitating conflict that happens in the tragedy never happened for him. He’s also got steep medical bills to pay and a kidney donor to find (mine is no good, because genetics), so retirement is the last thing on his mind. There are no hundred knights in his train, not a single soul around him to profess their loyalty, carouse in great halls, or die from the clap. Without all of this, Dad might say, the entire first act of Lear really only applies to his life in a hagiographic sense. The broad strokes are the only points of comparison – a prosperous man, a father, finding himself forsaken by all others – and that’s hardly a good enough critical basis for him to allow.

Moreover, Dad would resent the comparison. Why should he be displayed next to the tragic protagonist of some Elizabethan sodomite’s failed play? His mind has not failed him so greatly, his hubris isn’t as great as Lear’s, and what’s more he doesn’t bemoan his circumstances like a wailing cat. My father is full of grit, made of gristle, tough as nails, the Indian Clint Eastwood of the Texas desert. He survived an abusive father, poverty, malnutrition, unemployment, and prison. He’s been stabbed, mocked, defrauded, and divorced by women beyond count. But he never complains. If his back hurts, he doesn’t complain. If his shoes don’t fit, he doesn’t complain. What is the use, he would ask, of attempting a relation between him and a hysterical madman who wants to be king again?

There is no answer, but Lear was able to reunite with Cordelia. When he awoke to her kiss, rapprochement was only a matter of waiting. It makes her death at the end all the more painful, that Lear, still mad but sane enough to grasp the immensity of the loss, experiences a grief of such a profound magnitude that it lays him low beside her. Leonardo DiCaprio’s character from Inception reveals that “we all yearn for reconciliation, for catharsis,” especially in the case of estranged children, but all of us are estranged children. We all want the moment when the parent shares something deep, emotional and lovingly prideful with them. The French knights found Lear mad and Gloucester blind, but it didn’t stop them from bringing him back to his daughter. Madness didn’t stop the power of the father-daughter connection. It didn’t stop Lear from saying, “You must bear with me. Pray you now, forget and forgive. I am old and foolish.”

Stupid as it is, I can’t accept the fact that this will never happen between us. We don’t speak because I was unwilling to continue our relationship after a particularly heated fight, but I still want him to keep in communication, to let me know what’s going on. He sends emails and I don’t reply, because I am waiting for that phone call, that meet-cute of cinema reunions. I have a lot of resentment towards him – for his mistreatment of my mother, for going to prison, for not knowing how to be a father – but the heart wants what it wants.

Without question, what the heart wants is impossible. It’s not in my father’s nature to apologize for anything he’s done, wrong or right. He’s not the one to make amends – his whole life, others have come to him with their heads hung low, arms at their sides, hoping for a second chance. Dad doesn’t accept any judgment but his own. After all, what kind of court would life be if everyone was allowed the privileged position of judge? There would be no way to tell wrong from right, accused from accuser, prisoner from guard. In that way, we are the same – my father and I will always refute all decisions save our own.

Lear gives me hope (even if it’s false hope) that things will change, that before he dies, Dad will call me and tell me he loves me, that he’s proud of me, that he’s sorry for being such a terrible person. And, misleading or not, that’s what I’m stuck with at the end of the day, here, by myself in the city at the end of the world, with no fools to play fool with, no dogs to kick, no children to betray me.