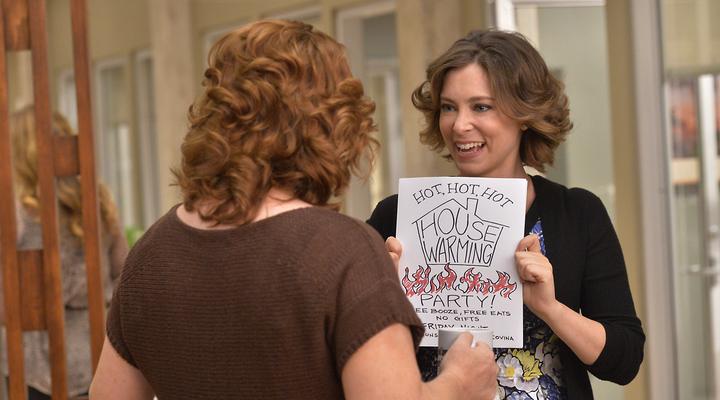 Episodes two and three of Crazy Ex-Girlfriend “Josh’s Girlfriend is Really Cool” and “I Hope Josh Comes To My Party!” were pretty funny. Obviously, from the titles, they were about Rebecca meeting Josh’s girlfriend Valencia and throwing a party.

In the second episode, Rebecca meets Josh’s girlfriend Valencia, and immediately obsesses over her. She tries to convince herself and Paula that she really does like Valencia, but Paula can see right through that. Anyway, Rebecca winds up showing up at Valencia’s yoga classes, offers to help Valencia find her own yoga studio, and the two quickly become BFFs. Rebecca even copies Valencia’s style.

But it all comes crashing down when Rebecca, Valencia, Josh and Greg go to Spiders (or Spiders’ or Spider’s. It’s not so clear). Rebecca gets super drunk and tries to make out with Valencia. Then she drunkenly reveals that she and Josh dated. Valencia gets super jealous and freaks out and forbids Josh from seeing Rebecca again, so they sneak away to a restaurant 45 minutes away.

In the third episode, Rebecca decides to face her fears and throw a house warming party. Rebecca’s been scared of parties ever since her childhood when only a few people showed up and then her dad left her forever. But she decides to face her fears and throw the party. Except, no one shows up again. Josh shows up, though, and helps her throw the party she’s always wanted.

I especially liked “I Hope Josh Comes To My Party!” because we got to see more from the other characters. Not that I don’t like Rebecca, she’s the main character and is hilarious. But I like to see more character development. And we’ve really been getting to know Paula lately.

I also liked the third episode because it had a fantastic song in it. I was worried how they’d be able to keep churning out songs that worked for this show. But the “I Definitely Have Friends” song was just perfect.

While I know it’s called “Crazy Ex Girlfriend,” it’s pretty obvious that Rebecca and Greg will get together. The one thing I really hope is that they get to that sooner rather than later. Or that they have Rebecca just get over Josh and be by herself for a while. But overall, I’m finding “Crazy Ex Girlfriend” really entertaining.