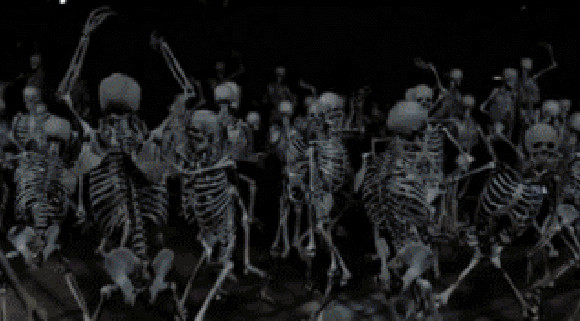 You’re a cool kid. You’ve got a rad costume, a killer apartment with a bottle opener attached to the wall, and at least 8 friends. So, naturally, you’re going to throw a Halloween party, right? Well, to do that you’re going to need a playlist as spooky as the fake eyeballs in the punch bowl. To get your your braaaaaain juices flowing, here are my Top 10 spooky songs to play at your totally kickin’ Halloween bash.

10. “I Put a Spell On You” (Screamin’ Jay Hawkins)
#90skidsremember that excellent 1993 piece of Disney wonder Hocus Pocus wherein Bette Midler gave an impressive rendition of this 1956 classic by Screamin’ Jay Hawkins. In fact, I’m linking that version here for your listening/ripping/viewing pleasure. You’re welcome. (If you can’t get enough of this song, also check out Nina Simone’s awesome cover.)

9. “Bad Moon Rising” (Creedence Clearwater Revival)
Let’s face it, the Louisiana bayou can be kinda creepy. Did anyone else see that Kate Hudson film The Skeleton Key, or the Scooby Doo movie where they investigated the bayou monster pirate thing? Anyway, you can’t go wrong with CCW and their thoroughly eerie N’awlins folk-rock.

8. “Werewolves of London” (Warren Zevon)
Warren Zevon says he “saw a werewolf with a Chinese menu in his hand.” They like Chinese food too! Isn’t that spooky?! Now, don’t be alarmed if the background riff of this song reminds you of a recent Kid Rock hit that will go unnamed. This is the original, and better, version.

7. “Hell’s Bells” (AC/DC)
AC/DC knows a thing or two about that warm place downstairs. From “Highway to Hell”, to “Hell’s Not a Bad Place to Be” to this classic, they’ve pretty much got the ol’ fire pit covered. And what’s more typical Halloween than boys and girls of all ages dressed as various versions of Satan himself?

6. “(Don’t Fear) the Reaper” (Blue Oyster Cult)
If your party is really going to rock, you’ve got to include this little number. This diddy is sure to get all the werewolves, Frankensteins (It’s Franken-SCHTEEN!), and “Netflix and chill”s on the dance floor.

5. “Monster Mash” (Bobby “Boris” Pickett)
Yeah, it’s cheesy, but come on. There’s a reason this is the song that’s built into every motion-activated porch decoration. You can’t have a Halloween party without “Monster Mash”.

4. “Monster” (Kanye West feat. Nikki Minaj)
I have a confession to make: I sort of like Kanye West. There, I said it. This whole album rocks (My Beautiful Dark Twisted Fantasy…is there a more Kanye title?), but this track makes being a monster sound totally cool.

3. “Spooky Scary Skeletons – Remix” (The Living Tombstone)
This is an old song with many dance remixes made over the years, but this is the one I recommend. Thoroughly spooky for Halloween!

1. “Thriller” (Michael Jackson)
I don’t think I really need to justify having this song on the list. No Halloween playlist would be complete without the King of Pop. For Pete’s sake, this song has its own dance. If you’re hosting a Halloween party, make sure this song makes it into the lineup.

Honorable Mentions
“This is Halloween” (The Nightmare Before Christmas), “Time Warp” (The Rocky Horror Picture Show)

For a compendium of all these creepy Halloween tunes, follow my playlist on Spotify!