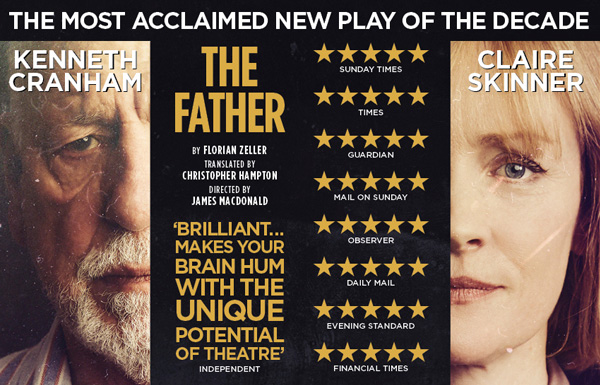 The Father at Wyndham’s Theatre, London

Winner of the 2014 Moliere Award for Best Play (France’s highest theatrical honour), Florian Zeller’s The Father is an open, distressing, often humorous but also deeply tragic new play currently showing at Wyndham’s Theatre. Revolving around the lives of Andre, an elderly man with dementia, his carer daughter, Anne, and her family, The Father is a frank look at the confusing world of a dementia sufferer through their own eyes. In so doing, it presents a series of distorted and jumbled scenes which questions the viewer’s very grip of what is reality and what is fiction. One might think, at first glance, that this all feels terribly heavy and dark, except that it really isn’t. Injected with humorous tones, a gripping plot and augmented by outstanding performances, The Father is a fascinating and harrowing look at the difficult topic of dementia, which leaves you pondering it long after the curtains close.

A charming but at times difficult man, Andre lives with his daughter, Anne, who explains to him that she will shortly be moving to London with her husband, Antoine. Or is it Pierre? What follows is a chronologically unclear and sometimes difficult to follow story where everything is not as it seems. Utilising repeated dialogue and changing actors, we see the befuddling turn of events through Andre’s eyes, as he is confronted with apparent strangers drifting in and out of his apartment and characters whose personalities and motivations are not always clear. Scenes are conjoined by music distorted as if skipping on a record player and flashing fluorescent lights, alluding to what might be construed as breakdowns in memory or even the cold artificial lights of a mental health institution. While a little grating later on in the play, these mechanics are effective instruments in following Andre’s deterioration and the tragedy that accompanies it; a testament to the well-managed direction by James Macdonald.

All the frustrations, fears and sorrow involved in caring for an ill and elderly father are excellently portrayed by Claire Skinner. Suitably unsympathetic at times, the audience can nonetheless relate to the difficulties of juggling the care for a relative with a spouse and work life. The inversion of the parent-child relationship is particularly difficult to watch and handled with a mix of visible emotion and concern by Skinner, portraying a daughter put in a seemingly impossible bind. Kenneth Cranham similarly gives a mesmerising and masterful performance as Andre, keeping the character honest and relatable but nonetheless flawed and even frustrating at times. Cranham‘s delivery draws the audience in, presenting someone who is relatable in the alienation and isolation he feels as we watch events unfold from his perspective.

The few downsides to this play lie in the sometimes unrealistic scenes in which, despite the distorted portrayal, characters have discussions which are protracted or otherwise typical of scenes only found in theatre. This detracts a little from the plot. In addition, the convolutedness of the story might be a deterrent to someone who enjoys a linear narrative, with no real discernible ending and many plot points which are merely hinted at, such as Andre’s potential abuse.

Nevertheless, The Father is a thoughtful and intriguing play marked by brilliant performances and a terrific insight into dementia. Indeed, the tragedy of someone who is slowly deteriorating into brokenness is particularly poignant as we ponder an awful disease that may affect anyone from our loved ones to even our future selves.

The Father is currently showing at Wyndham’s Theatre. Bookings are available until 21 November 2015