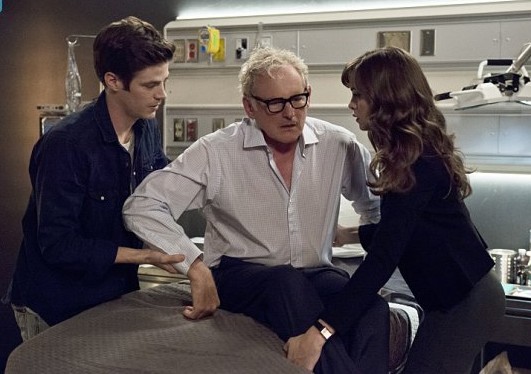 Flash: The Fast and “the Fury of Firestorm”

The Flash is part of a larger DC television universe. Historically, this has worked to its advantage, with Flash/Arrow crossover episodes being fun adventures, trying new combinations of already known characters to push them out of their comfort zones. In this week’s “The Fury of Firestorm”, the larger TV universe felt like a burden rather than an asset. There was a lot of set-up happening for next year’s Legends of Tomorrow, but as an individual episode, “The Fury of Firestorm” somehow managed to feel both stale and rushed, and all together unsatisfying.

The main plot revolved around finding someone to be the second half of Firestorm, after Ronnie’s death in the season opener. Without a partner, Dr. Stein would die. Luckily, the team found two potential matches: Hewitt and Jax. Hewitt was eager to become a superhero, Jax, less so. Choosing between the two candidates brought out a really ugly, elitist side of Caitlin, with her insisting Hewitt was the perfect fit because he is a scientist and obviously was doing something with his life, while Jax, who didn’t go to college, despite having the grades for it, was the less desirable choice. A couple of things…1) Jax lost any potential football scholarships due to an injury…have you see how much college tuition costs, Caitlin? Have you? There’s nothing wrong with having a solid job fixing cars. Just because someone’s priorities and ambitions are different than Caitlin’s doesn’t give her the right to call them a quitter. 2) Hewitt was clearly evil. Seriously, if Caitlin, even with all her advanced degrees couldn’t tell there was something off about him, then she’s not as smart as she thinks she is.*

Unfortunately, Caitlin is turning out to be a big problem with season 2. The way she is handling her grief at her husband’s death is inconsistent. One minute, she’s flirting with Jay, the Flash from Earth 2, going as far as to convince him to stay on her Earth and not go back to his home. The next minute, she’s being downright nasty to Jax because of he might replace Ronnie. Of course Caitlin is sensitive to Ronnie being replaced as a part of Firestorm, but she wasn’t being a heartbroken widow, she was being cruel. It’s too bad that the supportive Caitlin from Season 1 seems to have vanished. In Season 1, she was grieving, but she was still functioning. Season 2 Caitlin is a mess. She started to slowly move on. But then after two episodes of her making heart eyes at Jay, she was suddenly lashing out because of her grief.

People process grief differently, but one of the benefits of Season 2 picking up six months after the Season 1 is that everyone’s pain would be less raw. Not only that, but the way Caitlin is processing Ronnie’s death isn’t consistent with the way we’ve seen Caitlin process traumatic events in the past. Could she be having an emotional breakdown? Sure. But it’s coming across less like Caitlin having a breakdown and more like Caitlin catering to the whims of the writers in ways that aren’t true to her character. There’s a difference.

While Season 2 hasn’t been kind to Caitlin so far, Iris has grown a lot. I didn’t have strong feelings for Iris either way in Season 1. She had some cool moments, but other times she was bland, or annoying. It’s not her fault – it’s a trap a lot of Main Character Love Interests fall into. And poor Iris- she was a Main Character Love Interest  who was also a Superhero Love Interest, so a lot of times she had to be dumbed down so Barry could keep his identity a secret. Season 2 Iris has come a long way. She’s doing her own thing, and kicking ass. Not to mention seeing Iris and Barry be best friends is a million times more fun than watching him pine after her. (Seriously, Barry, let it go, and date Patty. She seems cool.)

That being said, I’m not sold on the plot with Iris’s mother. It’s a lot happening, really, really fast. “Hi I’m not dead, but I am dying, and by the way, you have a brother.” Okay, so that’s not how it went down verbatim, but I’m still getting plot whiplash from just trying to keep up with the Wests. There are some good moments of Iris and Joe protecting each other and bonding. And if internet rumors are correct, there is a reason for this mess of a plotline, but that’s not good enough. Even if there’s a reveal later down the line, that doesn’t change the fact that the execution in this specific episode felt rushed and could have been handled better.

The same could be said for Firestorm. Jax and Dr. Stein flew away in the end to go “train”. It felt a lot like when Ronnie and Dr. Stein flew away in Season 1. Between that and another monster of the week going after Barry at Zoom’s behest, this episode wasn’t getting any points for originality. Of course, Jax and Dr. Stein didn’t just fly away to train- they flew away because they’re going to be on the spinoff series, Legends of Tomorrow. Which, while I’m excited for, I don’t appreciate The Flash phoning it in for an episode. Yeah, there was a giant shark man at the end of the episode, but that doesn’t erase the fact that the other 95% of the episode was uninspired.

The previous episode “Family of Rogues” handled this spinoff business much better. It was an entertaining episode on its own. In the end, Leonard Snart was in jail, but warned Barry he wouldn’t be there for long, while Barry insisted Snart had good in him and could one day be a hero. Hmm. If only Snart was going to be recruited onto a team of heroes and villains to help save the universe, and oh, wait, isn’t that what the Legends of Tomorrow is going to be about? While that conversation between Barry and Snart was obvious foreshadowing, it also worked within in the context of the episode and was true to the characters.

There is one thing Season 2 is repeating from Season 1 that I don’t mind at all: having Harrison Wells dramatically close out an episode. Tom Cavanagh is such an integral part to the show, so even though now he’s playing Harrison Wells, not Eobard Thawne (or so he claims), his return is a welcome one. Okay, so he wasn’t gone that long – but video recordings and a quick appearance on Earth 2 aren’t the same as him being back in Central City and interacting with the STAR Labs team. Cavanagh is consistently sinister and charming, so it’ll be great to see him work his magic.

“The Fury of Firestorm” wasn’t the strongest episode of The Flash, but it had its moments, and Season 2 has a lot of potential. Jax is a fun new addition to the DC TV universe, whatever show he ends up on. Jay is a solid character, even if his hat is ridiculous. (I don’t care if that’s what it was like in the comics, it’s still ridiculous.) It’ll be interesting to watch Barry’s relationship with another speedster. Wells is back, Zoom is an intriguing, menacing force. Cisco has creepy powers. All the ingredients for a great season are there, it just needs a little fine tuning.

*For goodness’ sake, he killed that dude and turned him into a cello in the first season of Hannibal. Keep up Caitlin, geez.