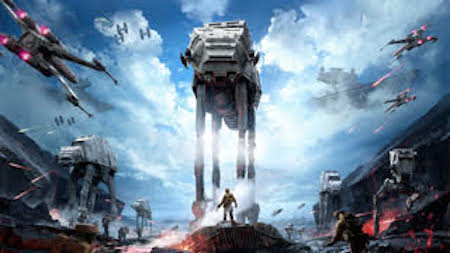 When I first heard that Star Wars: Battlefront II, possibly one of the most enjoyable and accomplished battlefield-games of the PS2/Xbox generation, was getting a reboot, I was both hugely excited and anxious at the same time. You see, when grappling with such a beloved franchise, every effort must be made to try and reach, or at least nearly reach, the hyped expectations that are made of you. However, rarely is this achieved; the hype is often entirely insurmountable. In the Battlefront case, expectations and fears were raised in equal measure by Battlefield developer DICE and (*shudders*)  EA’s involvement. On the one hand, having a developer like DICE (with all its multiplayer prowess) could be the key ingredient for a winning formula. However, it could just as easily become just another Battlefield clone with a different skin, with poor server support (*cough* Battlefield 4 *cough*) and riddled with micro-transactions. ‘Please don’t screw this up, EA’, we all prayed, with memories of Sim City and the mediocre Battlefield: Hardline still burned into our collective psyche.  With the open beta having been running now for a few days and recently ended, we all have had the chance to sample what DICE has come up with and, with early-access conditions in mind, make an initial assessment. So, is it good?

Firing up the beta, the rather bland and unimpressive menu is an uninspiring first step. But hey, it’s a beta right? I’m sure they’ve got a nifty, fancy menu lined up for launch. I’ll let that slide. Jumping into a ‘drop zone’ game, I’m first excited by the orchestral John Williams score setting the fantastical scene; a welcome touch. Dropped onto the previously unseen world of ‘Sullust’, the objective, in a rather ‘king of the hill’ and Battlefield-like fashion, is to secure some escape pods. Righto. After a few minutes of playing, I was having a fair bit of fun. The ‘pew pew’ and authentic-sounding laser rifles and fast respawns made everything sound and feel rather legitimate, and it was certainly fun to crush those rebel scum as the narrator informs me that Lord Vader will be most pleased with my work. Sadly, there wasn’t much variety to play around with. On starting, you are stuck with a default loadout of a couple of fairly similar guns, with no classes to speak of nor even a grenade; you have to unlock that. Wait, I have to unlock a grenade? Well, that’s no fun. The game instead relies on you collecting ‘cards’ which you can use to amend your loadout. This seems rather a bad move, since the class-system was arguably one of the best features of Battlefront II; it seems strange to completely abandon it. At least give me a rubbish grenade that I can upgrade? Leaving something out and demanding you play more to unlock it just feels like a kind of cheating.

Growing increasingly tiresome of the small and only available drop-zone map, my focus turned to the much more exciting-sounding ‘Walker Assault’ map; a 20v20 melee. ‘Now this is what I’m talking about’ I thought, though in a more abstract way. ‘Are you sure?’, the game asked, ‘you might want to level up a bit first’. To heck with you, you, game, I replied. I don’t need your approval to play what is essentially half the game at this point. So, I loaded it up. Though first impressed by the vast landscape, monolithic AT-ATs and vast amount of carnage going on, I slowly realised that this game was horribly unbalanced and we rebels had little chance of surviving the imperial onslaught. For one, the AT-AT’s are pretty much impregnable, apart from at certain points when you are instructed to focus all your firepower onto it; this depended on you securing certain outposts. However, it appeared not everyone got the memo. Many of my fellow rebels paid no heed to the giant metallic camel slowly advancing towards us and it wasn’t long until it was impregnable again. What’s more, the ‘power up’ system means you have to randomly find a glowing symbol somewhere on the map to be rewarded with a vehicle. This also seems misguided- fighting for vehicles and driving them around the map is quintessentially Battlefront, removing them is a glaring mistake. What’s more, I realised my folly in refusing to level up when I had no real way to attack any vehicles. Generally, then, I was quite disappointed at the limitations that seemed to be in place, even given this isn’t the full game.  A true Battlefront game should be expansive and engaging, with opportunities for the player to feel part of a wider effort. However, the current state of the game just didn’t feel like that. Sadly, it felt rather unremarkable.

While, at times, the game offered the grandeur of a real star wars battle, by and large I felt tremendously underwhelmed. Of course, one has to be reminded that this isn’t the finished game, nor even the whole game itself. There’s still the fighter squadron mode and a number of different maps and modes. Who knows, maybe the tweaked final version will address some of the unbalanced elements, while the full experience may prove to be the Battlefront game we’ve all been waiting for. At the moment, though, I can’t see myself picking up this game excitedly on launch day. Coupled with no campaign mode (a personal irritation, though I understand my misgivings about multiplayer-only games may be primarily due to my horrendous internet connection), the latest Battlefront may prove to be more a Phantom Menace than an Empire Strikes Back.