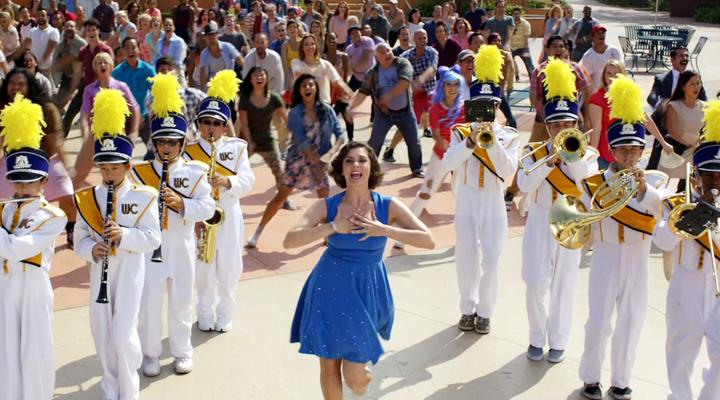 I’m a big sucker for musicals, so I knew I had to check out Crazy Ex-Girlfriend. I was wary going in, though. Would this be one big, predictable joke about irrational, emotional, obsessed, clingy women? Or would Crazy Ex-Girlfriend mock the tired, and offensive stereotype?

I found the pilot “Josh Just Happens to Live Here!” pretty funny. The song “Sexy Getting Ready Song,” was especially funny. At one point a rapper just stops, realizing how terrible it is that women have to do so much to get ready to go out. He says it’s all just an affect of the patriarchy and he has some women to apologize to.

Crazy Ex-Girlfriend starts with a teenaged Rebecca Bunch and her camp boyfriend Josh breaking up at the end of the summer. Rebecca’s just too weird, different and clingy. Rebecca, of course, is crushed.

Fast forward a few years and Rebecca’s followed her mother’s every instruction and has become a highly successful, but highly unhappy New York lawyer. But who does she run into right before she goes into a meeting where she’ll be named junior partner? Her old boyfriend Josh, who’s leaving the city to move back to West Covina, California, which is just two hours from the beach, four in traffic. Rebecca quickly declines the promotion, and heads to the land where dreams are made of.

While Rebecca claims she moved for an awesome job opportunity, she obviously went to stalk Josh. She meets her racist boss and the paralegal Paula as well as Josh’s friend Greg. Paula’s highly suspicious of Rebecca and is determined to find out what her deal is. When she does, she convinces Rebecca she’s not actually crazy. She’s brave for trying to find love. She will, of course, be Rebecca’s best friend now and Rebecca will probably slowly realize that Greg is her real love interest.

I did love the overall feel of Crazy Ex-Girlfriend. It’s happy and cheery and over-the-top on the surface, which is an interesting and stark contrast to some of the darker material.

However, one thing that I’m really interested in seeing is how the show deals with the word “crazy” and actual mental health issues. I’m hoping that it comes up more and that it’s handled in a real, honest way. In the pilot, we heard off-hand remarks about Rebecca’s previous suicide attempt and we saw her get rid of all her meds when she’s broke free of her mom’s plan for her and moved to California.

I’m eager to see if they’ll keep the mental health aspect in the show. I think it would be amazing if they addressed the stigma surrounding mental health and the word “crazy,” but we’ll have to see where this is heading.