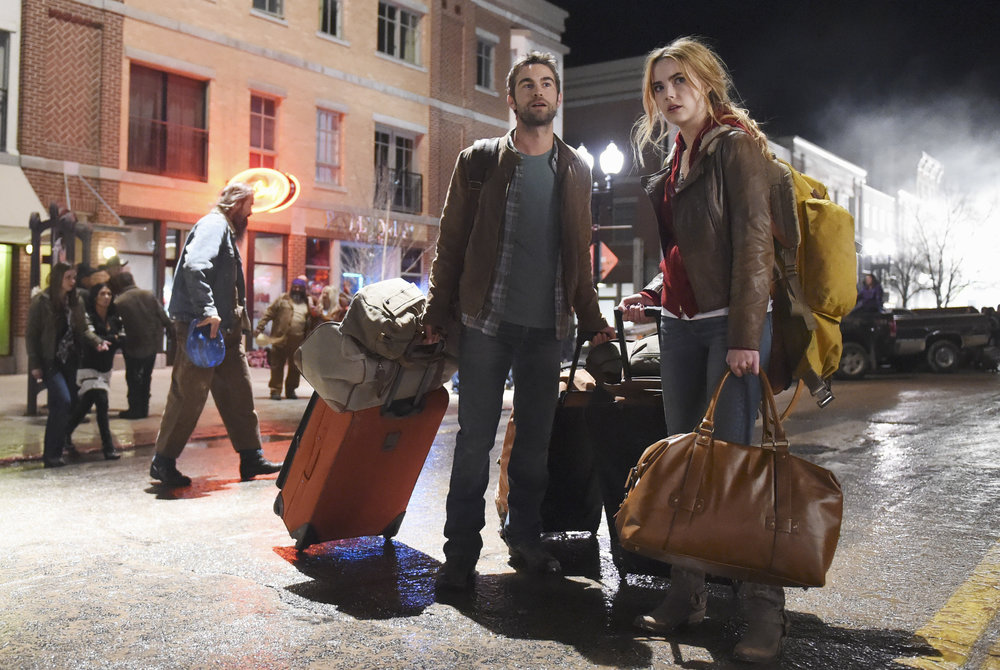 Hot off the viewing of my favorite new pilot of the season, I finished watching my least favorite new pilot. It was no surprise to me that Blood & Oil would be a letdown. A show about oil, money, and North Carolinians (no offense!) just didn’t sound very appealing. That being said, I thoroughly enjoyed the premiere of Nashville even though country music had no interest to me, so I gave it a go.

Immediately, we are thrust into the plot of the episode: Cody and Billy (a young attractive couple) head to North Carolina in the hopes of capitalizing on the booming oil industry. All they have for money is equipment in their truck which is quickly destroyed after a car accident. Their items are flung in what appears to be a mile radius that defies science, and the main couple is left devastated since their equipment wasn’t insured (conveniently).

The couple finds themselves in a small yet upcoming oil town. We are quickly introduced to Wick Briggs, the apparent villain, who kills a white moose and the local natives hate him for it. Meanwhile, our main couple meets a nice couple who offer them some food and drink and simply ask them to pay it forward. In a cheesy voiceover, Cody says, “just when I’ve lost all faith in humanity, you meet someone special.” Thank you for clarifying that we just met the amoral and moral characters.

Later we meet Hap Briggs (Wick’s father) who is a big oil tycoon. When Billy has his first day at Hap’s company, Wick backs his truck into some oil supplies and costs his father some money in damages (I don’t understand any of this since I don’t know how oil works). Billy is fired for being involved in the incident and Wick is disowned from his father’s company and estate. “You don’t deserve to be my son,” says Hap in an extraordinary display of acting (sense the sarcasm). Meanwhile, I’m playing Candy Crush which is about 100,000 times more exciting than this episode…except when Chace Crawford smiles because nothing is better to look at than Chace Crawford smiling.

Meanwhile Cody, who continues to complain of stomach aches and is so clearly pregnant (we find out later that “surprise” she is), gets a job at a pharmacy and overhears about McCutchen ranch from some dude who is flirting with her. Apparently the ranch is key to oil access. She tells Billy who then investigates and realizes there’s only one way into the ranch and it’s through one man’s property. After a series of negotiations, Billy has to come up with a bunch of money and the guy agrees to sell his land to Billy over the Briggs because they have screwed him over in the past. In this magical word, money grows on trees, so Billy is able to procure the money and steals the land from the Briggs’. He then makes a deal to essentially become Hap’s partner and earns a cool million. Then Billy and Cody do what any poor turned-recently-reach couple would do and give away 50K to the “nice couple” they met in the beginning to invest in their restaurant.

At episode’s end, Wick is stealing oil from his dad. Hap shows up with his new business party Billy and their wives but quickly realizes someone is stealing. Wick comes out, wearing a mask, and points a gun at his father. Billy jumps on wick and the three begin fighting. The gun goes off, hits a light, and a spark plummets to the ground. The spark hits the oil which the three men are standing on and the oil goes up in flames. One can only hope that the Briggs’ will both die and Billy will go on to meet new, more exciting characters who will help prevent this series from cancellation. Dare to dream big…hey, it worked for Billy.