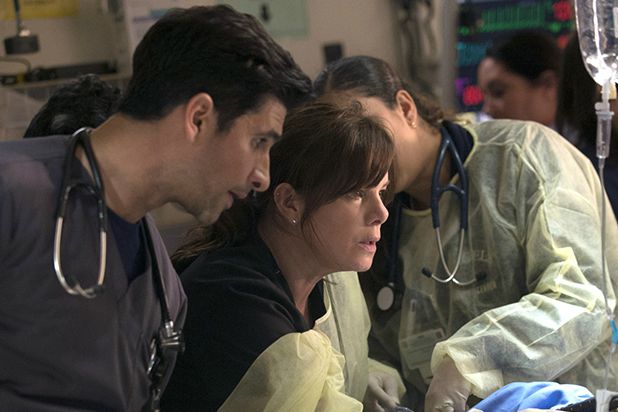 Code Black begins with a definition of the title and an explanation of the setting. Code black is a term for an influx of patients so great, there aren’t enough resources to treat them. While the average ER is in code black 5 times a year, Angels Memorial Hospital in LA (our setting) is in code black 300 times a year. If this sounds at all familiar it’s because you’ve likely seen the previews. In fact, if the entire premiere seems familiar it’s because they spoiled everything in the previews.

Basically, we’re introduced to four residents who are starting their first day at Angels Memorial (Christa, Mario, Malaya, and Angus). The group is led by their resident doctor Dr. Leanne Rorish (Marcia Gay Harden in a not-surprising strong role) and the main nurse Jesse Salinger (picture the male version of Bailey from Grey’s with a bit less intensity and more TLC). The other all-star doctor is Dr. Neal Hudson (who I recognize from Smash!). The only other character of note so far is Dr. Taylor who seems to oversee the hospital but spends his time on the phone and telling people once rooms are ready. Dr. Taylor is probably my favorite character so far due to his deadpan sarcasm (although Kevin Dunn plays Taylor as the exact same character he plays on Veep).

There isn’t much to say about the first two episodes of Code Black. The pace of the plots goes about as quickly as the doctor’s running around the hospital. This results in several “patient of the week” subplots with minimal character development that leaves the viewer wondering why we care. Case in point: our first episode’s most notable patients are a young girl and her brain-dead father and a pregnant lady. The young girl learns about her father’s death and tries, unsuccessfully, to forbid the hospital from harvesting his organs. There’s an attempt at connecting this storyline to some bigger relationship study between Dr. Rorish and Dr. Hudson but it falls flat. Meanwhile, Christa is fired after ordering a tox screen on the pregnant patient. Everyone else thinks the girl is here due to drug withdrawal but Christa isn’t so sure. After she gets fired for insubordination, she realizes the girl has carbon monoxide poisoning and is able to deliver an emergency C-section. Again, we don’t really see the point of this patient’s story other than to establish Christa as a pretty good resident. Maybe I’m being too harsh? Maybe I really like the format of Grey’s and ER where the patients are as important to the story as their doctors (I do). I could be OK with Code Black focusing on the caregivers instead, but they spend the entire second episode focusing on the theme that Christa and Dr. Rorish are here because they care about the patients. Don’t make that a theme if you don’t deliver!

Throughout the first few episodes we also learn that Christa had a son who died which is why she is joining the medical field so late in life. Dr. Rorish confides in her that she’s lost “everyone.” We don’t know much about what that means, but I assume we’ll find out in time.

I really wanted to like Code Black. I love a good medical drama and Marcia Gay Harden is amazing. She certainly leads a strong cast, but I’m not sure the acting chops are enough to keep this freshman series afloat.