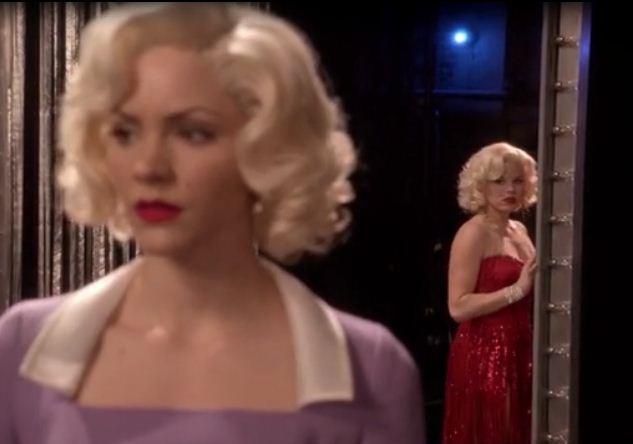 The trajectory of NBC’s would-be hit Smash has been a little wonky. The buzz was incredible, the previews wondrous, the pilot acceptible and the following couple episodes really truly promising. After those initial episodes, I was high on Smash. Obviously, the show had its problems, but there were lots of promising stories on the horizon, the cast was holding up and Marc Shaiman was serving up just as many great songs (“Mr. and Mrs. Smith”, “Lexington and 52nd St.”) as terrible ones (“Howl”, “Let’s Be Bad”).

Heading further into the season, the show’s biggest problem was pacing, as it often is with character dramas that don’t have missions and cases and whatnot. Stories that should have been arcs, playing out over a full season or more, were sped up to fully play out in 2 or 3 episodes with consequences that then played in the background for the rest of the season.

Obviously, if stories like Michael and Julia’s affair moved on the timeline that I wish they had, the show’s plotting would have been much tougher (because, you know, something has to happen in each episode, that’s the hard part). But if they had taken their time and worked out smaller stories to be the main action of each episode, Michael and Julia would have been a complicated, relatable, slow-burn conflict instead of high melodrama that seemed more trivial than it was. Because we got almost no time to get to know him, any time Michael even talked to Julia he seems almost predatory (‘YOU ARE RUINING MY LIFE!’ being her not-so-subtle mantra), which, if we’d seen lots of longing looks and determined abstinance followed by an affair that was long enough to actually examine some feelings, I’m convinced wouldn’t be the case. With saintly Frank in the mix (who I like, he’s just a little too victimized right now), there’s no way there’ll be lots of great Michael territory to explore next year, meaning that the show’s largely wasted the amazing Will Chase (also horrifically wasted: Norbert Leo Butz, one of the greatest Broadway performers of all time whose cameo was so short I was devastated). Neither Frank nor Michael is slated to be a regular next season, so who knows where they’re taking Julia from here. (Also gone for season 2: Ellis- Yay!; Dev- Predictable from the pilot).

The one really interesting thing to come out of rushing the Michael/Julia story was that it was able to drive a major wedge between Julia and Tom when the show-within-the-show needed Michael back. Why anyone had agreed to go along with her selfish and ridiculous plan to fire Michael in the first place is beyond me but it wasn’t long before Derek, Eilene and co. knew they needed him back and Tom, being all big-picture-y, sided with them (because that was Obviously the right thing to do). Tom and Julia are by far the most compelling relationship on the show and Debra Messing and Christian Borle are consistently fantastic in the roles. They have such loving chemistry that the heartbreaking throwdown wherein Julia accused Tom of abandoning her had serious gravitas, instead of falling into the trap of so much Smash action- melodrama! It was completley unfair of Julia to blame Tom like that and it was simulatenously harsh for Tom to abandon their “us against the world”- deal like he did. It was complicated and understandable and heartbreaking and kind of awesome. I’m always saying that friendship stories are horribly underserved on television so the emphasis placed on the Julia-Tom dynamic is incredibly refreshing.

As for everyone else. I like when they hint that Derek might secretly be a great guy, but then he’s just such a ho-bag I can’t deal with him (does he have to whisper all his notes closely in Karen’s ear? really?!). He’s got such character potential, and every once in awhile he even has a line or two that shows that off. Eilene’s been pretty boring (but she is the producer, she was always going to be the boring one next to a cast of artists), though I like when she puts her foot down. The fact that she finally, without hesitation, canned Ellis made me want to cheer out loud. Tom and Sam’s relationship his hella cute so I’ll get over the unceremonious dumping of the cute Republican. I’m hoping, like Sam, the other dancers will get more and more material next year because I’m loving them (especially Wesley Taylor’s Bobby); maybe we can give Alex Wong a speaking part next year!

Now, on to the leading ladies. The producers seem downright determined that Katharine McPhee is to be their leading lady, which literally anyone who has ever seen the show knows is stupid. They keep giving Derek dumb lines like “I see her” to explain why she could possibly EVER be cast to play Marilyn Monroe over Ivy, who is the walking embodiment of that part (to annyong degrees, actually, do we Have to give her mommy issues and pill addiction? Can’t we pick just one?). Watching the season-ending performance of Bombshell, McPhee clearly nails that final song, but not as well as Megan Hilty could have, and she looks like a little boy in costumes she doesn’t come close to filling out. It makes no sense at all to keep pushing Karen up to the top of the heap. If the Smash producers are at all interested in telling real stories, they’ll let the Bombshell producers bring Ivy back. Because, for every possible reason, this should be Megan Hilty’s show. The Dev stuff was silly (though I’m shocked he made it this far into the series, I thought he’d be gone in the first few episodes) but I do appreciate that Ivy reacts like a wonderfully flawed, petulant, defensive human being instead of a TV ideal. Like Julia, Ivy is all the more interesting when she’s unlikable. Now if only we could find a way to make Karen into more than a boob-less nice-girl Barbie.

The finale changed the opening credit music (from the sound of an orchestra warming up to the opening strains of the Bombshell overture) and I really wish it would change back for next season. But otherwise, right down to how well-written that final song was, the Smash finale reminded me why I loved Smash in the first place. It really reflects the human craziness it’s portraying (ain’t nobody crazier than them musical folk) and has the occasional moment of incredible beauty (I’ve listened to “Second Hand White Baby Grand” dozens of times now and am still floored by how great realMarc/fakeTom are as composers). A few tweaks here and there and Smash is a show that deserves to survive long enough to see the team make a musical out of subject matter less trodden than Marilyn.

PS: kudos to NBC on having the patience and faith to let Smash really get its footing. It’s early season 2 order gave me the room to really invest without risking immediate heartbreak.

PPS: I was shocked, but I kind of really enjoyed the Bollywood number. Strong melody, good choreo, and Dev sang! Now if only Frank had sung a bit more (and Tom and Julia, really all the singers in the cast who aren’t Karen and Ivy need more singing time… but only if it works into the story. Please, god, no more random pop covers!)

PPPS: Does anyone else Really want Nick Jonas to come on as a series regular next year? His character is a refreshing dose of agenda-less good guy.