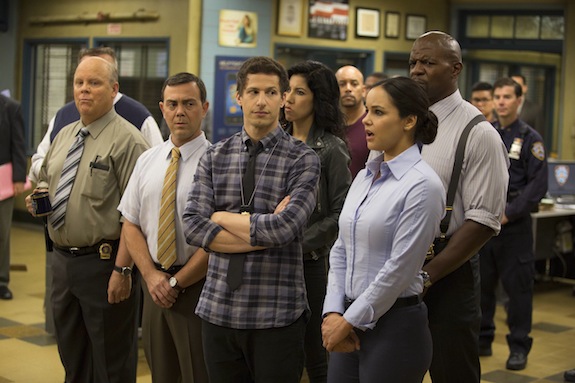 Back to the Nine-Nine

After a strong second season, Brooklyn Nine Nine is back – to a disappointingly uneven start. Despite a lot of good individual scenes or one-liners, the episode overall felt unfocused and rushed. (A few light spoilers ahead).

Last season, Holt was reassigned to the NYPD’s PR department, and Gina volunteered to go with him. Watching them transition to their new office could have been one of the weaker moments of the episode – after all, a lot of shows struggle with such drastic changes. But it was actually the best storyline of the episode. Holt’s feud with his archenemy, Madeline Wuntch brings out the pettiness of two otherwise stoic, professionals. Wuntch assigned Holt to PR to break his spirit, and so his first official job is to name NYPD’s horrifying pigeon mascot. Not only did this result with absurd moments like Wuntch screaming at Holt, “Name the pigeon. That’s an order!”, but it also slipped in some nice moments between Gina and Holt. Gina and Holt’s relationship is one of the most interesting ones in the show. On the surface, it shouldn’t work. Gina is loud and outrageous, and Holt is very straight-laced. But their relationship has grown over the past two years, that of course Gina would follow Holt to PR. And of course she would stand up to her boss by telling Wuntch, “This man is a Timberlake and you need to stop treating him like a Fatone”. That’s the kind of friendship and support everyone should hope to have in their life.

No, Holt, Gina, and the PR storyline are doing great. It’s the precinct that’s having problems. Things started out with guest-star Bill Hader’s Seth Dozerman arriving and introducing himself as the new captain. Dozerman just…didn’t work as a character. His obsession with efficiency and numbers made him seem like a crazier, more cartoonish Holt. He might work in a sketch, but not so much in the show. It felt like Dozerman was brought in because they needed a new captain for one episode, before bringing in another guest star to head the precinct, and not because they actually had a good idea for a character. The very talented Hader should be a good fit for the usually stronger Brooklyn Nine Nine, so it’s a shame he didn’t have a better part. He made the best of an awkwardly written character, but there was only so much he could do with his rushed storyline.

A good portion of the episode was dedicated to Jake and Amy figuring out their relationship. They wanted to try and keep things light and breezy, which predictably failed. If you’re like me, and not very invested in Jake and Amy as a couple, this major storyline was a little boring. It’s not that I have anything against Jake and Amy- I am completely neutral. They could just have plausibly remained friends, with a teasing, almost siblingish relationship, and that would have been entirely believable and fine. There’s no burning sexual tension there. It’s been brought up a few times that Jake likes Amy, then when he is declined, he moves on, business proceeds as usual, only for his feelings to become a thing again around season finale time. (Jake’s feelings for Amy was a huge storyline in both season finales so far). If you don’t possess Boyle-levels of enthusiasm for Jake/Amy, their romantic subplot is a diversion from the more interesting workplace drama. Jake/Amy isn’t the next great TV romance. It’s fine in small doses, but shouldn’t become a focus of the show.

Overall, this wasn’t one of the show’s stronger episodes. Brooklyn Nine Nine is capable of a lot more. As this episode proves, it’s at its strongest when it’s a workplace comedy focusing on the relationships between co-workers and friends, rather than on the romantic aspects.