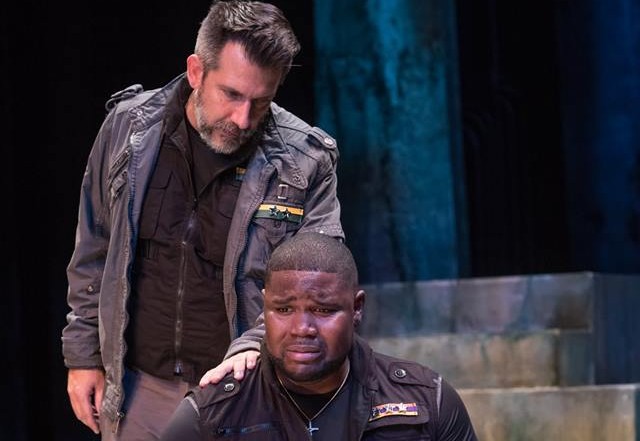 How the ‘Why’ Can Lead to the ‘Who’: ASP’s Othello

Attending Actors’ Shakespeare Project’s production of Othello, directed by Bridget Kathleen O’Leary, staged at The Modern Theatre at Suffolk University, I focused on John Kuntz’s Iago. He didn’t go for hand-rubbing evil villain; he didn’t laugh maniacally during his many asides to the audience. He wasn’t particularly smooth-talking or violent. In fact, he was mostly a straight-man. Delivering his lines with ease and understanding, there was a quiet doggedness to his Iago I have not seen in any other portrayal. I wasn’t sure what to make of it as I left the theater. But as I mulled it all over, I realized Kuntz’s performance was leading me to consider the play from different angles.

Audiences have taken glee from evil Iagos for so long, the rest of Othello often risks being dwarfed by charismatic comparison. We long to see a delicious baddie lead the goodies to destruction and chaos. So what to make of this inscrutable Iago? What did it say about everyone else in the story, and what they had to contribute?

Take Ross MacDonald’s Cassio. Charming (and a little too boisterous and noodle-limbed for my taste), this Cassio, under the influence, ground the soldiers’ celebration in Cyprus to an ungainly halt. While we know Iago is conspiring against Cassio to put him out of favor with Othello by plying him with too much drink, for the first time I thought: Does that make the lieutenant’s behavior any more excusable? Regardless of the fact that he was set up, there is no doubt that Cassio is a belligerent and ugly drunk. Is this a soldier who should be Othello’s right-hand man?

Or take Rodrigo (Bari Robinson). He is a foolish fop who is manipulated by Iago to spend multiple bags of gold in a fruitless attempt to woo Desdemona. Regardless of Iago’s puppet-mastering, what do we make of Rodrigo’s fervor to woo a married woman and to murder a seeming suitor to obtain his desires? How much prodding does Iago need to do to lead Rodrigo to his ignoble death far from home?

What about Emilia (wonderfully played by Jennie Israel)? No one cares more for Desdemona’s wellbeing. Emilia dies exposing Othello’s murder and Iago’s treachery, and proclaiming Desdemona’s innocence. But Othello’s fateful deed was facilitated by Emilia’s deliverance of Desdemona’s handkerchief into Iago’s hands. As painful as it is too consider, her contribution to the tragedy, however small, is undeniable. What did she think Iago would do with the handkerchief? Did she really not know the kind of person she was married to? What unspoken motivations and situations led her to contribute her fateful action to the plot?

Even Desdemona (Josephine Elwood) cannot be left out of this reconsideration of the play. While it is ennobling that she chooses to defend Cassio to her lord, her persistence in the matter borders on inappropriate, or at least downright puzzling. Adultery is absurd, for we know Desdemona is chaste. But would that chastity have outlasted the marriage we are seeing disintegrate before us? What weakness in her character or unexpected circumstance could Iago have played on had he wanted to manipulate her further?

Then there is Othello himself. Johnnie McQuarley is all commanding presence and loving husband when he first sets foot on stage. No one could doubt Othello’s military prestige, or fail to be impressed by his calm defense of his elopement to the Duke (Thomas Grenon) and to his unwilling mother-in-law, Brabantia (Israel). But, while only a fool would take anything Iago says completely to heart, the ancient’s accusing words linger as Othello takes the stage. Was Othello wrong to promote Cassio over Iago to be his second-in-command, regardless of Cassio’s charm and good breeding? How much of a free pass do we give Othello for eloping with Desdemona without her parent’s consent? There is no need to question the injustice of Desdemona’s death; but the question of who is really to blame for this tragedy becomes thornier by the minute.

This production, principally fueled by Kuntz and his fellow actors, promises to make the wheels turn in your head as you revisit a story you may think you know well. In the director’s notes, Leary encourages us to consider the circumstances that lead to the “devastating actions” of the play; only “then can we begin to see how the ‘why’ can lead to the ‘who’ and not the other way around.”

I admit I was more taken with the acting and direction than with the staging of this production. Eric Levenson’s set (consisting of minimalistically placed stone blocks, forming a short platform and set of stairs upstage) was appropriately non-specific in location for Cyprus, but seemed arbitrary and out-of-place for Venice. Tyler Kinney’s costuming also felt uncharacteristically nondescript and simplistic for a relatively small cast.

Despite these hiccups, I would recommend going to see this production. Be prepared to see a familiar story warmed into something new.