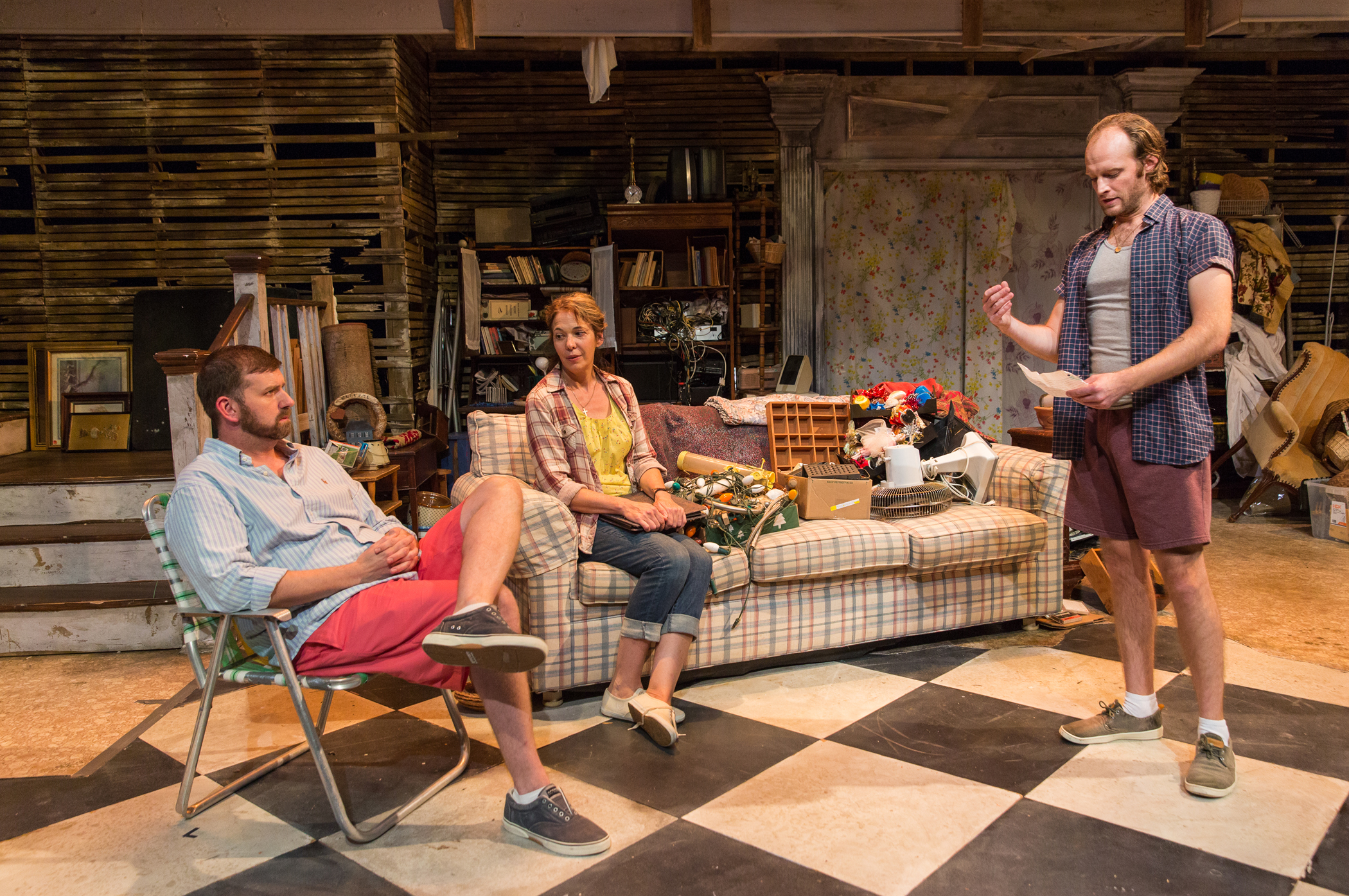 Before the show even started, playwright Branden Jacobs-Jenkins immediately won me over. I was at the BCA, ready to watch a performance of appropriate, the New England premiere of the play and a SpeakEasy Stage Company production directed by M. Bevin O’Gara. In the program notes, Jacobs-Jenkins pointed out how revealing laughter can be as a social human experience: “I’m interested in the experience of an audience who hears one side of the room laughing and the other side of the room not laughing.” These words came back to me when, at intermission, an elderly white woman to my right said: “I like sitting next to you; we have a similar sense of humor!” Apparently, being young and Hispanic was no barrier to my sharing with this woman an appreciation of the very dark humor that infuses appropriate.

If you are looking for prickly, amusing, and stimulating theatre, then this show is for you. Appropriate tells the story of the Lafayette family: the patriarch, quietly tucked away in his decaying plantation home in rural Arkansas, has passed away, and his dispersed children reunite to auction away his belongings and attempt to find closure for their fragmented family lives. Any chance of closure goes up in smoke when the siblings find a disturbing family relic. Centuries of unsifted historic wrongs revive, forcing everyone to come to terms with their own past and legacy.

Toni (Melinda Lopez), the eldest sister, has been holding down the fort for as long as anyone can remember. She has remained close to the homestead, and done her best to keep her father’s affairs in orders despite the disintegration of her own personal and professional life. Tired, bitter, occasionally cruel to whomever dares confront her, she also dearly loves her troubled and distant son, Rhys (Eliott Purcell). Lopez brings a vibrancy to the role, apparent even at Toni’s lowest points. The eldest child soldiers on, despite the fact that she is the only one in the family still clearly grieving her beloved “daddy.”

Toni butts heads constantly with Bo (Bryan T. Donovan), the family success story. He has managed to corral his wife, Rachael (Tamara Hickey), and his children Cassidy (Katie Elinoff) and Ainsley (Brendan O’Brien) in New York, far from the root of his southern upbringing, and recoils from any sense of nostalgia for his childhood. Despite his snobbishness and nasty arguments with Toni, Bo is mindful of what both of his siblings have been through, and attempts (usually through money) to atone for his absence and ameliorate their suffering. iPhone glued to his hand, fussy about finding a place to sit in the messy house so he can whine about the Southern heat, Donovan excellently balances Bo’s priggishness with his hidden reservoirs of sympathy and consideration.

His Jewish wife, Rachael, is an enterprising spirit totally at odds with the Lafayette clan’s murky inability to resolve their issues. While her few speeches felt like the most contrived bits of dialogue in the play, Hickey pushes past them and captures Rachael’s unsavory antagonism and discomfort in vivid and exciting ways. Her confrontation-pendulum swings wildly as she goes toe-to-toe with Toni one minute, then passive-aggressively manipulates her husband the next. Hickey is convincing and entertaining whether she is shouting in someone’s face or standing stiffly and silently in the doorway of a bedroom.

The oddest pair in this story consists of the third sibling and his young girlfriend. Franz, or “Frank,” depending on who you ask (Alex Pollock), has come a long way from a sordid former life Toni refuses to let him forget about. He has managed to reinvent himself with the help of the kind and spiritual River (Ashley Risteen). Hippie-dippy as she looks and sounds, the twenty-three year old River is surprisingly wise and attuned to the feelings of others. Risteen turned what could have been a stock character (the classic outsider in the American family drama) into a dynamic one, an observer not above speaking her own mind when things begin to spiral out of control.

And spiral they do. Jacobs-Jenkins has appropriated the themes, tropes, and thrilling twists of many works in the American dramatic canon and produced a probing critique of American race relations with an entirely white cast. This indirect approach upends the audience expectations, even as we revel in the familiar: in the family estate no one wants to return to, in the revelation of dusty secrets, in the inevitable cathartic brawl, in the devastation the family reunion will leave in its wake). The fact that we are seeing a very American play not penned by a dead white male author forces us to reconsider what we mean when we talk about the Great American Family Drama, be it classic or a work to come.

Without spoiling the plot, it is fair to say that there is no tidy wrap-up in the end. When I left the theater, I mulled over what I saw as the play’s not-altogether-unpleasant inconclusiveness. Although I thought of it as a “problem,” it didn’t mar my enjoyment of the production. But this “unfinished” quality brings us back to the issues the play unpacks, the issues it is grounded in. When we consider the inconclusive nature (past and present) of our national narrative on class, on race, on sexuality, on the right of our various silent oppressed minorities to tell their own story, perhaps it is right that there is also no resolution for the Lafayettes. We are all left with a big question mark: what happens next?

The big ideas this play explores are well served by SpeakEasy’s staging. Cristina Todesco’s scenic design puts the audience right in the creaky and cluttered Lafayette living room, making a proscenium-esque set feel intimate. The ominous racket caused by hordes of cicadas screeching outside the plantation walls is as effective as it is unsettling, rising and falling as it does with the play’s tension (sound design by Arshan Gailus). Tyler Kinney’s costume design completes the disparate picture made by these siblings: the different paths they have chosen are as evident in their appearance as in their speech and their livelihoods (or lack thereof).

SpeakEasy has staged a play that is both intelligent and thrilling to watch. Evocative of the past, experimental and daring, appropriate invites you to step outside your comfort zone and experience American theatre from a new perspective.

SpeakEasy Stage Company’s production of appropriate is playing now through October 10th, 2015, at the Boston Center for the Arts.