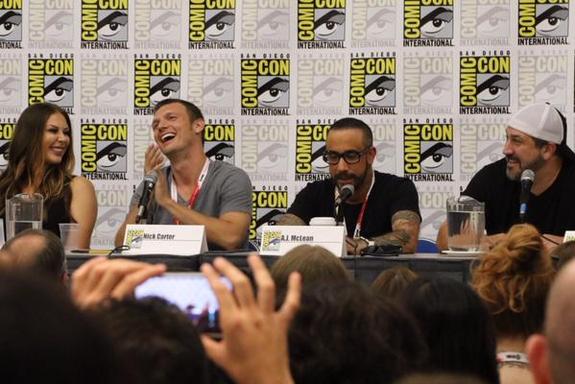 I didn’t have much time for panels at Comic-Con this year. Scheduled to be covering press rooms almost the entire weekend, I made it to a total of two panels, one of which was just the precursor to a far-more-interesting press room on the same subject. The other was “Nick Carter Goes West”.

So much about this panel was really weird- why are the Backstreet Boys at Comic-Con? Why is Joey Fatone with them? Why is a film that is still so early in the planning stages being given such a promotional platform? How insane does a boyband western produced by the Sharknado guys sound? Perhaps most importantly- where is Brian?!

It turns out that Backstreet’s youngest member (now aged 35 after more than 20 years in the band) has been dying to make a zombie western for basically ever. So, now, post-world tour and apparently mid-Dancing with the Stars, he’s finally going to do it. The Asylum is on board to produce (the film will air on Syfy with all their other crazy stuff); Howie D, Mrs. Nick Carter (Lauren Kitt) and mutinous ‘N Sync-er Joey Fatone (who claims they never really had a rivalry, though no one really believes him) will be part of the team of seven heroes who make up the main cast. AJ McLean will play the villain, which is basically the best piece of casting since he played the Phantom of the Opera in the “Backstreet’s Back” music video (in case you haven’t seen it lately, here’s the link; it’s a masterpiece).

Nick Carter (apparently forgetting about the existence of Aaron Carter) reached out to One Direction’s Niall Horan on twitter with an offer to play his little brother in the film but he apparently has gone unanswered. NOTE: Nick didn’t bring this up at the panel, I just thought it was too funny not to mention.

The panelists were charming (especially Joey Fatone who left the stage at one point to hug a girl in the audience who told a story about getting a hug from him at an ‘N Sync concert years ago) and the tone of the hour was refreshingly casual with some fun off-topic banter and plenty of self-deprecating humour mostly courtesy of AJ. Nick seemed nervous and desperate to be taken seriously (I imagine this is a life-long struggle for Nick Carter who is not only a Backstreet Boy but the youngest and blondest and largely considered the cutest Backstreet Boy) but the project really just isn’t fully formed enough to justify this very strange and completely out of place panel.

That said, even without my favourite member (guys, Brian is both the goofy/nice one AND the best singer- that never happens), I love The Backstreet Boys and will always show up for them, even if the place they ask me to show up is an over-crowded, scream-filled convention room where they will be neither singing nor dancing but rather talking about a zombie movie that at this point seems mostly theoretical.