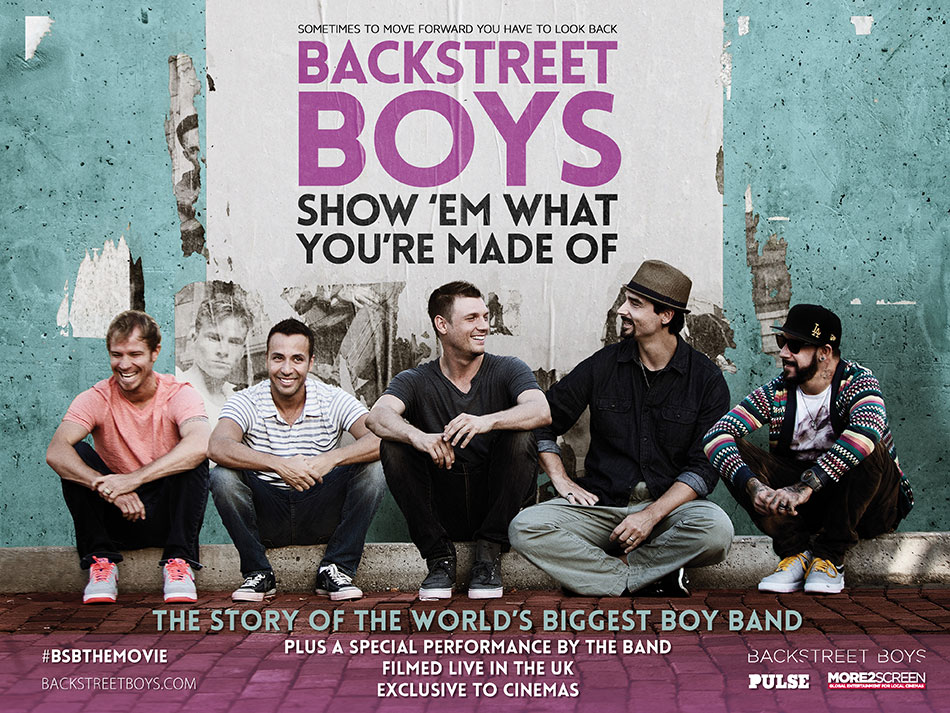 In Reel Life: Show ‘Em What You’re Made Of

I’m not even a little bit embarrassed about seeing the Backstreet Boy documentary. Other than Joshua Jackson and Gilbert Blythe, I’ve loved nothing in my entire life as long or as consistently as I’ve loved the Backstreet Boys. Those opening chords of “As Long As You Love Me” still pull my heartstrings and, yes, I see them every time they come to town (which is often, they tour almost constantly). I was psyched to see this thing that I’d seen promoted at multiple concerts over the last two years, but I wasn’t prepared for director Stephen Kijak’s messy structure and lack of probing insight. It’s a badly made film, pure and simple, but Kijak lucked out in that his film, though badly made, is not bad at all, entirely because his intermittently forthright subjects are fascinating people with a fascinating story to tell.

Love’em or hate’em (though if you hate them we can no longer be friends), it’s hard to argue with the Backstreet story. Assembled by a corrupt would-be titan when they were just teenagers, the Backstreet Boys scraped and clawed and went on awful bus tours to play shows at unreceptive high schools (Brian tells an amazing story about being booed offstage at an inner-city school when the sound system went down only to win the crowd back by completing the set a capella) then they, somewhat inexplicably, got huge in Europe. European tour after European tour eventually led to success in their home country (where their first record never even came out) and they went on to become the best-selling boy band in history, a title they still (and will likely always, considering the worldwide decline in music sales) hold.

Kijak’s substandard work here is really a shame, systematically cutting away to a completely unrelated topic just as one of his subjects is starting to really open up or a story is really getting good. Some interviews are shot from confounding angles; some are almost comically superficial (hey guys, Brian really likes basketball!). The scatterbrained structure of the film makes it hard to follow the jarring rise and fall of the band’s popularity and robs the present-day scenes of their satisfying redemptive quality. How many other boy bands trudge along ten years after they lost a member and fell off the charts- surviving on exhaustive touring and fan service- and eventually return to the drawing board, without a record deal, to try, for the first time ever, to write an album that’s really their own? Literally no other boy band ever. There’s so much story here it’s genuinely bizarre that the film isn’t better.

All things are not equal- something Mr. Backup Vocals Howie D learned the hard way over these 20+ years as a Backstreet Boy (he melancholically brokers that intriguing subject in the doc, only to have Kijak cut away to something less illuminating like a visit to his childhood home)- and that’s never more clear than in Show ‘Em What You’re Made Of where all the best parts shine the light on (who else?) Nick Carter. There’s some interesting Kevin material (he grew up in almost complete isolation on his family’s campground in Kentucky and his father’s death offers up some much-needed emotion) but he’s far too guarded to really let us in and Kijak doesn’t seem interested in asking too many tough questions about why he left the band. Even a startling story about Kevin finding a pre-rehab AJ at rock bottom and nearly beating him to a pulp is somewhat skirted over (as is AJ’s addiction in general and also his entire existence beyond being the one who is most out of breath on the big hike that adds obvious metaphor to the opening and closing scenes). There’s a very weird (and fantastically off-brand) moment when Kevin reveals that he learned how to say “will you give me a blow job?” in German during those extensive European tours but that’s about as revelatory as he ever gets.

Nick, on the other hand, is like one big walking exposed nerve ending and it’s kind of riveting to watch. A Brian girl through and through (nice guy goofballs for the win!), I never really got what everyone saw in Nick (man that kid was Popular) but he absolutely carries the documentary. Not only is his origin story the stuff of nightmares (there were routinely gunshots heard from his house) but, as the youngest in the band by a pretty large margin, he’s lived this strange lost-boy life and has an incredibly complicated relationship with the four bandmates who unwittingly replaced his real family. Nick has a lot of story to tell but what makes him the scene stealer is that- unlike Kevin and AJ who have great stories but are a bit too careful with how they tell them- Nick is incapable of hiding anything. He’s sensitive and rash and bold with a fiery temper that just unleashes unedited FEELINGS, which is particularly helpful because he, in turn, manages to do what Kijak cannot and stirs up actual reactions from his steadier, more mature cohorts.

The film’s best scene by far is one of the few that captures actual drama unfolding in front of the camera. A conversation about what songs should appear on the new album devolves into a screaming match when Nick unloads his fears and frustrations about the documentary’s only heretofore unknown and relevant-to-the-future revelation: Brian is losing his voice. Of course the film does a terrible job of explaining what exactly is happening or getting Brian to open up about it but the gist is that the group’s star singer can no longer perform at the level he used to and it’s progressively getting worse. Around this fight scene, Kijak does his best work, laying down the key information about the relationship we’re seeing in complete turmoil: in the early years, Brian and Nick were completely inseparable (brothers, best friends, a pseudo guardian relationship even; remember that Nick is essentially Peter Pan when it comes to actual parental supervision) but when Brian met Leighanne (his wife of 15 years), he got so caught up with her that he essentially abandoned Nick. I’m fascinated by this story, in no small part because it has very little to do with their larger-than-life careers and everything to do with complicated human dynamics at their most relatable. Isolated on the road and younger than all the other guys without any of the connections or the overwhelming faith that kept Brian grounded, Nick (whose runaway popularity was so much more overwhelming than, say, Howie’s) would have needed his best friend in irreplaceable ways and abandoning him feels almost unforgivable. But Brian didn’t do anything wrong; he got older (he’s five years older than Nick to begin with), he fell in love, his priorities shifted, there was clearly no malice at all in his growing apart from Nick. Prompted by a mild disagreement about some minor album detail, decades of resentment and anger come bubbling out of Nick Carter in front of Kijak’s camera. He screams at Brian- pulling out intriguing defence mechanisms and surprising harsh words from the band’s signature “nice guy”- fury mixing with fear and disappointment and years of pressure and bizarre power dynamics. At some point, the fight becomes about Brian’s refusal to deal with his vocal issues, Nick pointing out the double standard of the band intervening with AJ’s addiction and Nick’s weight problems and drinking compared to the collective silence on the issue of Brian’s voice, which arguably has just as much (if not more) practical effect on the band. Nick presents his argument using a basketball reference (note: the sport they bonded over back in the day), accurately characterizing the two of them as the band’s Jordan and Pippen (the fact that he openly repeats this fact in front of the guys he’s essentially calling the “other ones” is a whole other fascinating issue. Oh for a glimpse into Howie’s surely resentful mind). He calls Brian the Jordan (maybe he’s deferring to drive home his point, or maybe he really has always felt inferior to Brian, who knows?) and essentially what he’s saying (without saying it, obviously) is that if Brian loses his voice it will be the physical manifestation of his emotional abandonment years earlier; Pippen will be left alone on the court with no one to pass to (again, sorry other guys; you don’t count).

You know how it’s always more heartbreaking when something tragic happens on a sitcom over a serious drama? That’s what it’s like watching a knock-down, drag-out fight between Nick Carter and Brian Littrell. These are nice, pretty boys who sit on stools and harmonize about how they’ll never break your heart, they’re not supposed to be so full of rage and hurt and crippling fear. But they are, because they’re people. And Nick Carter shows us that, because he was suspended in time at the age of 12 and apparently never built the walls that protect the other Backstreet Boys from giant explosions of feelings. It’s sad and it’s worrying but it makes for a truly brilliant few moments of documentary footage and elevates Show ‘Em What You’re Made Of from interesting but mishandled puff piece to a thing of genuine human interest.

When this film was announced, a lot of people assumed it was a concert film with some behind the scenes bits like most modern music docs. It’s not. This is a documentary, an actual attempt to study a subject and illuminate it somehow. Thanks in almost no part to Kijak’s actual filmmaking, the Backstreet Boys have been illuminated and they’re a heavily scarred sight to see.