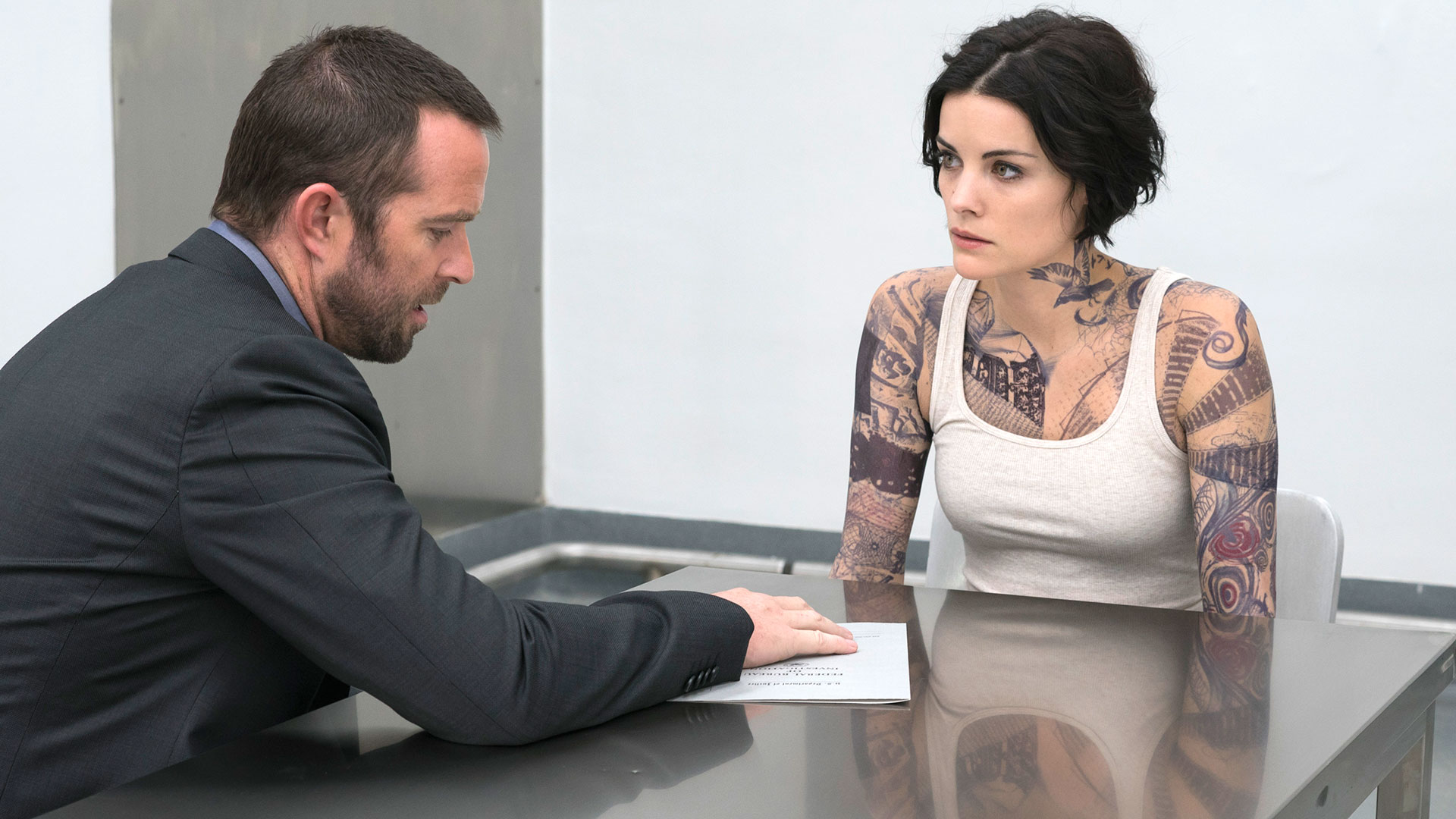 The premise of Blindspot reads like a bad soap opera meets buddy cop show. To summarize: Girl wakes up with a case of amnesia and hundreds of newly inked tattoos covering her body. One of said tattoos reads the name of an FBI agent and suddenly girl meets boy. Boy is immediately in charge of investigation to discover girl’s origins and while slowly unraveling the mystery of her tattoos they stumble upon the procedural case of the week. Girl pleads with FBI boy to let her join him out in the field, and while boy is reluctant, everyone else thinks it’s a good idea. Girl joins boy and surprise girl can kick some serious butt! Boy savess hundreds of lives, but girl ultimately saves boy and the two fall madly in love. Alright, so the “madly in love” piece didn’t happen yet but it’s got to be soon, right?

There’s a lot of moments that made me cringe during the premiere. The first is easily just Jane Doe crawling nude out of a duffel bag in the middle of Time Square. Anyone who has seen the previews knew this was coming but it was such a gross opening for me. She wasn’t gross, don’t get me wrong, in fact she was the opposite of gross and that’s what annoys me. Do we really need to start with a pretty naked lady to hook your audience? I mean you’re premiering after The Voice which I can only assume has a heavy female demographic…but I digress.

Later, Jane meets Kurt (the aforementioned FBI agent with his named inked on her body) after demanding that she speak to someone in charge. Kurt tells her that she needs to try and remember and asks if she recognizes him. So what does she do? She reaches out and touches his face, because that’s what blind people do and because she’s not blind. Yea, it makes no sense. Please slow down on the sexual tension people! It’s better if you let it gradually build (see Booth and Brennan, Buffy and Spike, Luke and Lorelei!). Then there’s (presumably) some awful foreshadowing when the doctor performs a coffee versus tea test and tells Jane that she needs to see what her body remembers. Flash forward to the end of the episode when Jane shoots a gun and her body remembers being at a shooting range. I could go on and on about the faults in the premiere (here’s looking at you: chemically induced state of amnesia) but I’ll stop there and give Blindspot the benefit of the doubt that with a little less exposition we might find a compelling story and hopefully a lot more character development (it’s lacking wit! I need wit!).

Even though it reads like a terrible soap opera and it has its downsides, Blindspot’s pilot managed to get a few things right. First, Jamie Alexander and Sullivan Stapleton are solid leads as our Jane Doe and FBI agent Kurt Weller. I have to admit that I found myself researching both actor’s prior roles. It’s somewhat refreshing to be watching a television series where I didn’t recognize either lead! I really can’t recall the last time that happened. Regardless, they don’t need to be big name actors because they both did an awesome job taking a so-so story and running with it. More specifically, I have to give kudos to Jamie Alexander who does an excellent job portraying the confusing emotions of a woman who has no idea who she is. And I cannot discredit the sense of intrigue from the overall mystery, but more importantly, from the mysterious bearded man. This guy first shows up when Kurt and Jane are visiting a Chinese man’s apartment (Jun) after Jane translates the name of an address off of her own body. Over at Jun’s apartment, creepy bearded man is first spotted leering at Jane from outside. Later, when Jane shoots Jun and saves the day, her body remembers (ehh) a time when she was at a shooting range with bearded man. Then, we get two final scenes with him toward the end: Jun’s in the hospital and bearded man comes to see him, makes some mention of how Jun was supposed to die so his sister could live, and then we hear Jun flat line. Then a flashback to bearded man telling Jane that her memory will be erased and Jane saying it’s her only choice. It’s nice to have a potential villain this early on but even better that we don’t know quite what to expect from him.

In summary, a really tacky plot with some embarrassing directing/writing mixed with a super strong actress and a dose of mystery makes for a decent pilot. I’ll give it another few episodes but I’m not sold just yet.