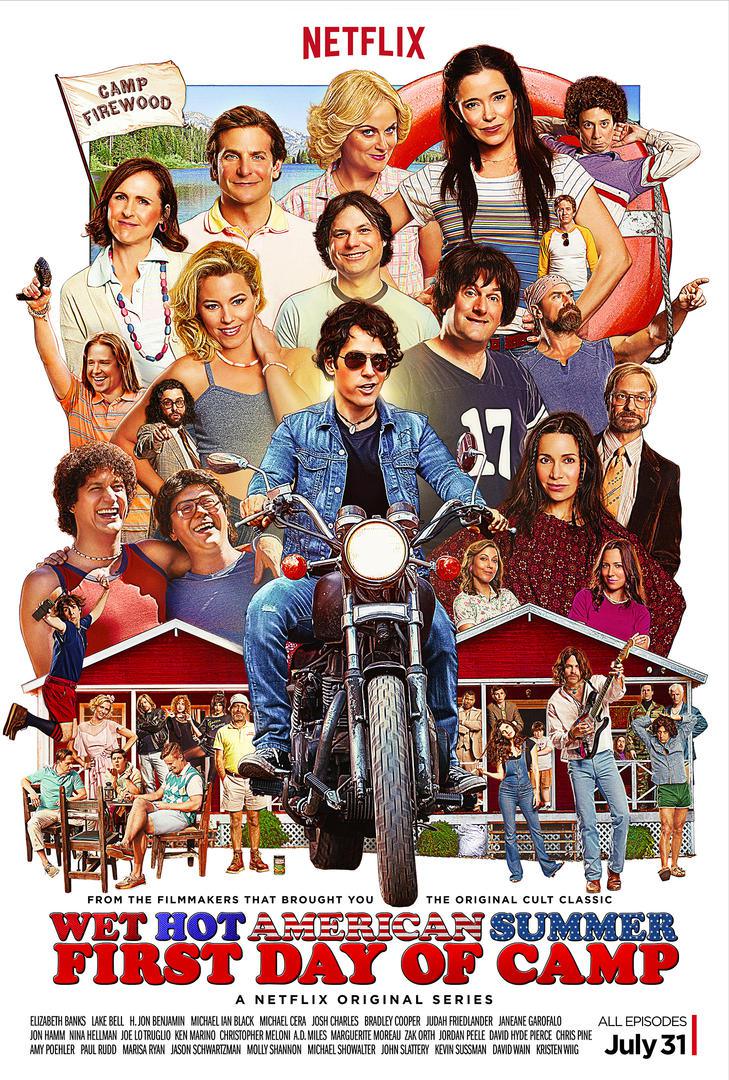 I’ve been obsessed with Wet Hot American Summer for years. It just gets me, and it only gets better the more you watch it. So I freaked out when I heard that they were making a prequel.

Yes, it was amazing to see everyone like Amy Poehler, Bradley Cooper, Elizabeth Banks, Paul Rudd, Janeane Garofalo, and Christopher Meloni all back together again after they all went on to be such big stars. They all agreed to come back years later and it really showed that they love Wet Hot American Summer just as much as the fans.

The eight episodes were jam-packed with hilarious joke after hilarious joke, but what was amazing, was that Wet Hot American Summer: First Day of Camp answered questions we didn’t even know we needed answered. But we did! We needed those answers.

In one of the funniest moments on the show, we learned that Abby Bernstein was actually a camper the whole time and transformed after getting her first period.

Lindsay, meanwhile, wasn’t a counselor at all, but was really an undercover journalist doing a story on Camp Firewood, and eventually Chris Pines’ Eric.

Of course, there were the requisite romances. Coop’s new (or old since this was a prequel) obsession was with Donna. Naturally, things didn’t work out.

Ben and McKinley started their relationship while they were working together on Susie’s musical Electro-City.

And we finally saw how Katie and Andy got together. He was determined to win her over and she finally left her boyfriend Blake from the evil camp Tigerclaw for him. One of the funniest moments from the season was Rudd just going “pft” over and over again for what felt like a good minute.

The overarching story centered around the camp’s battle with Xenstar. Xenstar was dumping toxic waste by Camp Firewood and Mitch, the head of the camp, fell in and became the can of vegetables that befriended Gene in Wet Hot American Summer. We actually learned that Gene was going by the name Jonas and used to be in the army.

The season culminated in an amazing moment when Camp Tigerclaw came to take on Camp Forewood after Katie left Blake. Fortunately, the reclusive, troubled, but genius rockstar Eric won them over through his song “Higher and Higher,” so we finally learned where the song came from. It was a perfect moment. Of course, they’d all come together through song.

Meanwhile, Beth won her case and Xenstar was supposed to get rid of the toxic waste, but the government decided to destroy them instead. Eric tried to fix it all with the power of song again, but he got shot! But we soon learned that he somehow miraculously survived.

Overall, I loved Wet Hot American Summer: First Day of Camp. It was just a lot of fun, and it had some great inside jokes. The storyline with the campers and their crushes seemed unnecessary with all of the other amazing storylines going on. But, hey, it is about a camp. We have to see at least some campers in there.