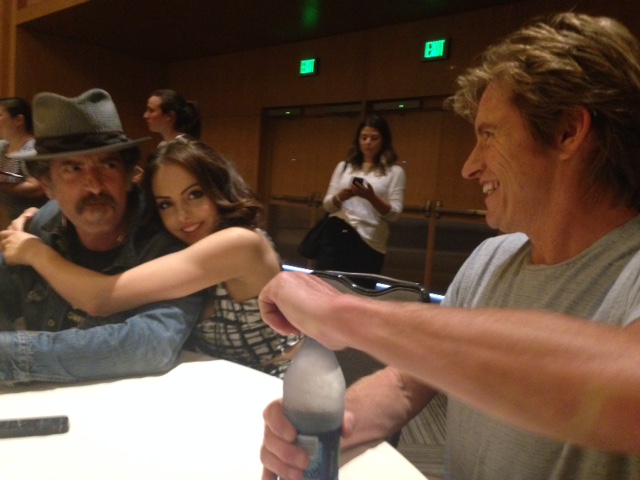 FX’s latest comedy courtesy of everyone’s favourite Irish-American loudmouth Denis Leary just premiered a few weeks ago with a killer pilot that set up a washed-up band reunited by a talented, manipulative, well-funded vixen who happens to be the former frontman’s long-lost daughter. Now, 4 episodes into the 10-episode first season, the show is proving a real summer breakout and a perfect fit for the impossibly consistent but ever-adventurous FX lineup.

The press room promoting the show at Comic-Con included the surreal experience of meeting one of the great villains of my childhood (Elaine Hendrix, who plays Ava in the show, was the wicked stepmother in the Parent Trap but is delightful in real life) and one of my biggest Hollywood crushes (John Corbett, be still my beating heart). We also got to experience the fun banter between John Ales and Robert Kelly (the band-within-the-show’s bassist and drummer, respectively) and the delight of a refreshingly disarming Leary who took a few minutes out of nonchalantly flipping through my notebook to exuberantly praise his fierce young co-star Elizabeth Gillies.

Here are some of the highlights from the roundtables:

When asked about the genesis of the show, creator Denis Leary says “I have a bunch of friends who I went to college with who dropped out of school and became professional musicians. They’ve been working musicians in rock & roll for like 30 years- great session players and stuff. My friend Greg Dulli [whom he shouts out on the show] is the lead singer and songwriter for The Afghan Whigs. That band got famous right when I was getting famous- I met Dave Grohl at the MTV Awards when he was in Nirvana- so I was exposed to a lot of rock & roll and I got to go backstage and see these fights about ‘I shoulda had a solo; your solo was longer than mine; you’re wearing that? Why do you have that?’. I thought this is really a great idea for a show”.

But he adds one practical caveat: “At the end of Rescue Me, I wanted to do a half hour if I was gonna go back to TV”.

Leary turns to Elizabeth Gillies, who plays his daughter, for her description of his character Johnny Rock. She calls him a “has-never-been” then adds “but he thinks he might-still-be“.

Gillies did a lot of the arrangements but Leary wrote the music for the show, just like his character does. But he’s self-deprecating about his contribution- “I was not dumb about it. I brought in Greg Dulli and most of the Afghan Whigs plus the guys from my comedy band who really came up with all that stuff”.

“She’s a great singer, she can literally sing anything” Leary adds about Gillies (who is, really, a Great singer).

She returns the compliment, “I like your voice a lot too; you have a rocker grit to your voice”, but he deflects, saying “I can sing the asshole song and the theme song to Sex&Drugs&Rock&Roll and That’s It! Really loud and really fast, I can do that, but she’s a real singer”.

“There’s something addictive about it, right?” John Ales replies to a reporter who says she loves the show. “It’s unusual for it to have such a serialized component” (“I’m not smart enough to know what that means” Robert Kelly chimes in; “who the hell uses ‘serialized’?!”). “You’re gonna freak out, it absolutely explodes”, according to Ales.

“I have several problems” says Ales when asked to describe his character Rehab. But Kelly’s Bam Bam has a less common rock&roll substance abuse problem- “I like food, it’s my addiction; so if you put a tater tot in front of me, watch out”, he says.

“We’re the rhythm section of The Heathens- now The Assassins- and we’re always struggling for the spotlight” Kelly says, adding “you know, like a real band” with a laugh.

But when Ales attempts to rank each musician by the power they usually have in a band, Kelly takes issue with his placement of the drummer at the bottom of the totem pole. “Woah woah woah, the bassist should be below the drummer. We don’t even need you,” before Ales can argue, he raises a hand and proclaims “White Stripes!”.

Ales weakly offers up Simon & Garfunkle in response to Kelly’s question “name one band that doesn’t have a drummer” but the issue was pretty much settled once the White Stripes came into it.

John Corbett sings and plays guitar (he’s released multiple country albums; I have them, they’re not half bad) but most of the other people onscreen are new to the rock star gig. “I never played the drums in my life” says Kelly, adding that learning them for the show was “the hardest thing I’ve ever done in my life” but Ales says “he worked so hard and now he’s amazing”. Ales had never played bass before either so he and Kelly would practice while everyone else was sleeping, pissing off Corbett whose dressing room was right next to the rehearsal studio.

“20 years from now we’re gonna start a band called The Rehab & Bam Bam Show”. Kelly wants to call it “Bam Bam & Rehab” but Ales gets the final word: “I’m gonna let him call it whatever he wants, for now, because we will be litigating”.

“It’s a little deceiving but, as the show goes on it will become a bit more clear- Ava’s the one calling the shots” Hendrix says of her character, a back-up singer who has stood by her longtime love Johnny Rock long after everyone else abandoned him.

“All of his antics, I’ve been complicit in and completely fine with as well” she adds, pointing out that Johnny, at this point in his life, is far more “willing to settle down” than Ava. Though, if they are ready to settle down, it will be “in our own way, which may not be the conventional way; but that’s what makes us interesting”.

“Ava’s pretty wild”, she says but “the coolest chick. Ever” is “THE Joan Jett” who comes in to guest star in episode three. “She’s a real, big defining moment in the show, actually” Hendrix teases, pointing out how the particular power dynamics that emerge in that one short scene really reveal who the characters are and will be through the remainder of the show.

We didn’t get much time with Corbett because this incredibly hectic junket was running really late but he did have time to praise his co-stars, saying “Liz Gillies in real life can Really sing… which is pretty awesome for us”.

Revealing that it’s the 25th(!) anniversary of the premiere of Northern Exposure, Corbett talks about making a return to comedy by comparing his first hit show to his current one, calling them both “quirky and weird, filled with comedy but has it’s dramatic moments”.

Famed for choosing feel-good projects, he adds “the worst thing that can happen to me is ending up on one of those formulaic cop shows or medical dramas. I’m not gonna put anybody down but we all know the kind of shows that are on. Sometimes, as an actor, they whip a lot of money at ya and say ‘come aboard, jump on the good ship lollipop’ and they make it so tempting that you just do it but I don’t think you’re really satisfied because you’re not getting a chance to have fun and be funny, and improvise, and do it with Denis Leary! I mean, come on, man, who wants to stare at a corpse and go ‘uhhh, did you find a gun?’“.

No dull detective suits in SDRR, though; these guys are decked out like the real thing. “I have this hair that they spray up- it takes a half hour to get my hair just right- and I get these really nice clothes by John Barbados[sic], they’re super expensive, so you throw all this stuff on and you start walking around feeling like a real rock star. And then you get all this equipment; I play these great Gibson guitars that are sort of rare- you do feel special, I’m not gonna lie”. But when asked if he ever gets the urge to smash one of the Gibsons he sounds shocked and replies “Never! Never never never; I hate when I see them do that because, as a kid, I wanted one of those guitars”.

It should also be pointed out that John Corbett in real life is exactly like you imagine he’d be. He even calls the gathered reporters “these cats” without a hint of irony, which just feels so very John Corbett of him.