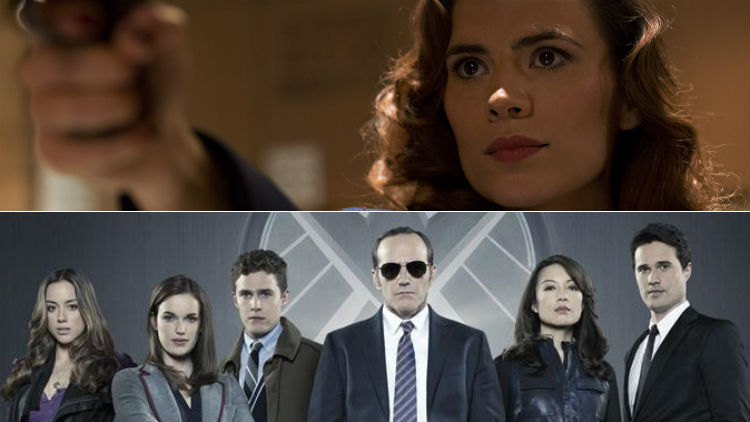 Agent Carter
First up for the Marvel TV panel was Agent Carter. It was attended by executive producers Chris Dingess, Tara Butters, and Michele Fazekas as well as series stars Hayley Atwell and James D’Arcy. Here’s some of what we learned:

Hayley Atwell said Peggy has “taken over my life” and described the character as “fearless”.

Atwell was asked whether or not Peggy’s decision to get rid of Steve Rogers’s blood at the end of Season 1 was the right one. She said yes. One, because it would be dangerous to keep in case it fell into the wrong hands. Two, because she had to let him go. Keeping Steve alive through her work was better and more fitting.

Atwell discussed the “I know my value. Anyone else’s opinion doesn’t really matter” line. She said it gives Peggy and the first season depth, and she was touched by the fan reaction to that quote.

Season 2 will pick up 6 months after the events of the first season. Michele Fazekas said the characters will be in “different positions”, and some of the characters aren’t talking to each other anymore. Season 2 will take place in Los Angles. The writers noted that the season will take place in 1947, the same year as the Black Dahlia murder, and they were interested in exploring the glamor and film noir atmosphere of classic Hollywood. Peggy will be called to Los Angeles to investigate a murder. Jarvis will already be in Beverly Hills when she arrives.

D’Arcy asked “Will I get to meet my wife?” to which there was no answer, so it looks like we’ll have to wait and see if we get to meet Mrs. Jarvis.

Cast members Clark Gregg, Chloe Bennet, Brett Dalton, Ming-na Wen, Elizabeth Henstridge, Iain De Caestecker, Adrienne Palicki, Nick Blood, Henry Simmons, and Luke Mitchell showed up to the Agents of S.H.I.E.L.D panel. It was a big cast given a short amount of time to talk, so they didn’t get to cover much, but here’s a little of what we did learn:

Nick Blood revealed that when he joined the cast, he flew straight to Los Angeles from London and was taken directly to set. He didn’t have time to shower or freshen up before being put in costume and make up and filming a dramatic scene with Lucy Lawless, upside down in an SUV.

When asked what they learned while making the show, Elizabeth Henstridge (Simmons) said, “I learned how to pronounce really long words that sound sciency, but who knows!”

The cast read the Season 1 scripts where Ward’s Hydra affiliations are revealed together. Chloe Bennet said her first reaction to finding out about Ward’s dark side was “I kissed him!” The censored version of Ming–na Wen’s first reaction was “I slept with him!”

The cast unveiled the blooper reel, which will be released with the Season 2 DVD later this year.

Season 3 is on its way. Showrunners Maurissa Tancharoen and Jed Whedon were not at the panel because they were in Los Angeles busy working on the next season.