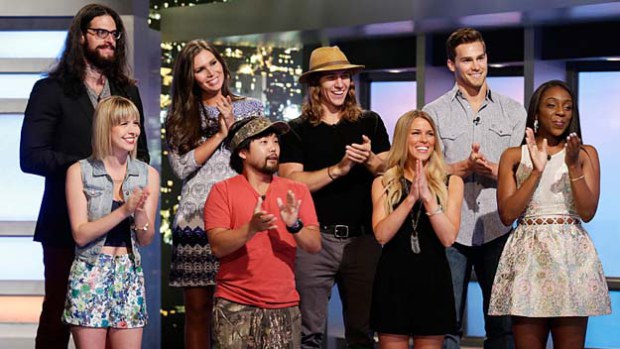 After such an amazing season last summer, it’s hard to be too excited about the return of Big Brother. With just five episodes under the belt, it’s still hard to be excited…but there’s some potential.

Let’s breakdown all of this year’s twists before we dive into the houseguests. Back on premiere night, Julie promised a summer of even more twists than ever before and she is already delivering with new twists every week. The first was the return of a fan favorite which ended up being Battle of the Block and subsequently two HOH winners per week. I’m not sure why we are even calling this a twist. I never doubted for a second that BoB would be back and if any of those houseguests were surprised, they should just self-evict. Toward the end of night, Julie shared that the next twist was the Twin Twist. She said two houseguests will be playing as one and switching off. If they both make it without being caught by the end of the 5th eviction, then the twin enters the house and they play as separate houseguests. I love this idea. I really do. It’s not a new one by any means as we all saw it back during Project DNA. Oddly, there is no reference to this being a reoccurring twist or it ever happening before (I mean you literally made a big deal about BoB being a “fan favorite” twist and I honestly thought Julie just read the cards wrong and meant to say that with the Twin Twist). The final twists of the two-night premiere were that The Amazing Race brought in two contestants: Jeff and Jackie and that they Vanessa and Da’Vonne (who volunteered to sit out of the HOH competition) were given a fast forward for themselves and two people of their choice to movie into the next week of the game (meaning they couldn’t be nominated or evicted this week). Wow…lot’s of twists and so little time. I have to hand it to Big Brother because if you really want to keep adding twists upon twists, the Big Brother Takeover is a great way to do it. And thus far it’s lead to two pretty cool guests in Phil from Amazing Race and Kathy Griffin!

In terms of early alliances so many things went wrong this week. Shelli, Audrey, and Da’Vonne were the first to form a secret alliance. I love a good girl’s alliance and was really hoping these three could stick it out but that last about two seconds. When Da’Vaonne was given the fast forward she chose not to give it to her secret alliance, which I thought was smart, but Audrey started to distrust her. Then the second James and Jason won HOH, Audrey and Da’Vonne jumped ship forming a brand new alliance with them. The master plan was to backdoor Jace, the super annoying “bro” of the season. For me, Da’Vonne and Audrey showed some great game play early on and they were skyrocketed to the top of my favorites list. Shortly thereafter, James was the remaining HOH and decided they needed more numbers in their alliance to solidify Jace’s exit, so they brought in perky hipster Meg and washboard abs Clay. This is wear my eyebrow started to raise a bit. I get that they needed more votes to secure an exit for Jace, but strategic players can certainly MAKE everyone feel as though they are part of an alliance without formally extending the offer. Regardless, it temporarily seems to work until Da’Vonne and Clay get into a fight over her being in the boys room…or something so stupid it isn’t even worth repeating. Da’Vonne cries because she hates liars, Clay doesn’t care, Audrey interviews and tells each of them the same thing separately about putting on a smile and mending fences, and then Da’Vonne accepts Clay’s fake apology and immediately distrusts Audrey. So much tension for this “alliance” already.

Flash forward a bit and it’s 5AM and Audrey is clearly sleep deprived because she starts corralling more troops for the alliance. This time she brings in Shelli and Jeff forming what I believe to be referred to as the “8 person alliance” until it inevitably falls apart or they create some cheesy name. SO many issues with this alliance. First, way to bring Shelli BACK after leaving her out for so long. If I were Shelli and found that I was person number 8 in this alliance, I would be pissed. She also likely will find out since her future showmance Clay was already part of the first 6! Second, why are you bringing in Jeff? Jeff is clearly going to align with his TAR partner Jackie! So now we easily have 9 people who are in the know about this alliance leaving only a few out (Jace, who was voted out anyways, and then the 6 other people who go no airtime yet).

All in all, this alliance will not last and these people are not playing very well just yet. Audrey, a frontrunner from the beginning, is quickly sealing her own fate as she is making big moves on behalf of her alliance without consulting them (just like Devin did last season!). She was also the only person to vote out Jackie which was clearly in an attempt to scapegoat someone else and target him/her next week. Da’Vonne, my other frontrunner, is already an emotional wreck and if anyone is a ticking time bomb I suspect it will be her. Shelli pulled out one of the HOH wins this week and I’m pretty excited to see what she does with her. At this point, Audrey is likely a big target on everyone’s radar but I wonder if her prior friendship with Shelli will keep her safe this week. I just hope Shelli plays it smart and doesn’t let a cute boy control her this week. I have no idea what Becky will do but she did say earlier in the week that she would try to get out Jason since he nominated her. With such a strategy and alliance heavy first week, I’m hoping this season can provide some entertainment but I’m doubting it will surprised BB16.

My favorite 5 so far (this is incredibly hard and WILL change):

5. Liz/Julia- I know they haven’t done anything yet, but I have to route for the twins. How much of a bummer would it be if the Twin Twist fails and they don’t get to play the game together? Also, major points for being the ONLY secret alliance in the house.

4. Shelli- I just have a feeling that she’ll be a powerful strategist. She could end up just being lovesick and too focused on Clay but there’s something about her I like. If she’s smart, she’ll nominate two people outside of her alliance, and then possibly use the Veto to backdoor Audrey, James, or Jason who are likely the biggest threats of their group.

3. Audrey- She shouldn’t be on this list but I’m giving her major points for her game play during the beginning of the week. I’m not confident Audrey will last another week but if she changes her in-your-face playing and stops lying, she could save herself.

2. Da’Vonne- Same as Audrey—she should not be on this list based on 2nd half of the week gameplay. That being said, everyone seems to like Da’Vonne and if her temper is kept under wraps, she could be a threat.

1. Jason- He was clearly cast to be the Frankie of this season. They wanted another in-your-face game player, but Jason has proven not to be that person! He was a humble HOH winner and tried to soften the blow of nominations by saying they were pawns (which in his defence, they were). Other than pissing of Becky, he left the HOH room largely unscathed. He’s also wisely letting Audrey be the leader of the alliance and taking a back seat. This should save him for several weeks.