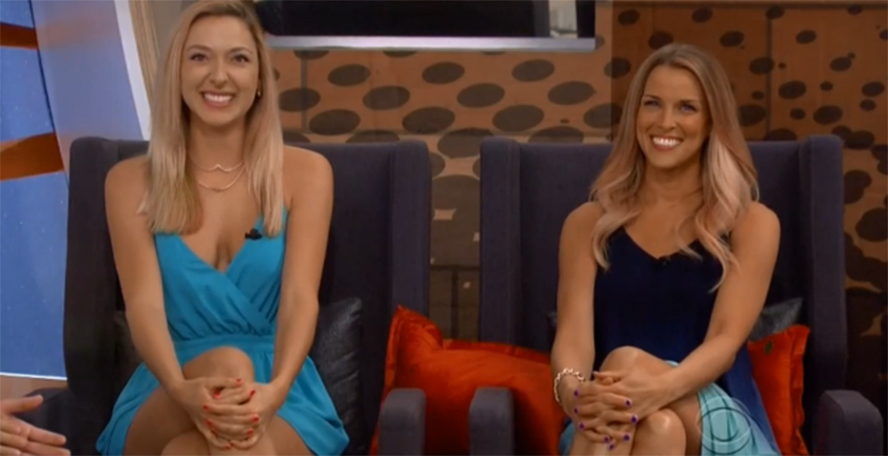 BB17: The Sixth Sense has Arrived

As time goes on, the houseguests in Big Brother seem to get wiser about needing to develop a strong alliance early on. Unfortunately, they don’t seem to learn one key lesson from their recent predecessors: alliances made in week one almost never last. Case in point: the all-girls alliance of DaVonne, Shelli, and Audrey. Second case in point: the alliance of James, Jason, Audrey, and then all of those people Audrey inevitably forced into joining the group. In recent years, it takes some time for the strong alliance to form and they seldom remain “hidden” for too long.

Ladies and gentleman, we have officially found our power alliance in the Sixth Sense. This alliance (which in reality has run the house since week 2) is made up of super-Barbie and Ken couple Shelli and Clay in addition to Austin, Vanessa, Liz and her “secret” twin Julia (those the namesake of the Sixth Sense). What was really interesting about the formation of this alliance was the Twin Twist! It really seemed as though the fact that Liz was a twin encouraged the rest of the group to work together and try to protect Liz in the hopes of gaining another number for their alliance. In theory, this is pretty genius. Clay and Shelli know they have each other’s back while Austin and Vanessa must be thinking that they have each other’s, which leaves the twins as the third pair.

So after the eviction of DaVonne (RIP to what could have been my favorite player of the season!), Austin and Vanessa gain control and win HOH. This basically leads to the formation of the Sixth Sense but more importantly we start to see some cracks in the newfound alliance as Vanessa suspects Austin of throwing the Veto competition. Now, Austin decided to throw it because he wanted Johnny Mack off the block so Jeff would go on…or so “Judas” claims. In reality, I think Austin’s wrestling days have turned his brain to mush and he’s disillusioned himself into thinking that he’s running the game. Vanessa sees right through him, and by luck manages to convince Austin to “call out” Jeff on a lie thereby creating a reason to put him on the block and not Audrey, the target of the house. What follows is a terrible display of acting in which Shelli proves she cannot lie for anything (“What the heck Jeff?..What the heck?”), Austin proves his wrestling skills are again all he has going for him when his “accusation” is just flat out ridiculous, and even Vanessa fails at bluffing (the poker player!). This team really needs to learn how to lie better.

Flash forward a bit and Jeff is nominated for eviction and leaves the house on Thursday. The only shocker during that eviction was Liz voting to keep him! A secret which she shares with Julia and Julia alone. As the night progresses, Liz and Shelli both win HOH and claim another week of rule by the Sixth Sense alliance.

Shelli nominated Jason and Johnny Mack this week, after Clay asked Johnny to throw the BOB Competition (for a third week in a row!). Her reason for nominating Jason was supposedly because Audrey said Jason was targeting Shelly, but I can’t buy that. I assume Shelli is smart enough to know that Jason is the only one with a brain left in the house so he’ll likely target her regardless of what anyone else says. Liz nominated James and Jackee but they somehow won BOB (without Johnny even trying to throw it for once!) so her nominations are safe this week. Meanwhile, Shelli tells Jason he’s nominated because of Audrey which is a super smart move on her end because she’s making Audrey’s target even bigger. Audrey admits she never hear Jason say anything about gunning for Shelli, and then Audrey cries when Shelli says she can’t trust her. WHEN WILL AUDREY LEARN? This girl might have sealed her fate this week. She better hope she gets to play and win VETO on Thursday or else her days are numbered. I do hope Shelli keeps her around 1 more week just the target remains on Audrey and off of Liz!

5) Johnny Mack- He has my favorite diary room comments. The guy is a beast at most competitions (especially veto!) and he’s just fun! I hope he rallies with the floaters and gives the Sixth Sense a run for their money.

4) Jason- The only person who could possibly rival the power alliance. If only he could win some competitions. I hope he survives this week!

3) Shelli- The girl does well at competitions, is social, and makes smart moves. The number one thing she has going against her is Clay. No way a showmance like that should make it past top 6.

2) Vanessa- I think her ability to bluff is not so great but she does appear to be a major source of intelligence for her alliance.

1) Clay- Do you notice how he’s the only person in his alliance who EVERYONE trusts? Literally, how many times does Jason confide in Clay and never once has he questions Clay’s allegiance. Clay is playing a smart two-sided game.