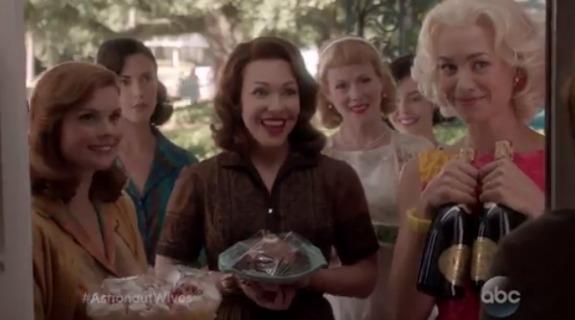 The first episode of this ABC summer series could be a lot stronger. The plot feels rushed and it’s hard to tell the wives- let alone their husbands- apart in the overwhelming sea of white people wearing pastel. That said, I trust showrunner Stephanie Savage implicitly when it comes to light but rewarding pulp TV so I have every confidence that The Astronaut Wives Club will sort itself into something I’m very sad to see canceled at the end of its 10-episode run (ABC has pushed this thing so many times, I’d be shocked to see it get a second season; poor Joanna Garcia just can’t catch a post-Reba break).

In addition to the always-charming Mrs. Swisher, the promising cast includes the great Evan Handler as well as Chuck’s Yvonne Strahovski in one of the only roles to stand out so far (think Jessica Chastain in The Help but less frazzled) and Wilson Bethel as her as yet mostly wordless husband. I was heartbroken by the inevitable cancelation of my beloved Hart of Dixie so I’m thrilled to see executive producer Savage already starting up with something new and I’m especially thrilled to see that she’s bringing Wade with her (not to mention fellow Schwartz-verse alum Strahovski). Erin Cummings and Odette Annable also make a few waves in the pilot though it definitely took some googling to sort out which was which. Azure Parsons plays the quietest wife in a way that suggests Savage and her writers might have something great in store for her soon.

Though the ensemble will likely grow to be the backbone of this show, the pilot’s focus is principally on Dominique McElligott’s chilly Louise Shepard and her husband Alan, the first American man in space (played by Dexter’s Desmond Harrington with shockingly little appeal). I’m hoping that the focus was the writers’ attempt to avoid over-stuffing the pilot because there are too many people in the wings here that I want to get to know and the couple currently occupying centre stage just isn’t engaging enough to watch in the leading roles week after week.

In the unlikely event that this series is given time to grow, we’ll likely see the more dynamic characters rise up to take the place of the pilot’s stars the way Chuck and Blair eventually usurped Dan and Serena (Schwartz-verse!). Or perhaps there’s more to Louise and Alan than the plot-packed first episode was able to show. Either way, I’m on board to follow Stephanie Savage to the moon and back so hopefully this series hangs on long enough to introduce a character named Neil.