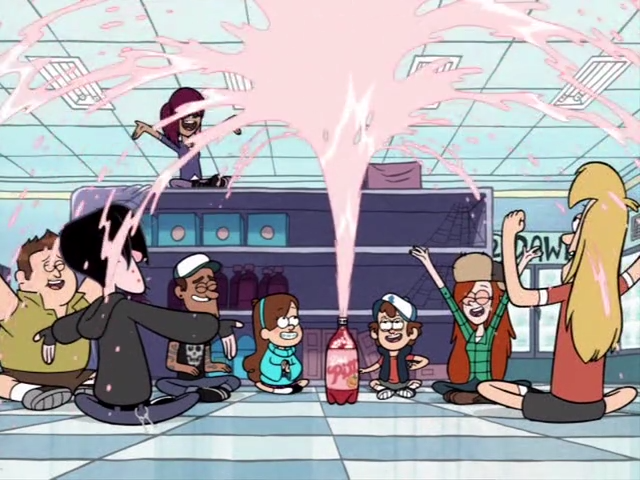 Now here’s what I’m talking about. Just five episodes in, and we’ve hit what is one the show’s best episodes. It’s in this episode that the show really starts to push against some of its boundaries while beginning to develop some depth in character writing.

We start off with the kids hanging out with Wendy at the shack. After being told to do some menial labour by Stan, they instead sneak away to relax with Wendy on the shack’s roof. During some good-natured pinecone tossing, Dipper gets some undeserved gravitas from Wendy. He’s really flattered by the way Wendy treats him as an equal even though she is much older. They develop a close bond through this shared secret and create their own personal symbol of this by zipping their lips and throwing away the key. Despite the fact that she is a girl and is very pretty (I’m talking about within the context of the show, you perv shamers) he is totally only interested in her as a close friend.

Even though the show opens up introducing Dipper’s crush as a concept and this is our first episode featuring Wendy as a main player, this episode is not really about unrequited love. Thankfully, this topic is saved for later and is saving grace, since we were just treated to the whole awkward relationship thing last episode

Really, this episode is all about age embarrassment. Being in that awkward “tween” stage, Dipper has fallen into the cliché of wanting to be older than he actually is. When Mabel and Wendy start having a random dance party, Dipper avoids it and tries to act cool.

Dipper tells them that he won’t join in because he doesn’t dance. Mabel says that isn’t true and starts talking about the “lamby lamby dance” that Dipper used to do before he shuts her up.

When Wendy starts to leave to hang out with her friends, Dipper asks if he and Mabel can go with. To seem cool and old enough to come along, he lies and says that he and Mabel are 13 years old. So Wendy brings them along and the twins get introduced to Robbie, Thompson, Tambry, Lee and Nate.

Robbie plays the biggest role amongst these new characters, since he almost acts as an antagonist to Dipper (while also being performed by the hilarious TJ Miller) after making a bad impression on him by stating that his spray-painted explosion looks like a muffin.

Robbie doesn’t react well to the insult and becomes Dipper’s rival going forward. While the rest of the group seems pretty keen on letting the two kids hang out with them, Robbie is the only one who keeps pushing them away by questioning their coolness and their age.

Following their introduction to the group, Dipper and Mabel join their new friends in Thompson’s blue van on a trip to Dusk 2 Dawn. They’re informed that the old shut-down convenience store is haunted by a couple that were murdered inside. During this whole scenario, Dipper is constantly being grilled about his size and age. Hurt by the way he’s getting treated, he proves himself by finding a way to break into the store. After unlocking the front door, he is dubbed with the official title of “Dr. Fun Times”.

Now that the kids are really getting some acceptance with the group, they both just let loose when everybody starts doing whatever they want. Mabel manages to find some Smile Dip, which was a candy banned in America.

The rest of the group starts having fun by putting ice down Thompson’s pants and they ask Dipper to go and grab some more ice, you know, for Thompson, so they can put even more ice down his pants.

On his way to grab some ice, Dipper looks in the freezer and is treated to this.

Yeah, so here’s where Gravity Falls goes ahead and tears away some of its cute and Disney-fied appearance. Besides whatever the hell this thing is, there is quite a lot more nightmare fuel to come out of this episode.

Trying to cover up the fact that he screamed and to keep up his cool façade, he distracts everyone with the Dancy Pants Revolution game. Then he sees this.

Dipper finally does get rattled, and only now starts to figure out a subtle way to get everyone to leave. Unlike myself, who would’ve ran babbling out the door after I saw the first creature, driven insane forever.

He tries to call Grunkle Stan for help, but unfortunately he is unavailable having been drawn into to the “Black and White Period Piece Old Lady Boring Movie Channel”.

Failing that, he tries for assistance from Mabel.

Without anyone to turn to, he tries to convince the group to leave and to not defile the crime scene outlines that the group finds behind the counter. The group immediately says he’s being a buzzkill and calls him a nine year old. Wow… They’re almost as fickle and as disloyal as the teenage friends that I had.

Feeling challenged, and still amazingly more concerned with being cool than avoiding death, Dipper flops down into the police outline, which immediately turns the poltergeist activity up to eleven.

Most of the group starts dissipating and end up inside of various things throughout the store. Thompson ends up inside the DPR game he was playing and starts getting stabbed by the falling arrows, Tambry ends up inside the security monitors, Nate is turned into a hot dog on one of the heating rollers and, most ominous of all, Lee is put onto the image on a box of cereal and then this happens:

Meanwhile, Mabel’s now-possessed body starts floating around the room affirming to them that they are all going to die here. Just to state the obvious.

Dipper starts questioning why the ghosts are so intent on making them suffer, and Wendy replies that she doesn’t know. She says that they were all doing normal teenage things. This sparks a revelation in Dipper and, despite his need to feel old and cool, reveals to the ghost that he is not a teenager. This causes the ghosts to show their true forms, Ma and Pa, the former storeowners.

It turns out that when they were alive they banned teens from the store for being rude and wearing short pants. The teens then fought this ban by playing their incredibly disrespectful rap music next to the store.

Obviously, due to this unbelievable amount of disrespect, Ma and Pa both had massive heart attacks and have kept teens out of the store ever since. Dipper requests that they all be allowed to leave alive and they tell him that they can go if he knows any cute child dances. Old people love cute kid dances, guys.

To save himself and his friends, Dipper is forced to embrace is cute kid-ness and does the “lamby lamby dance”. Pa is pleased and releases the group from the store. Everyone but Dipper and Wendy completely forget everything and Wendy covers for Dipper and says he saved them from the ghosts by beating them with a bat. She then grins at Dipper while they zip their lips and throw away the key. This both saves Dipper’s reputation and furthers the crush fuel that he has for her.

This episode does a lot of things very well. By setting the horror scenario in a variety store and having the teens be loiterers, it gives the whole thing a real 80s vibe (since I don’t think teens really hang in convenience stores anymore, given that they’re too busy with their Nintendo iPads and such). Also, there’s definitely a “Nightmare On Elm Street” sort of feeling going on throughout the death scenarios, though this episode manages to be funnier and scarier than a bunch of those movies were.

Also, it handles Dipper’s angst about his youth quite well. It both acknowledges his wanting to be older while showing that he is still a kid and is more natural acting like one. Also, the show is more than willing to showcase the fact that it thinks that teens really can be shitheels and are often also over-compensating for their own shortcomings.

Once again, I like the fact that we were introduced to the idea that Dipper has a crush on Wendy but was only lightly alluded to in this episode. Giving the series time to allow emotions to bubble and showing us these subtle moments that make us understand why he would fall for Wendy gives the characters that much more depth.

Still early in the show run, the producers of Gravity Falls really gave viewers a treat here. Audiences saw some real moments joined with really great funny moments. But the biggest surprise was where the show was able to push some genuinely disturbing stuff into the episode and past the censors. Sometimes a “creepy” kids show is never really is able to create the needed atmosphere or isn’t allowed to show the visuals that will legitimately scare its audience. This would be the first time I would actually find the show pleasantly disturbing, but it definitely wouldn’t be the last.

The cryptogram at the end of this episode reads “ONWARDS AOSHIMA!” which refers to Mabel’s hallucination, which was named after series director John Aoshima.

I’ll leave you with the cute little dance that all of my future offspring will be forced to learn.