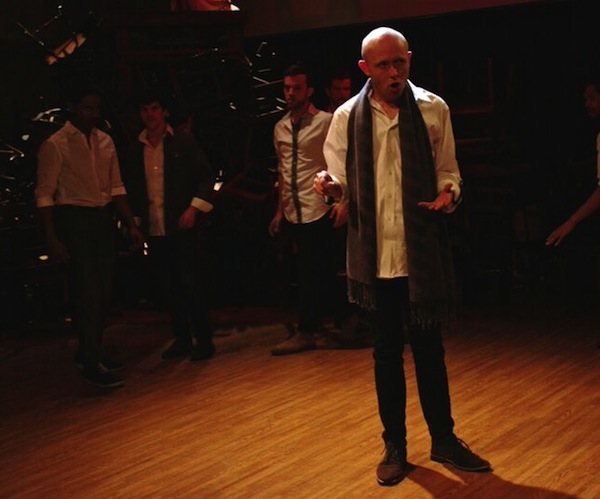 Bridge Repertory Theater lured audiences into a small hall at the Stanford Calderwood Pavilion to revive a classic story of political conspiracy and personal betrayal. Their distilled production of Shakespeare’s Julius Caesar, directed by Olivia D’Ambrosio, captured the essence of the play while (mostly) avoiding gimmicks. The result was a fleet and energetic show packed with passion and intelligence.

Skillful yet brutal cuts to the script resulted in a 100 minute production with no intermission. Minor characters were either cut or condensed. The soothsayer became a harmonizing duo (Lindsay Eagle and Anneke Reich), two priestess-like, marginal figures ignored by the other characters. These women announced the setting, context, and names of new characters introduced in major scenes, speeding up the audience’s comprehension of the plot. This framing device and the cuts proved elegant rather than reductive; if we want to get to the meat of the play, we can do without much of the text’s repetitive metaphors, minor characters, and technical need for significant set changes.

Shakespeare’s words and themes remained present in this lean packaging, fueled by this ensemble of talented actors. Every single performer remained fully focused throughout, and proved great maintainers of pace and sense of place. Though staging Rome with only twelve actors, the production was infused with strong physicality that made up for the lack of teeming multitudes, a lack inevitable in a minimalist version of Julius Caesar.

Brooks Reeves’ Caesar had incredible stage presence, dominating all three of the scenes the eponymous character is present in. Humorous in his surprising lack of glibness, menacing despite physical slightness, this leader is as full of neuroses as he is full of charisma and the personal touch with the common people. Reeves captured this complexity and shouldered the historical baggage of the character gracefully.

John Tracey’s Cassius was all cracker-jack impetuosity, an impulsive hothead rather than the sneaky, cool, cajoling manipulator Cassius can also be interpreted to be. Joe Short’s Brutus was a noble, often weary balm to Cassius’ flurry of anger and verbal barbs. Together, these two actors brought sparks and absolute clarity to dense lines that could easily become ceremonious and verbose when placed in the wrong hands. Reeves, Tracey, and Short’s performances were the rudder that steered this production to ultimate success.

While women are usually shortchanged in this play, there is much to enjoy here. Kate Paulsen’s Portia was full of quiet power and intelligence (as well as barely-contained fear). She convincingly portrayed a marriage between Portia and Brutus based on companionship (if not equality). Bridgette Hayes’ Calpurnia was exciting and un-hysterical in her premonitory alarm and exhortations to Caesar to just stay home.

Along with the soothsayers, the only role turned female (pronouns and all) was that of Marc Antony, played by Tiffany Nicole Greene. While I have no arguments against a female Antony on principle, the reason for the gender change in this production was not evident to me, particularly given Antony’s martial role and his familiar relationship with Caesar in oh-so-masculine Rome. In any case, Greene’s restrained and deft performance as the avenging Antony pushed me to shrug off these reservations.

The biggest sin this production committed was poetically bulldozing a key scene: Caesar’s funeral. Antony had already been given the short end of the stick, line-wise, at the end of Caesar’s death scene. While for the most part I enjoyed the interjections and eerie harmonizing of the two shade-like soothsayers, I was annoyed that they sang loudly over Antony’s soliloquy. As Antony prophesied death and destruction over Caesar’s dead body (only suggested by a pool of light, a nice touch), the singing muddled the lines and therefore infused the scene with an unearned sense of dread.

Continuing in this misguided directorial vein, the production populated the subsequent funeral scene with three men (Bari Robinson, Juan C. Rodríguez, and Jacob Athyal) serving as a mob of angry and emotional plebeians. In their efforts to stage a roaring crowd, these actors obstructed the dramatic power of the scene with their increasingly loud, silly, and ape-like antics.

I understand the staging challenge at hand here. But when an actor, eyes childishly wide and mouth agape, goofily repeats some of the best lines in the play (taken from Antony’s “Friends, Romans, Countrymen” speech) at me, the audience member sitting inches away, I can’t help but roll my eyes. The fickleness and immaturity of the citizens is key to the scene, but ramping up their buffoonery made the drama lapse into bathos, and undermined the incredible momentum the production had built up until then.

I couldn’t shake that unfortunate feeling of being condescended to until Brutus and Cassius’ fantastic argument in Brutus’ tent. The urgency had returned: watching two men, close as brothers, argue violently while the fate of the empire hangs in the balance feels way more immediate and compelling than watching a group of actors holler and clamber skillfully over various set pieces. To not sound totally sour: I appreciated the mob’s merciless slaying of Cinna the Poet (Will Madden), an unfortunate bystander to the angry riot incited by Antony.

The set (design by Esme Allen) did not seem directly relevant to the overall setting of the play: a mountain of wooden chairs, evocative of an insurrectionist French barricade, made me think of the social and political upheaval central to Coriolanus more than so than the patrician intrigues central to Julius Caesar). The costume design (by Stephanie Brownell) felt more sensible, consisting of modern clothes in muted tones of grey, white, and brown, with trims of red or blue. I was quite pleased to read the online announcement that this production would be “100% certified toga free.”

But Stephen Petrilli’s lighting design and the production’s sound design were nothing-short of brilliant. Pools of light and shade helped create an even greater sense of intimacy than that brought to us by the small space. Said intimacy was often then smashed by startling flashes of light coupled with the appropriate sound cue (voices hissing, rumbles of thunder, etc.). These shocks reminded us that this is a Rome in upheaval, an empire that has descended into strife, war, and dangerous uncertainty.

Overall, this trim production presented a vivid Julius Caesar. Bridge Rep’s show felt urgent without being rushed, enhanced as it was by subtle lighting design, well-directed pauses, obvious dominion of the language, and skilled combat choreography. An impressive achievement.