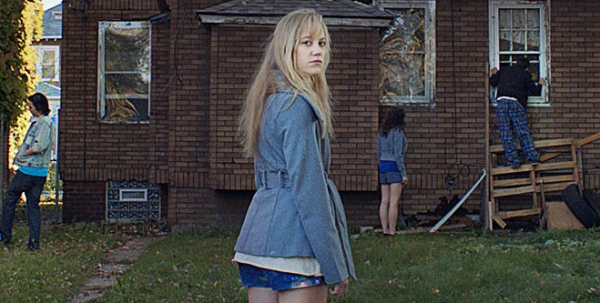 It Follows has a concept that sounds like it’s from a terrible B movie. An invisible, homicidal creature follows, at an incredibly slow pace, those that have sex with people that are already being followed. The comparison to B-movies is not entirely without merit, since the film clearly appears to pay homage to those types of 80’s flicks. But what makes this movie transcend typical bad films, as well as horror movie clichés, is its awesome sense of style.

There are a few more rules to this strange concept, which the movie gets out of the way with some very quick exposition in a rather effective scene. Shortly after having sex with her current boyfriend, Hugh (Jake Weary), Jay (Maika Monroe) is chloroformed and bound to a wheelchair. Hugh does this so that he can explain her current predicament.

Hugh had sex with someone who was being followed and has now passed the condition on to Jay. Anyone who has ever been followed can see the creature, but no one else can. The creature can take the appearance of any person, especially people that you know. Most importantly, the only way to stop “it” from following you is to pass it along like a bad chain mail letter (or STD) by having sex with someone else and having “it” follow them. Unfortunately, if “it” kills them, “it” comes after the last link in the chain and keeps going.

During this quick run-through of rules, Hugh allows Jay to see “it” as “it” approaches them in an abandoned parking lot. We are able to see that “it” walks at an incredibly slow, methodical pace (think zombie without shambling). He also allows “it” to get incredibly close to Jay to teach her, as well as to scare the bejeezus out of her and the rest of us.

And that’s it. He then drags her out of there and dumps her on her front lawn like yesterday’s garbage and peels off. She lies crying and confused while being approached by friends and authorities as they all assume that she must have been the victim of some sort of sexual crime. Not unlike Gremlins, we’ve got our rules and if you’re expecting any other answers, then you’re watching the wrong movie.

Jay’s world is completely upended by the end of the 10-minute mark, but our view of it becomes incredibly skewed shortly into the feature. This includes an unnerving opening horror tease sequence, which is strange and confusing at the start because it features an unnamed teen female running around in circles while wearing intricate heels.

Once we are introduced to the actual cast of characters, filmmaker David Robert Mitchell gets to work at making the world they live in off-putting before the creature even arrives. Things of note include the fact that adults are effectively a non-presence in this world. We are made aware that they exist, but they never become a part of story and Jay’s mother, in particular, remains faceless for the film’s runtime. Police authority is even presented as useless in the film, seeing as Jay and friends, in an effort to get some more answers, track down Hugh (whose real name is Jeff) with little effort before the cops manage come close. I’m not sure if this is supposed to make adult police appear non-present, or to make it look like they do not take sex crimes seriously.

In addition to that, the actual time period that the movie takes place in is constantly put into question, purposefully, to make it feel like the issues that our teens are dealing with are issues that have existed in every era. This time confusion is created by having the characters driving cars from the 50s to the 00’s, watching black and white horror flicks on large tube TVs with bunny ears, all while Jay’s younger sister is reading classical literature throughout the movie on a cell phone seashell-looking thing that doesn’t even exist in our time.

I would have also stated that the film appeared to be taking place in a run down version of Anywhere, USA. But, as some of the places the characters travel to appear to get more warped, decrepit and dirty it became obvious that our heroes were hanging around Detroit. That may sound mean and presumptuous but at the halfway mark, the movie finally tells us that it is taking place in Detroit… so there.

Of course, the real way that we are put on edge in this feature is not just the interesting art direction but the creature itself. What makes this film so interesting is that, partially due to creative cinematography, is that “it” remains terrifying whether it is present in the scene or not.

Despite having some strange person stalk her in a parking garage and, shortly after, at school, Jay does not entirely accept what is happening to her. This results in her, a little on edge, staying at home one night with friends to deal with her seemingly irrational fears. That night, “it” makes a house call and despite “its” pace, the slow chase-and-hide that Jay goes through while all her friends are convinced that she’s just seeing things, manages to be one of the scariest scenes I’ve seen in a horror movie in some time.

For the remainder of the film, the tension does not let up. The filmmaker allows our protagonist to investigate, live life and relax but keeps the audience on the edge of their seat until the title makes its first appearance at the end credits. By using camera angles that obscure our view of Jay’s surroundings, mixing in red herring follower sightings as well as “is that ‘it’ coming?” shots, we are constantly reminded that, however slowly, “it” is on its way.

One thing that makes the whole scenario even scarier, and even frustrating, is our protagonist’s lack of attentiveness. In a more typical horror movie fashion than this film regularly allows itself, our hero regularly seems to approach her current predicament with a sense of blasé detachment while we in the audience are constantly attempting to see where “it” might be coming from. This gets to the point where it is almost infuriating and, had I not been in the theater, I probably would’ve spent several portions of the movie screaming “turn the fuck around!”

Nonetheless, the movie is effectively keeping you on edge, even as it takes time to be a strangely nonchalant teen movie. Our heroes feel like real teens as they chat about their lives, how they feel about each other and just typically hang out doing seemingly dull teen stuff, even as a murderous shape-shifter inches towards them. At times, it feels like somebody took a Cronenberg movie and a Linklater movie and mashed them together.

Speaking of Cronenberg, that’s another apparent influence on the themes for this feature. The movie takes something that most of us were pretty excited for, teenage sex, and makes it terrifying. This is fitting, seeing as the growing amount of STDs as well as violent High School and College sex horror stories become more prevalent. “It” really manifests as both a sexual demon and metaphor for all the horrible things that can be associated with teenage sex. It’s no coincidence that Jay’s first sexual experience with Hugh ends with a scene that is reminiscent of the aftermath of a rape. It is also rather fitting that adults in the film have little to no presence, seeing as a lot of the worst stories of sexual violence, especially those against girls, are often accompanied by reports of authorities and teachers either not caring or turning a blind eye.

Jay is left to herself, with only her friends and siblings for support. Even they are nearly impossible to convince, despite the fact that it becomes almost irrefutable that something is going on. Not unlike a victim of this kind of atrocity, what really follows is a nightmare that becomes attached to the way that people view Jay, and a marring of every sexual experience she will ever have in the future. Despite the bleak picture that this creates, there is a quiet serenity that accompanies the support Jay finds in those that truly love her.

Now I’ve gone on about how the art direction and cinematography made some strategic moves to turn what could’ve been a dumb film into a horror that is both terrifying and cool at the same time. What I cannot leave without mentioning is how masterful the score is. The 80’s inspired synth score composed by Disasterpiece is just awesome, and is a major part of how this film feels. It ranges from tracks and scenes that are moody and ethereal to those that are pounding, painfully loud and pants-shittingly scary. I was just listening to it in my car the other day (yeah, the tracks are THAT good) and one of them gave me the shakes even without the visuals to accompany it.

So make sure you take the time to watch, and listen to, It Follows. Its inventive take on the genre manages to scare while also creating something wholly new. Just make sure to look around you before start it and always, ALWAYS, have more than one exit.